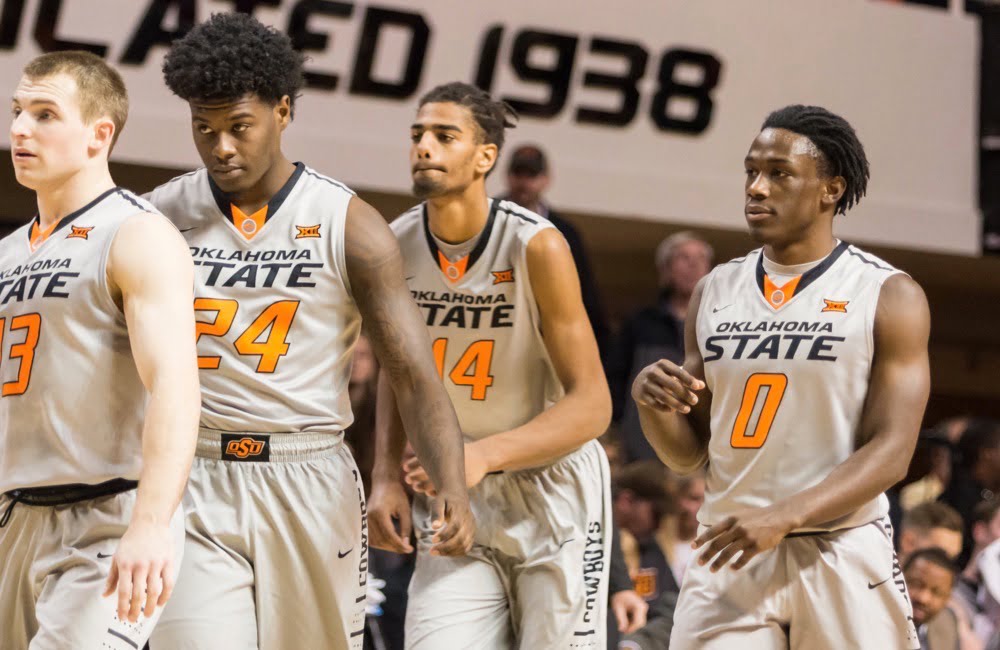 Goodness gracious, I forgot how much fun Cowboy basketball can be. It’s like we went from being Cleveland Browns’ fans to pulling for the Pittsburgh Steelers: hopeless to competitive almost overnight.

On deck is a nice home stand against the Baylor Bears on Wednesday at 6 p.m. followed by a late afternoon revenge game against a struggling Texas squad that KenPom doesn’t currently project as a favorite for the rest of the season.

Here are three things to watch this week.

1. A Tale of Two Quarters…. of Conference Play

While the Pokes have found unique ways to win each game, one hallmark of excellence has been the offense’s efficiency (No. 2 by KenPom currently). Kyle Porter did a fantastic piece on this recently, specifically outlining what that looked like in the West Virginia game. What confounds me is how Underwood has done this over the course of a season.

Quick primer: offensive efficiency favors those that take better shots while getting to the line and trimming the turnover number regardless of tempo. This is how Wisconsin and Kansas can both be efficient. One is slow. One is fast. It’s all about points per possession. And Underwood has these boys scoring lots of points by doing two particular things: taking the right shots and playing to the strengths of his dudes.

You have to use what you have and use it effectively. Nobody expects Mitchell Solomon to be Fred Jonzen playing with his back to the basket and Big Country isn’t walking through the door (with No. 50 on). But you can ask N’Guessan to float towards the rim, and you can ask Solomon to roll to the basket.

OSU’s offense is doing what it needs to do game by game. When someone stacks the lane, the Cowboys hit just enough threes to get the W. When you pressure them, they’ll lob it over your head for easy twos and when they need to kill a road losing streak it’s best just to shoot lights out and never put the end in doubt.

Another road game. Another Cowboy win. Help us pick the top plays from the win at No. 7 West Virginia. #okstate pic.twitter.com/meSMnD1JpG

One commenter on Kyle Cox’s tremendous five thoughts perceptively noted that Underwood “is turning water into wine with this team right now.” I agree and more particularly, he took a bunch of ingredients and he’s making a sweet (sixteen?) cake right now.

In the past, OSU has asked one guy (Byron Eaton, Marcus Smart, Jawun) to do everything from score to create shots for everyone. Now Underwood is asking Jawun to create within an offense that inherently creates shots, Solomon to suck up all the offensive rebounds, Phil to shoot threes and rally the troops, and Dillard to play defense and… keep doing this. (I can’t wait to watch a video of him at the end of the season)

Jeffrey Carroll is probably the poster boy for this as he’s went from a three point specialist to an offensive savant (17 points on six of nine shooting in the first half against WVU) that takes what the defense gives him. You put a Jayhawk jersey on that guy and he’s on all the lists. Back to the cake. Ford’s guys did well when one guy could take over while Underwood’s players impact them doing what they uniquely do well.

Lots of battling with the bigs this week as Texas boasts a pair of athletic rim protectors (Jarrett Allen and Shaq Cleare) as does Baylor (Johnathan Motley and Jo Lual-Acuil). The Pokes were held 30 below their season average the last time they played Baylor while a couple in particular struggled (Hammonds went 3 for 13 and Evans went 2 for 12). Forte went cold against UT a month ago shooting 2 for 12 from the field.

We all know how things have been lately and what will be most crucial is seeing how the defensive adjustment affects familiar competition. UT played aggressively downhill against the Pokes easily getting into the teeth of the defense and earned a ton of foul shots (33 to OSU’s 23 free throw attempts).

The Baylor game saw a similar dynamic as the Bears shot 30 free shots to OSU’s 20. As the Cowboy defense has done a better job at keeping offenses in front of them lately, it’ll be interesting to see if the offense is humming and the Pokes are getting good shots on the perimeter and if that free throw number evens out with the more conservative defense.