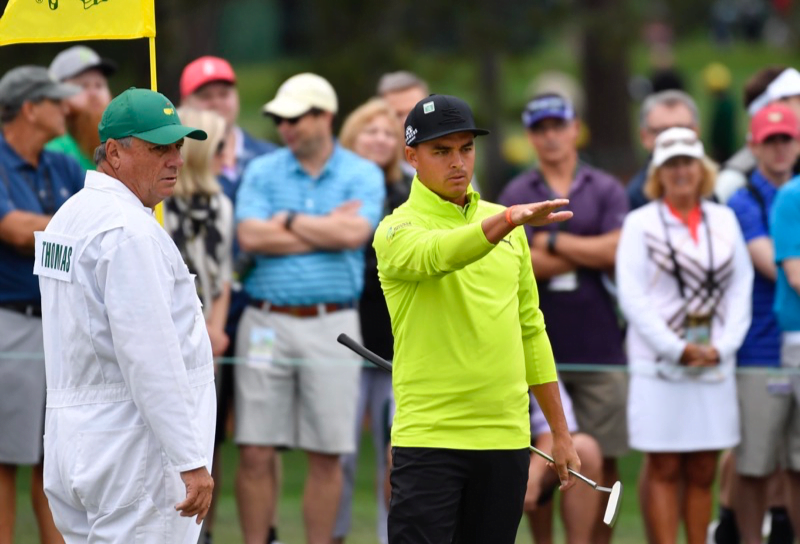 AUGUSTA, Ga. — Rickie Fowler is my pick to win the 2018 Masters. Mostly because I picked him in January after he won the 2017 Hero World Challenge in December and I got scared to go away from it. But there are legitimate reasons why he can grab his first-ever major at this course on this week.

Not a ton of them … but they do exist.

1. Penultimate pairing in 2017: Rickie was not hitting the ball very well last year, and he still figured out how to get into the second-to-last pairing on Sunday with Jordan Spieth. He putted out of his mind that week which kept him in it until late in the week, but he’s hitting it a lot better this time around (Fowler was No. 12 in strokes gained approaching the green going into last week’s Houston Open).

“I’ve been fortunate to be in contention here a couple times, and Saturdays and Sundays are special here when you do get that chance to be in there,” said Fowler this week. “It’s about time we have a real shot.

“I think we put ourselves in a great position last year going into the back nine. I didn’t have the back nine that I wanted, but it’s fun to be in the mix when the wind starts to die down and it starts to get really quiet and then you get the loud roars.”

2. Underrated history at Augusta: This is Rickie’s eighth consecutive Masters (related: we are all old), and he’s only missed one cut. While it’s true that he only has one top 10 finish here, he’s also finished in the top 12 in three of the last four years and has a better overall scoring average than two-time winner Bubba Watson (72.27 to 72.38).

“It’s a great fit,” Fowler said of the course this week. “Like I was talking about earlier, it’s more of the mental challenge of making sure that I pick the right shot and hitting the right shot at the right time … I know I can hit all the shots needed around here.

“So like I said, physically, golf swing‑wise, and my game, I know I can play and get around this place. It’s just more the mental battle.”

3. Hitting the average: The average number of times first-time winners have played this event before scoring their green jacket is six (51 golfers). Of those 51 golfers, 16 have won in their eighth try (or more) with last year’s champ Sergio Garcia holding the record with a win in his 19th try. Also, the average age of winners is just over 30. Fowler is 29 going into the event.

I realize these are not totally compelling numbers and that you might not trust Rick at major championships yet. But he’s going to win one. I’m not sure when or where or how it’s going to happen, but Fowler is too good to not notch at least one big game trophy (or jacket) before he hangs up the high tops and turns to a post-golf life of insurance and energy drink sales.