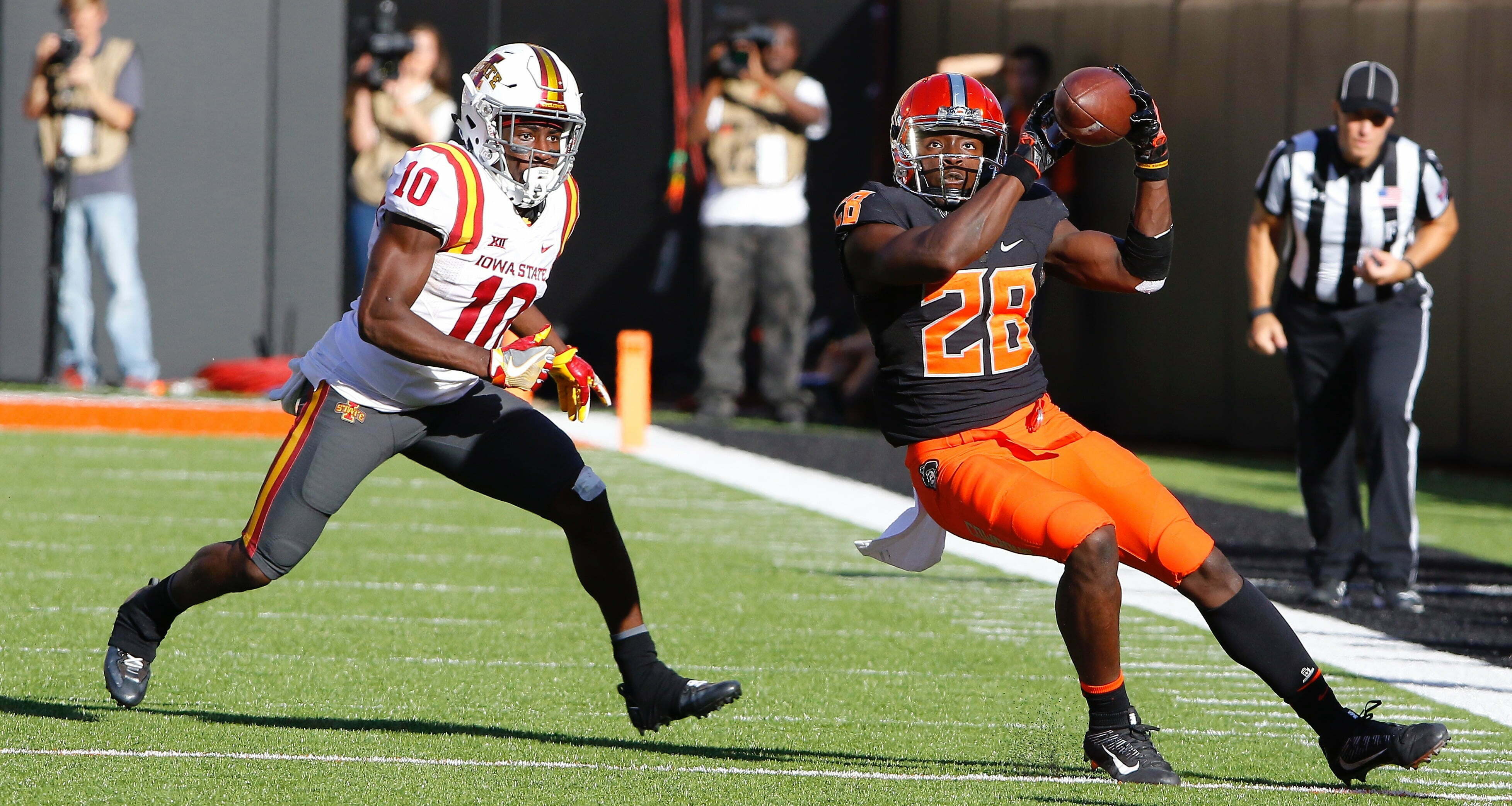 Here’s some numbers to keep an eye on for Bedlam 2016.

1. Explosive Plays Will Be Abundant

Unless you’re one of those “three yards and a cloud of dust” fans, you’re in for a treat this weekend. Saturday features two of the more explosive offenses in college football.

OU receiver Dede Westbrook has been gaining serious Heisman hype of late and here’s a big reason why: he has 11 touchdowns of greater than 40 yards (the previous school record was five). Westbrook and Joe Mixon combined average nearly four 20+ yard plays (3.91) each game, quite the duo.

The Cowboys have a strong counter in James Washington who leads the nation in 80+ yard plays from scrimmage (3). He averages 19.32 yards per catch, followed by the red hot Chris Lacy (16.17 ypc) and senior Jhajuan Seales (15.87), the three forming a deadly trio of deep threats.

2. Who wins the rushing battle?

They say football games are won in the trenches, no doubt Bedlam will be too. One of the better ground game match ups in recent history is in line between Sooners’ Joe Mixon and Samaje Perine against the Cowboys’ lightning and thunder attack of Justice Hill and Chris Carson.

Hill is a freshman All-America candidate averaging 106.8 yards per game in conference play and Carson has been virtually untackle-able since his return from injury (96 yards per game over the past three weeks).

Even more important could be controlling the time of possession where OU is second in the Big 12 just below the plodding K-State Snydercats. Air raid quarterbacks rely on rhythm and tempo so long, clock draining drives from either side are liable to throw the opposition into a funk.

Vincent Taylor & Co. will have their hands full this week, Mixon and Perine are a pair of complete backs that are hard to bring down and can take it the distance.

The Pokes don’t necessarily have to out rush OU (they’ve won four times this year without winning the ground battle) but it’d be tremendously helpful to keep the ball out of their hands.

It wouldn’t hurt to go ahead and win that ground battle, the Cowboys win nearly 80 percent of the time under Gundy when out-rushing the opposition.

3. Turnovers Will Be Everything

Spencer’s gang has been phenomenal in 2016, forcing a league-leading 23 turnovers (2.1 per game) on the year. OU hasn’t developed the same penchant for takeaways but has been hot lately, forcing seven turnovers over the past two games. The Cowboys are 60-7 (89.6 percent) when winning the turnover battle since 2005 so it seems like whoever wins this battle will be the favorite to win the war.

Coach Stoops was quoted saying that “turnovers are the most important statistic to keep track of” (thanks Bob) and will no doubt play a big part this week. The Cowboys are second in the league at forcing both fumbles and interceptions, if Mixon puts one on the ground or Baker hangs one up there for a double-covered Westbrook…

Could be time to break out the old #WTIB hashtag: