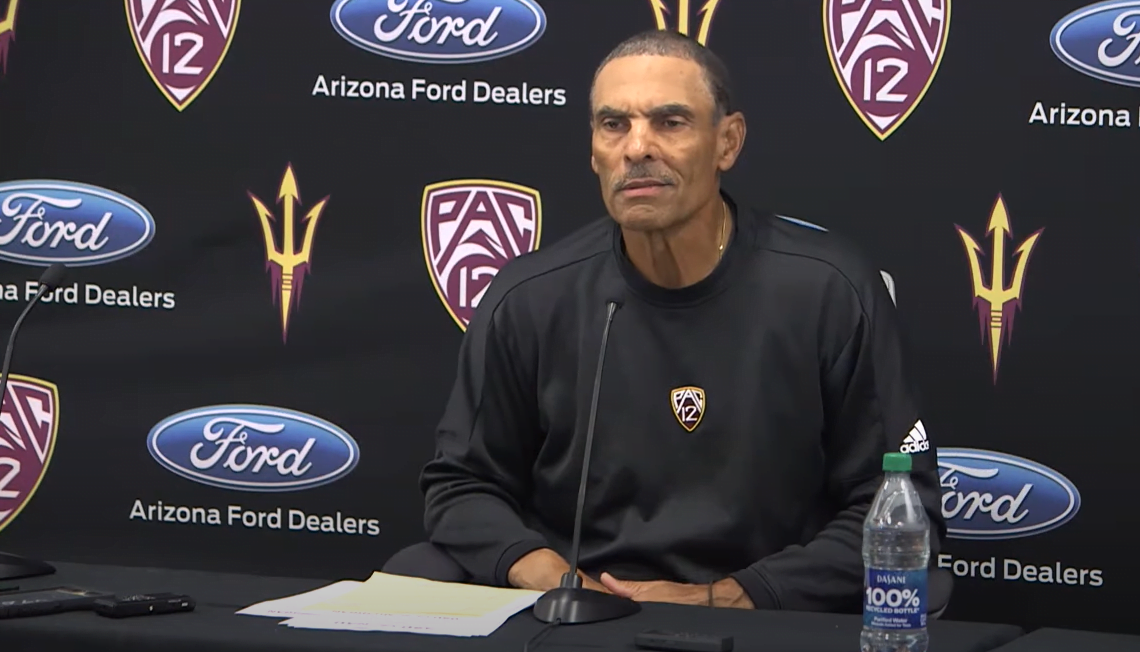 A decorated NFL player and coach, Herm Edwards is in Year 5 at Arizona State.

Edwards brings a 26-18 record to Boone Pickens Stadium this weekend as the Sun Devils’ coach. He met with reporters Monday ahead of ASU’s 6:30 p.m. Saturday kick against Oklahoma State. Here are three things he said.

Only one game into the 2022 season, the Sun Devils are already having to work around injuries.

The Sun Devils are also working through issues in the defensive backfield. Ed Woods, who started at corner against Northern Arizona, will miss this weekend’s game, but Arizona State is getting Timarcus Davis back, who missed the Sun Devils’ first game with a bruised knee. Jordan Clark, another DB, will be a game-time decision against OSU after missing Week 1.

“It’s the old statement, ‘Next guy up,’” Edwards said. “There’s nothing you can do about it. You got to play the guys that are available, and I tell guys that all the time, ‘You’re one hit away or a helmet coming off where you got to go in the game, and you got to prepare that way.’ That’s what football’s about. It’s really your preparation of the guys that might not be starters, might be in a rotation and all of a sudden, you’re in a starting role and instead of playing 20 plays, you got to play 50 plays. “

2. Spencer Sanders Is ‘Fun to Watch’

Spencer Sanders looked like he was playing Madden on rookie difficulty against Central Michigan, scoring five touchdowns before halftime.

He finished the first game of his redshirt senior season with 406 passing yards, 57 rushing yards and six total touchdowns. Those in attendance in Boone Pickens Stadium weren’t the only people impressed by his performance.

“The quarterback is really good,” Edwards said. “Watching him on tape, he’s kinda fun to watch. He can make an unannounced play, can extend plays, they have a gifted receiver corps, some good runners offensively — very explosive. They score points.

“… The key to me is the quarterback. How do you keep that guy in there? He’s just, he’s really, boy, he’s something. He’s fun to watch. He just makes all the throws, got a strong arm and they got some good receivers.”

Boone Pickens Stadium has developed a reputation that has expanded past Big 12 country.

The tightness of the sidelines, the paddle people, the funky things that happen there under night’s sky — it’s what college football is all about. Saturday will be the first time the Sun Devils play in the stadium since it’s renovation.

“Great venue to play in, obviously,” Edwards said. “We better be ready for that. It’s very noisy there. … Just the atmosphere of it and the caliber team you’re playing, too. Playing a very good football team, got a great home venue. It’s college football. You’re going down there, and it’s kind of what guys see on television. ‘Yeah, you’re gonna be on television. You’re gonna be in that stadium.'”