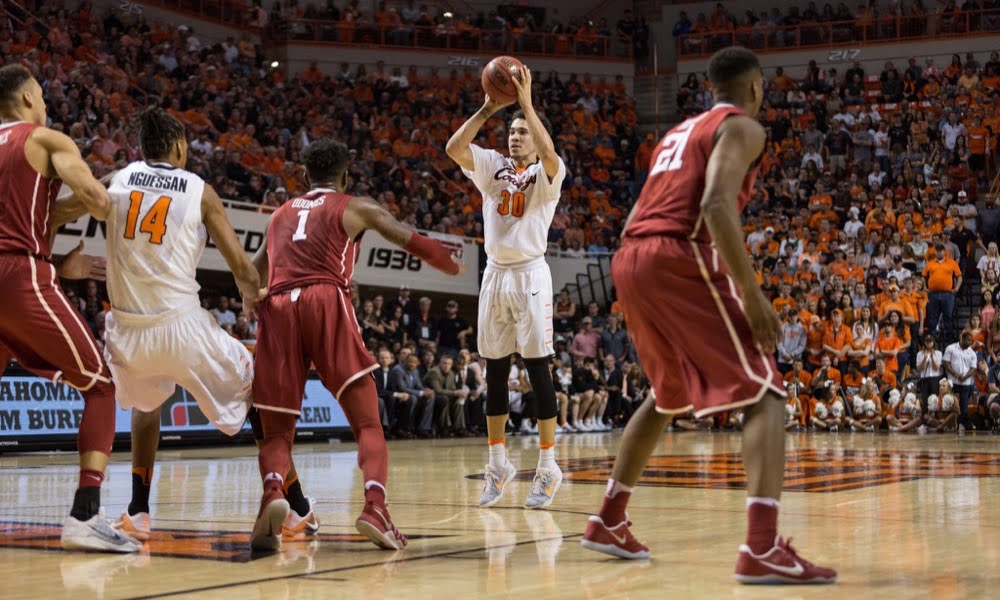 The first regular season under Brad Underwood is in the books, but the fun has just begun. The Cowboys draw Iowa State for the second time in nine days, tipping off this Thursday in the Big 12 Tournament.

Resumes are still out, and the closing arguments yet to be written. There are a few things to keep an eye on as the Pokes try to make another push up the seed lines.

Since the first week of February, the Pokes have played a one seed (Kansas), two seed (Baylor) four seed (West Virginia), six seed (Iowa State) and a bubble team (Kansas State). Finishing the season winning nine of your last twelve, losing a handful by a three-point shot (on average), merits reflection and a well-earned respite. But most importantly, don’t let your last two games beat you twice.

Confidence is built and Underwood’s teams have consistently made runs when you didn’t expect them to. They found ways to close, consistently forcing just enough stops and letting no. 1 do what first-teamers do.

Down 13 points to your biggest rival with 8:31 to play. No problem. Just give the ball to @j3vans1_. #bedlam #okstate pic.twitter.com/3MSO1gtkXy

So take a breather, watch Bedlam film (throw in some Texas Tech stuff for good measure) and remember what you’re made of. And why you’ll be one of 68 teams with a shot to bring home a title.

When you take a couple of the best offensive teams in college basketball to the closing seconds, it’s hard to complain. But as college basketball’s hottest team went from engulfed in flames to steamy, there’s a couple of things to focus on. Fate would have this week (likely) bringing the same schedule as the one before it – with a strong possibility Kansas is waiting if you beat Iowa State.

Reflecting on the Iowa State game, beating the Cyclones has just been an enormous monkey on the Cowboys back. Lose Thursday and that’ll make ten in a row. It’s the equivalent of OSU’s streak against Texas Tech in football: somewhat comparable programs but one team straight owns the rivalry.

There’s a few things the Cowboys could improve upon against Iowa State. The first goal should be run those dudes off the three point line. Senior Matt Thomas hit his first four before winding up seven of 11 from deep. Naz Long is just as capable, it’ll be important to play him tight. If you can make those guys (and Monte Morris) settle for midrange jumpers, it’s a lot easier to keep pace.

After that, mash the Cyclones on the board. They outrebounded Iowa State by 13 last week, keep that up. The Hoiberg-core of Cyclones are premium shooters and ball handlers but past bulky guard Deonte Burton, there’s not a lot of size or desire to hit the glass.

The Sprint Center turns into Hilton South (less than three hours from Des Moines, Iowa) so count on a someone contentious audience for that 11:30 a.m. tipoff.

Kansas, on the other hand, is the number one team in the country essentially playing the conference tournament on their home floor. Them’s the facts. Get Forte and Evans going quicker if you can, it’s all hands on deck playing those guys. After Saturday night’s game, Underwood harped on rebounds and how the Pokes needed to fight harder for those loose balls.

ICYMI: Check out the highlights from yet another great showdown with No. 1 Kansas in GIA. #seniorday #okstate pic.twitter.com/kG4ZwgE7ms

It felt like every time KU missed a shot, it bounced out to a cocked-and-loaded Frank Mason or Devonte’ Graham. They lost the rebound battle 42-30. Josh Jackson and Landon Lucas are motivated as bigs, but Lagerald Vick and Frank Mason both grabbed eight boards on the Cowboys — can’t happen against an offense more loaded than the Greatest Show on Turf.

3. Lock up the Seven

Other constraints (what other teams do) aside, it’s hard to imagine arguments being made that the Pokes are a worse team now then they were a week ago. A spot in the top half of a premier conference was secure, the only question was how high they could go. So what do the Pokes need to do in Kansas City to lock up the seven seed they’re currently projecting as?

Playing the four-seeded Cyclones, OSU hasn’t won an upset game since sneaking by a plodding Cornhusker team in March of 2011. While this team has been slaying all the dragons this year, the Cowboys have looked more overwhelmed than Rodgers and Hammerstein characters in Kansas City since Travis Ford was a new hire. It’s not unbelievable to think you couldn’t sneak into a seven seed with a close loss to Iowa State, but why put it in doubt? They say it’s difficult to beat a team three times and the Pokes were a Pistol Pete mustache hair from ruining senior night last week.

Give those Iowa State shooters a hard time and we’ll get to dreaming about six seeds.