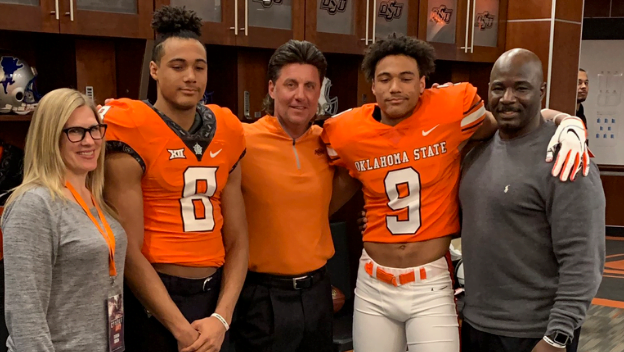 Four-star receivers Bryson and Blaine Green, twins from Allen, Texas, released top 10 lists over the weekend, with both naming OSU as a finalist to land their services. Here’s a look at who the two are and who OSU is contending with for the 2021 standouts.

Given that Bryson and Blaine have a near identical offer sheet, the cat’s out of the bag: they’re a packaged deal. Good luck separating twins. So that’s been the pitch from schools: come together and we’ll welcome you both.

Minnesota may have the upper hand in that pitch, though. Blaine and Bryson’s older brother, Seth Green, is set to be a senior at Minnesota in 2020 — the year before the twins will arrive in college. So while they wouldn’t get to play with their brother, they could perhaps follow in the family footsteps. Seth has brought down 13 touchdowns the last two seasons.

Contenders to land the twins

Blaine’s finalist are … exactly the same.

Right now OSU is leading in both their respective 247Sports crystal balls, but it’s still early in the process. Teams will inevitably fall out of contention while others enter the mix late.

Why getting both is important for OSU

Obviously if you get one, you probably get the other. But OSU needs both. Landon Wolf, Dillon Stoner and Tylan Wallace are entering their senior seasons so 2021 should shape up to be a fairly important receiver class on the recruiting trail to backfill their scholarships.