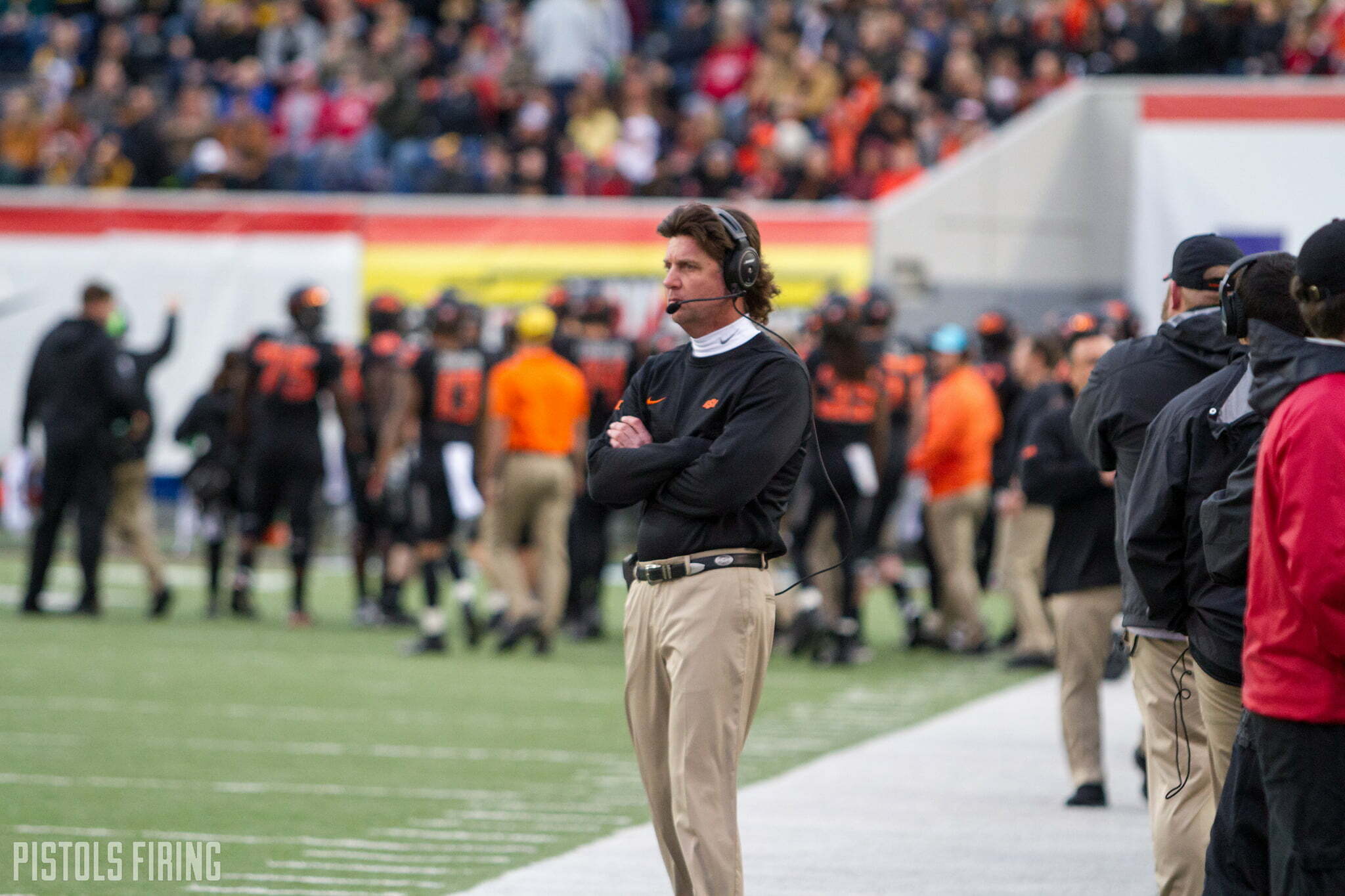 With Mike Gundy still searching for his next offensive coordinator, we don’t really know what to expect from Oklahoma State’s offensive scheme next season. I expect it to be similar to what we’ve seen in recent years, as I know Gundy likes the way the offense has been operating.

However, there are a couple of things I would like to see from the Pokes next season based on their personnel, no matter who they recruit to run the offense in 2019. I’ll cover these concepts below.

The “Tite” front defense has become a popular scheme for Big 12 teams in recent years. Iowa State and Texas, two of the top defenses in the conference, use the Tite front heavily in their defensive gameplans. In the past two seasons, Oklahoma State has averaged 3.3 yards per rushing attempt against the Longhorns and Cyclones, compared to a 5.1 yards per attempt average against all other opponents over the same two-year span. As you can see from these numbers, this defense has caused the Pokes some problem on the ground. In the image below you can see how this front lines up. 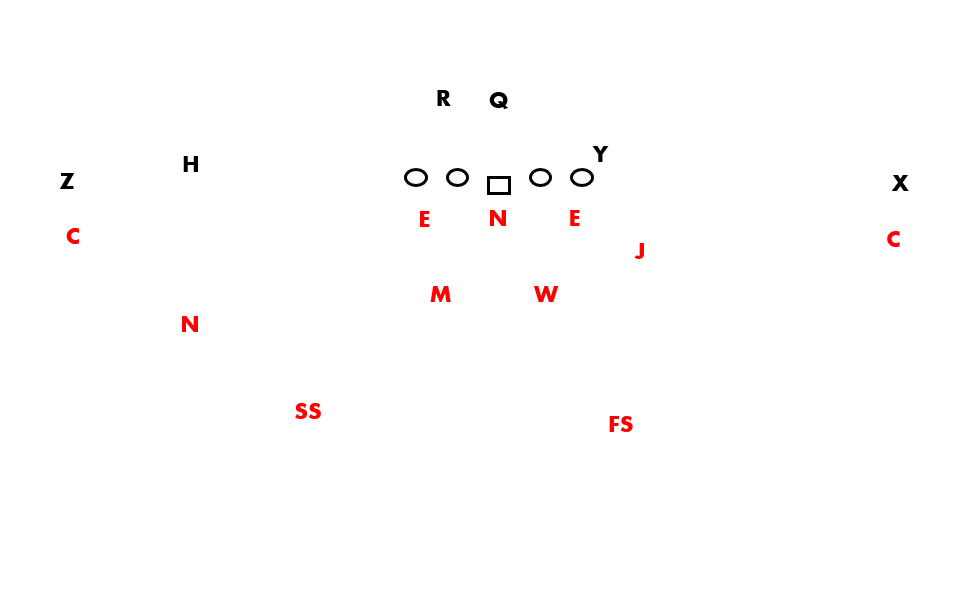 One way this front can be beaten is utilizing the quarterback running game. The Cowboys head into 2019 with two athletic quarterbacks in Dru Brown and Spencer Sanders, and I would like to see them use this to their advantage against Tite fronts. Taylor Cornelius was a very talented runner, but he lacked the lateral quickness to get by the 4i defensive lineman on his own, so the Cowboys had to get creative in their blocking schemes.

Two things I would like to see the Pokes implement in the quarterback running game with these more laterally quick QBs are the Zone Bash and the “Super” counter.

This is different from a typical zone-read play because the backside defensive end is not the read here. Murray and Sermon both move in the same direction and use the linebacker as their read on the outside. Murray will either give the ball to Sermon on the stretch, or keep it himself based on what the defense gives him.

In Iowa State’s Tite front shown below, with the defensive end on the top side of the screen crashing inside, the linebacker on that side is the only one in the first two levels who can make the play. Murray sees his guard is able to get to the second level and seal the linebacker, and with Sooner receiver Marquise Brown engaging with the defensive back on the outside, there’s no one left to slow Sermon down on the stretch.

The Athletic’s Ted Nguyen does a great job breaking down the “Super” counter in the video below. He’s also the one, to my knowledge, that came up with this naming convention.

The GT counter look, with the backside guard and tackle pulling, along with the running back moving out to the right as well, causes the Cyclone defense to flow toward this side. This gives OU quarterback Kyler Murray a favorable look on the wide receiver bubble screen to the left.

In the following video, you see Lincoln Riley dial up this “Super” counter again, only this time Murray keeps it.

The Cowboys ran something similar against West Virginia this year, which I know was one of Adam Lunt’s (host of the Tape Doesn’t Lie podcast) favorite plays of the season, shown in the clip below. However, next season I think they can throw in more wrinkles to this with the athleticism of their quarterbacks, as opposed to Dillon Stoner on the fly sweep.

In this first example from Notre Dame’s Rivals website Blue and Gold, the Irish go with a zone run look, which also has the options for the quarterback to keep the ball, or throw a pass out to his receiver. 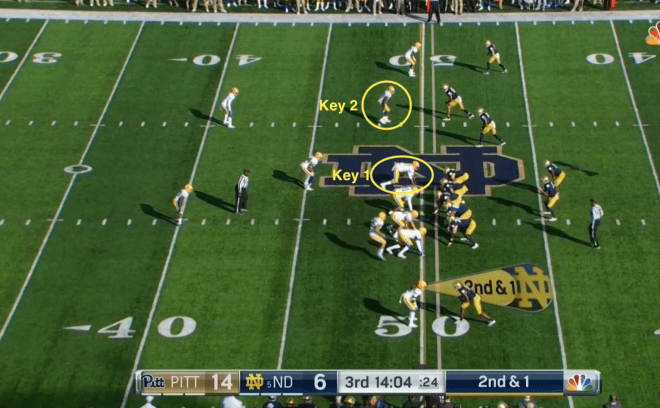 Here’s a video of the play shown in the image above in which Notre Dame is able to pickup the first down.

Long also gets very creative with the zone-read, as you will see in the next clip from his time at Memphis in 2016.

The three options on this play are the give to the running back on the inside zone, the QB keep around the outside or the pass to the bubble screen run by the slot receiver. However, what initially appears to be a bubble screen turns into something else as the outside receiver fakes the block and release up the field. SBNation’s Ian Boyd explains in more detail below.

What gets Houston into so much trouble on this play is the combination of the QB outside run and the “sucker” deep route by the outside WR. Houston appears to be playing 2-read here, so the safety should see the slot going shallow and get his eyes on the outside WR, but he doesn’t because he’s concerned about helping out against the RB or QB run. The corner is looking to blow up the block on the screen to help the nickel, who’s navigating the threat of the screen with the threat of the QB keeper on the edge.

When Memphis QB Riley Ferguson pulls up and chucks it down the field there’s no one at all to cover the deep WR. After that initial success, Memphis had Houston on their heels. [SB Nation]

These triple-option type of RPOs add together all of Oklahoma State’s offensive strengths in 2019. They give the option hand to Chuba Hubbard, keep the ball with Brown or Sanders or get the ball out to the many dynamic playmakers the Pokes have at wide receiver.