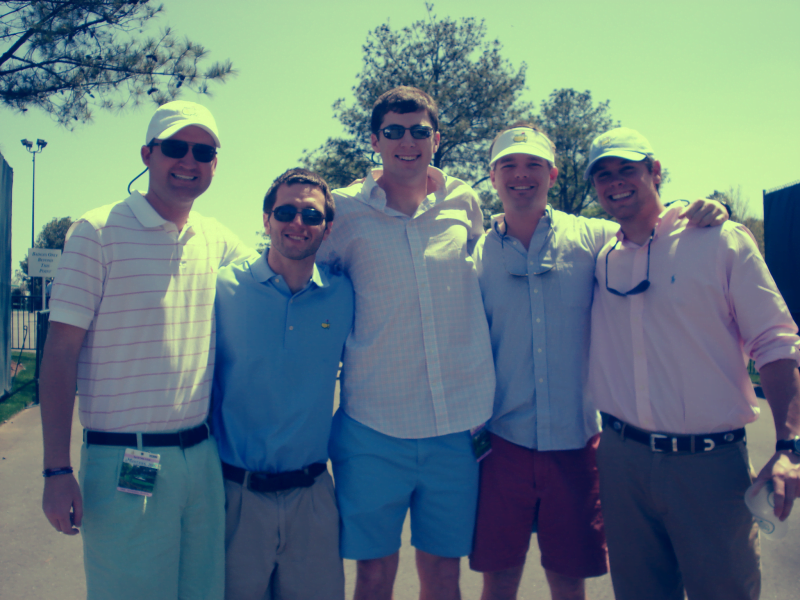 The story of how I went from rogue Oklahoma State blogger to lead golf writer at CBS in 23 months.

Much like Matt Norlander two years ago, I’m not too keen on writing this post, but I figured all of you would want to know what just happened, why it happened, how it happened, and what’s happening with PFB. Plus, the list of people I need to thank is lengthy.

When I started this blog in December 2010, I didn’t know what I was doing[1. Insert (you still don’t, your an idiot!) joke here.]. I knew I wanted to do something with my life that wasn’t boring and that didn’t involve the humdrum of commuting to work at the same time in the same way as the three million other people who live where I live (Dallas).

The reason I landed on this site as my entrepreneurial outlet of choice was because I felt like it involved the two things I knew enough about to trick everyone into think I knew a lot about: blogging and Oklahoma State.

The reality, I learned after a few months, was that I knew nothing.

Blogging is this odd, seemingly ephemeral, thing that people are scared to talk about. When you tell people you “blog” or you’re a “blogger” they oft look at you like you just finished off a spider sandwich: “dude…weird.”

And it’s true, blogging is in a lot of ways a very strange way to make a living. But it’s also about as much fun as I’ve ever had with any project I’ve undertaken.

This blog, Pistols Firing, has evolved too. From the time I broke the uniform news, to the tragedy of covering the Budke plane crash, to relating the Penn State scandal to OSU, to KD lighting up Stillwater (for a second time), to Bedlam, the Fiesta Bowl, the Masters, Bedlam again, all of it has traced a narrative in my life.

I’ve learned from it, grown because of it, been changed, changed some more, been encouraged, gotten upset, almost quit[2. I can’t even tell you how many times I almost quit, I wrote the “we’re not doing this anymore” post in my head dozens of times. I don’t know what kept me going — probably the allure of that Final Four-quality basketball product O-State has been putting out recently…], tried harder, wrote some truly awful posts, been (digitally) yelled at, and grown some more. Over and over.

When I started all of this back in December 2010 my wife and I agreed that I could work on it for 24 months and if it hadn’t 1.) produced an income that we could live off of[3. Let me say this in retrospect: LOL.] or 2.) led to another opportunity to write about sports full-time then we would talk about shutting it down.

Oh and about that…because that’s probably what you’re wondering about, maybe even why you’re reading this.

A few months ago, in the heart of college football season, a guy named Jonathan Wall (@jonathanrwall) started following my @pistolsguy account. I clicked on his profile, saw he was from Dallas, went to A&M, and wrote about golf for Yahoo! and I thought “oh, cool, I’ll follow him[4. My standards for following people are clearly high.].”

A few days later I sent him a DM and said “hey, saw you live in Dallas, we should get together sometime and talk about blogging.” Dude…weird.

For whatever reason, he accepted and we had lunch a few weeks later at a place in Dallas called Velvet Taco (great spot btw).

We chatted about the kind of things 20-somethings chat about — Heisman campaigns,  Augusta, our (very very short-lived) college sports careers, the Ryder Cup. All in all a great lunch and another friend “in the business” (as they say).

We continued to stay in touch on Twitter over the last few months until the weekend before Thanksgiving he told me that a guy named Shane Bacon was leaving his gig at CBS as their lead golf writer.

They both threw my name in the hat for the now-vacant spot and I ended up talking with the guy who’s now my editor on the day before Thanksgiving. I had an interview the Monday after Thanksgiving[5. Honestly, no idea how I dragged myself out of bed that day after the most Bedlam hangover (figuratively speaking) of all time.], and was hired that same day to be the new golf writer/blogger for CBS.

My first thought was, “wait….I watch and blog about golf (!) for a living now?!”

And really, the entire thing feels like a dream. One for which I have a massive list of people to thank. So let’s get at that…

My readers (even Nate) – this place would (literally) not be what it is without you. You keep me honest and hold me accountable every day. Thank you.

Eric Kay and Andrew DeWitt — for taking a chance on me to help run your site. I couldn’t be any more fired up.

KT King, Emily Nielsen, Anthony Slater, Brendon Morris, James Poling — all of you provided me with photos, posts, and ideas. And I wish you the best in each of your careers.

Royce Young, David Ubben, and Travis Haney — I appreciate you guys showing me the ropes of what it means to write/blog for a living, always helping me out when you didn’t have to, and being stand up friends.

Carson Cunningham and OKC Dave — thank you both for giving me ideas and always helping push this site forward, it wouldn’t be where it’s at without you. Thanks for “giving great effort.”

Nolan, Amilian, Quade — for trading ridiculous triple-digit email threads with me. And also for encouraging me, filling in for me when I was out, and (most of all) believing in me.

My family — for always supporting this even if you didn’t always understand what “blogging” was or why I was so into it. And to my dad especially for dropping that epic “do they pay you money?” line after I first told you about this CBS gig.

Jen — for letting me drone on for hours about ridiculous OSU uniform drama, bore you to tears with things like effective FG percentage and points per drive, and always offering your insightful opinions on who the Oklahoma State quarterback should be. You believe in me and I can’t imagine having made a better choice than you.

All of these people have invested either time, effort, or money into my career as an entrepreneurial writer/blogger — some, genuinely, for reasons that I am entirely unable to reciprocate — and I can’t thank them enough times. And there are dozens more I’m forgetting.

So I hope all of this, and mostly this self-aggrandizing post, is an encouragement to anybody out there who’s chasing something. I don’t want to make it seem that after 1,500+ posts I know what I’m doing now or that I earned any of this. I’ve been blessed with a sweet opportunity because some people (whom I barely know) went to bat for me.

But the lesson, as it often is, is to keep hustling after what you love. I love words and sports and ideas and entrepreneurship and somehow all of those have intersected at this moment in my life.

And I’m grateful for that…

Will you keep blogging at PFB?

Absolutely, posts might not be as frequent, but for now I’ll still be running it full-time (Bullets aren’t going anywhere).

Where can I read your golf stuff?

The @pistolsguy account will be an all-OSU feed. I will run most of it but might get some help from some of the guys (Nolan, Amilian) mentioned above.

This will be my new, personal and professional feed. Want to know about golf, what my wife and I are doing this weekend, how many times I can say “Augusta National” in one week — this is what you want to follow.

So is this your full-time job?

Yes, I quit my day job on Thursday, December 6th and I am now working for CBS full-time. I’m a #Quitter (great book btw).

Where is your office?

Here, at my house.

A bit, probably to the Masters, maybe the U.S. Open, and definitely to some tournaments around Texas.

A lot of what we do here at PFB — morning links, 10 thoughts, previews, infographics, etc.

You have no idea.