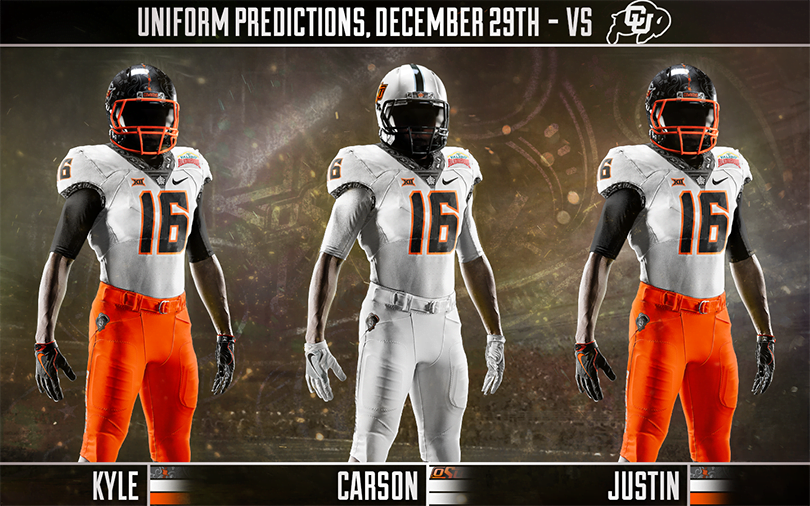 One last uniform prediction for the season. Carson has already locked up the uni title for 2016, and since Kyle and Southwell both picked the same thing, they will finish No. 2 and No. 3 respectively no matter what OSU wears on Thursday night. On to the predictions.

Porter: OSU has been showing off that paisley lid all week in press conferences and media gatherings. It feels like they’re going to wear it on Thursday which of course means they won’t. Also, it’s been a while since we’ve seen some orange. The bowl game is the right time to bust it out. Also, for my uni haters out there, here’s Jordan Sterns from earlier in the week.

“I’ve always liked Oklahoma State for some reason just growing up because of the colors and then just different things,” said Sterns.

Southwell: I don’t want to see the barbed wire helmet anymore after Bedlam, but it’s been posted up for media so it’s a likely possibility for this game. I’m thinking barbed wire paired with orange pants can still make a pretty great combo. I’m sure the equipment staff had a hunch that Colorado would wear their traditional Gold-Black-Gold combo. I would love to see us counter it with a traditional road look of our own (White-White-Orange or all white).

And for the last time this year. For the @valeroalamobowl our uniform combination will be … TRADITIONAL! #GoBuffs #theRISEisREAL pic.twitter.com/5L3EdWhsO4

Thanks to Chris Knox for his excellent work on these uniform previews all season. And congrats to Carson on his victory. The tables turned mightily in the Iowa State game.