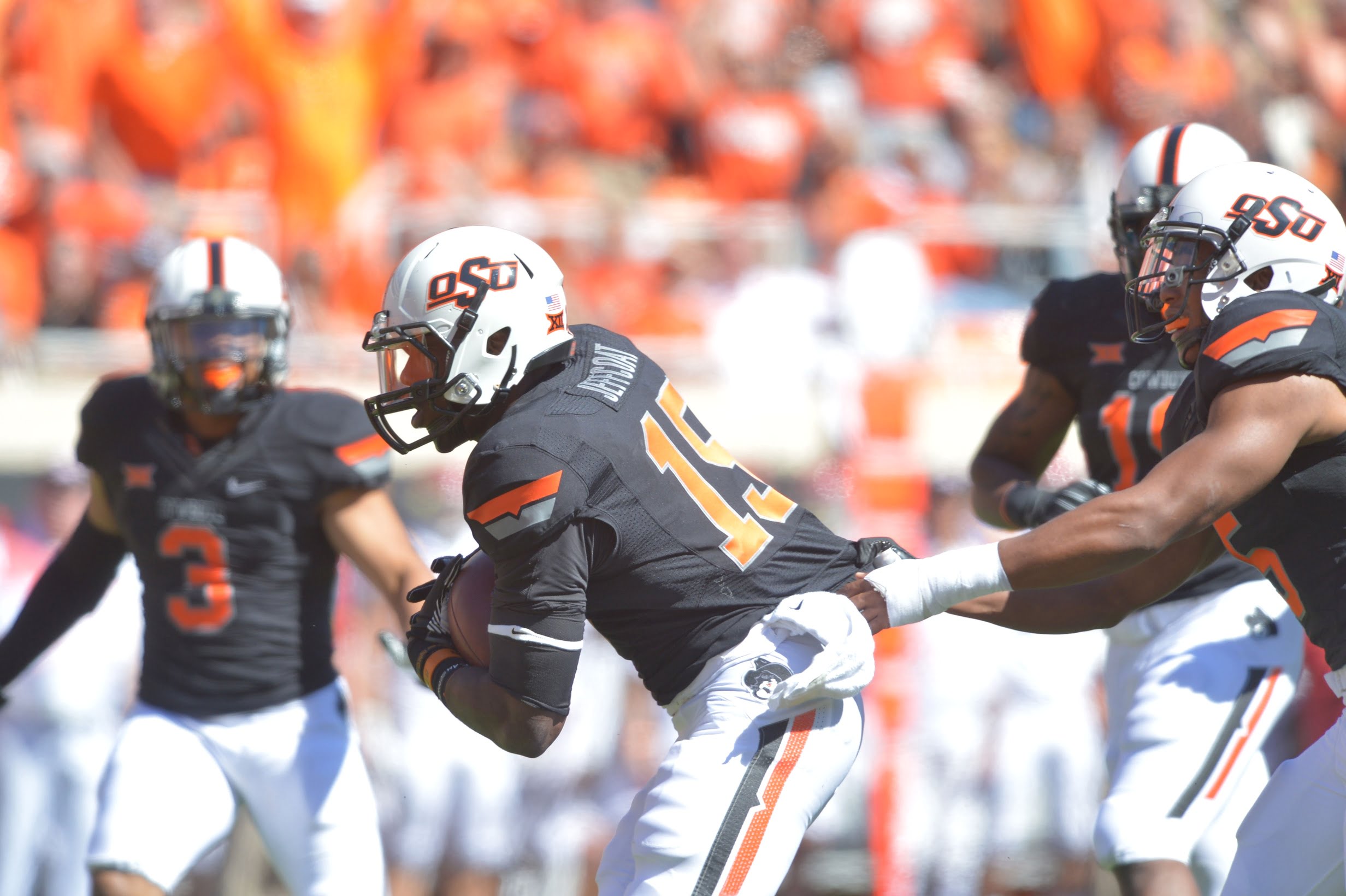 You all know the characters by now. Carson Cunningham, Justin Southwell, and I do a uniform roundtable discussion every Tuesday to discuss the week that was in OSU unis and college football in general.

Let’s get to this week’s chat.

Porter: I have Saturday’s unis ranked No. 3 on my all-time list (since 2011) but I might need to move them up. They’re perfection.

What did you guys think?

Carson: They are really good — top five good. I have wouldn’t have them at three, but they’re definitely up there. I was sitting with Berry Tramel in the TCU press box and he thought Iowa State (!!!) won the uni matchup.

Just goes to show you how subjective this stuff really is.

Anyway, it seems OSU has figured out their best combos and rolled with them. B-O-B, All Black Everything, now W-B-W.

I’m all for variety (I’m still begging to see B-G-B), but if they trot out the best looks it’s hard to complain. Only two home games left and they are running out of retreads. Hopefully they experiment down the stretch.

Southwell: I love them. Probably my No. 4 overall. I don’t think Kyle gives B-B-O the credit it deserves. I think this is the combo most non-OSU fans like because there isn’t much orange.

To be fair, that actually isn’t the craziest thing I’ve heard about the combo.

For an away game against LSU is literally the only time we would see this combo (because LSU usually wears white at home). I don’t see how anyone could dislike this combo after what we did to Baylor in them.

With Homecoming and Senior Night left, I don’t see them wearing B-G-B this year. It will be interesting to see all of the away combos, especially any new ones with Chrome Pete.

Porter: Chrome Pete is nice — I loved these against Baylor and love the more now. Also, I don’t know what you guys expected from someone (Berry) who has another human auto-run his Twitter feed — his preference for USC-lite over one of the three best combos OSU is tossing out there is to be embraced, just Berry doing Berry.

I was also thinking this while drooling over those alternate helmets — is there any scenario in which a stripe down the middle of a helmet doesn’t make it twice as cool? 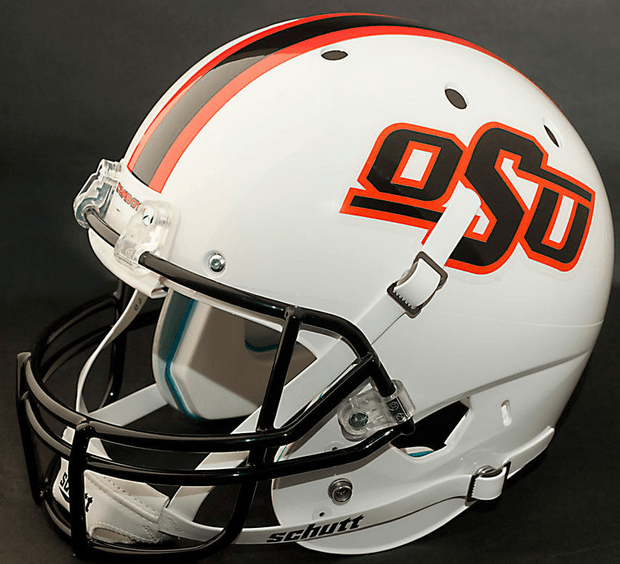 I tried it on Sunday with NFL teams? Arizona? Yes. Dallas? Yep. Green Bay? Oh my. And at the college level I think it’s even more significant.

Carson: The stripe is tremendous. It’s subtle, too. I hadn’t really thought about it on an OSU helmet until these debuted. Where would the Browns be without their stripe? 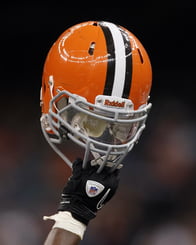 They would be a Chris’ University Spirit sticker away from these: 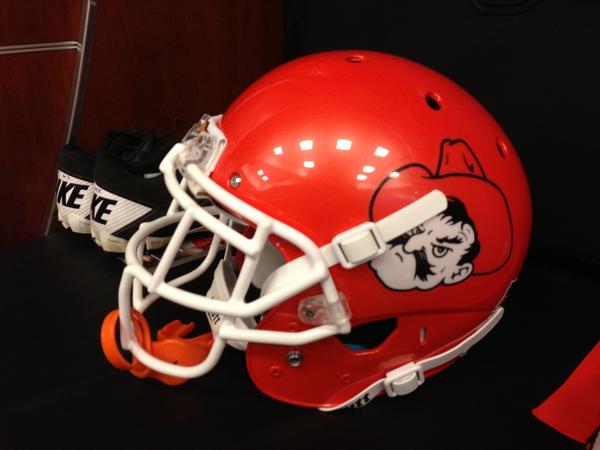 I was half-hoping OSU would trot out in this combo: 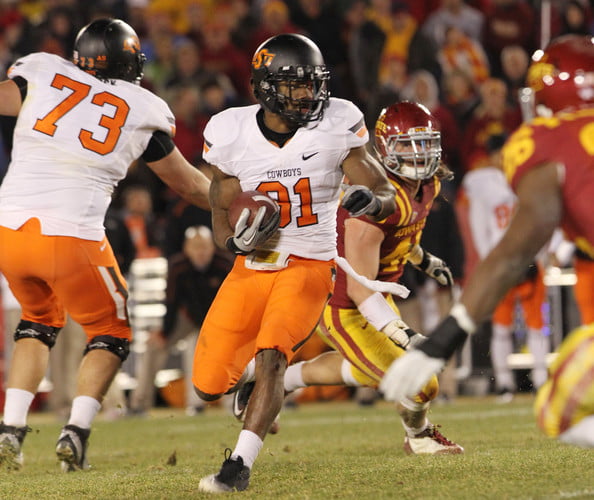 I don’t care if you’re at home. Get the 2011 stink off of them, exorcise the Iowa State demons.

But most fans, sadly, wish OSU would burn them. Actually, can you imagine the stadium’s reaction to B-O-W during the 0-0 stretch of the first half?

Southwell: I think it looks good on a white helmet, but let’s not get carried away. A stripe would essentially ruin a perfect matte black helmet.

I want to see B-W-O again. It’s awesome. Kansas isn’t a threat; don’t be afraid to wear B-W-O against the Jayhawks. Wouldn’t this be a great time to end the tri-color curse?

Porter: What other unis were you guys impressed by this weekend? I thought Arizona State brought it pretty hard against ‘SC (can you imagine Phil Mickelson in one of these?!) 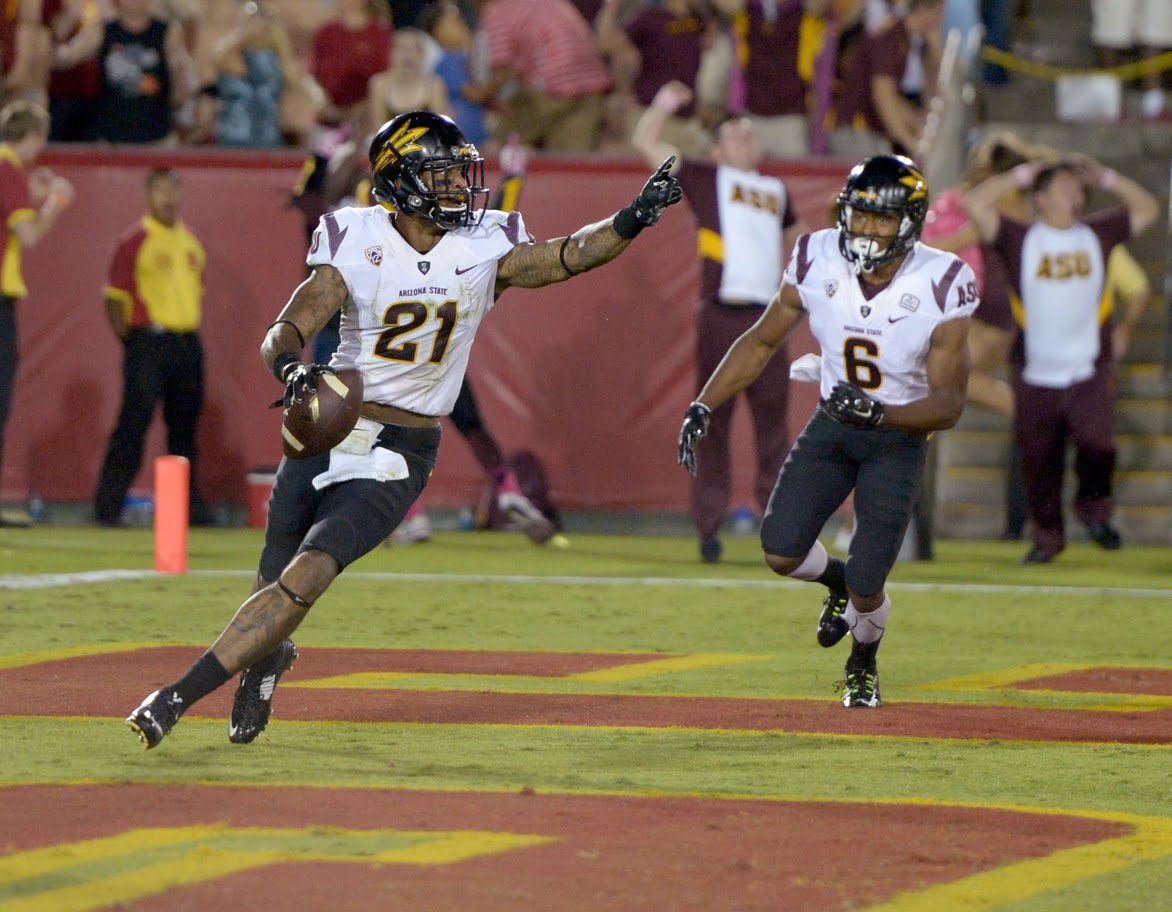 Also, random question but what’s your favorite auxiliary piece of equipment? Mine’s either the old-school chinstrap Brady rocks or the flappy back pad thing that Warrick Dunn perfected in the 90s.

Southwell: Arizona State doesn’t get enough credit because they’re in the PAC-12 with Oregon, but I really like what they’ve been doing with their combos. Pretty solid pick for this weekend. 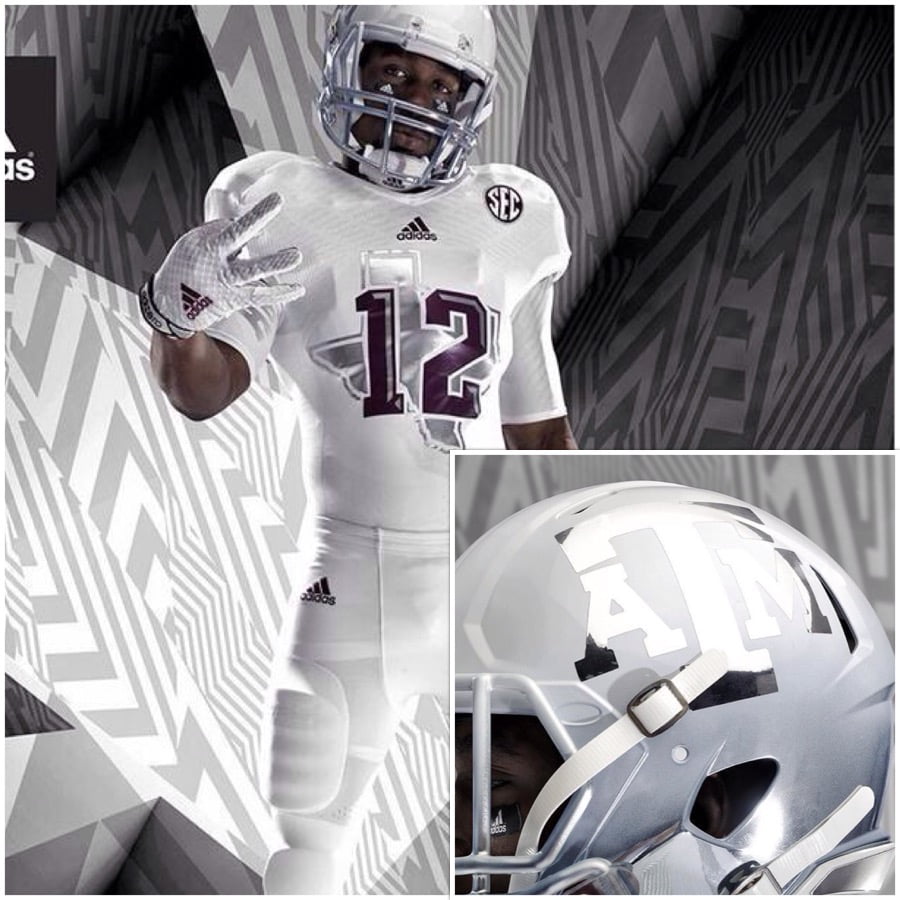 However, due to the lack of new looks, and with the exclusion of my Oklahoma State bias, Texas A&M gets the Team Uni Heisman this week. Savor this rare moment, Adidas.

My initial reaction when I saw these:

I’m not even a fan of the uniforms (they could do without the giant chrome Texas), but I really like the helmet and the stripes on the jersey. Basically what I’m saying is that their helmet looked better than everyone else’s uniforms. So icy.

Syracuse has also impressed me with their orange helmet this year. I like these a lot more than their two-toned faded helmets from last season. 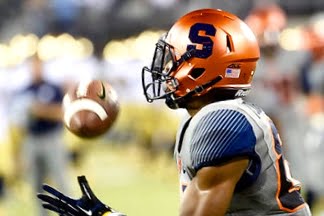 As for auxiliaries, it would be easy to say, “Gloves!” and leave it at that. As a receiver, I love gloves. They’re the best. But I’ll go a step further. I really like what guys have been doing with the QB Wristband. 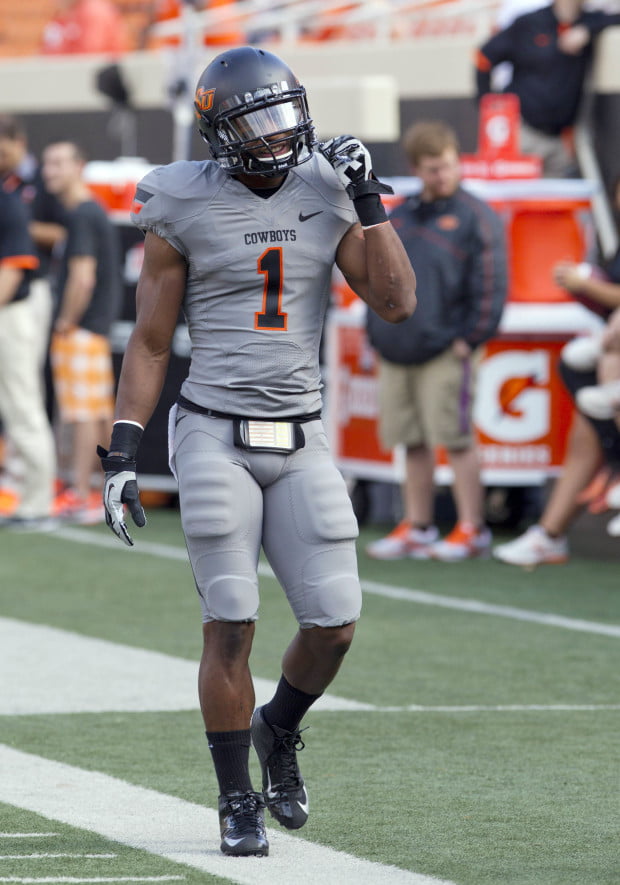 Stick it on the belt loop and you don’t have that awkward tan line on your arm after months of practice.

Carson: Ehh, Arizona State’s are just OK. What was this? 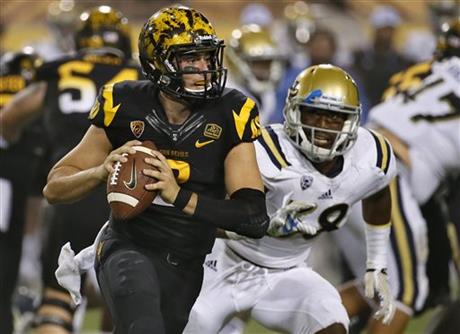 I also don’t like it when teams irrationally wear black when it’s not a school color. That’s high school stuff. But the pitch fork is an improvement, for sure.

The A&M “Iced Out” campaign was pretty cool, I must admit. The helmet was clean. You couldn’t really see anything on TV (until close ups) but it definitely got my attention. A rare high point for Adidas.

Can we talk about that wacky background? Is this a thing? The #Swagcopter tells me it is. (Like #IcedOut, I like Adidas’ slogans/hashtags more than their practice) 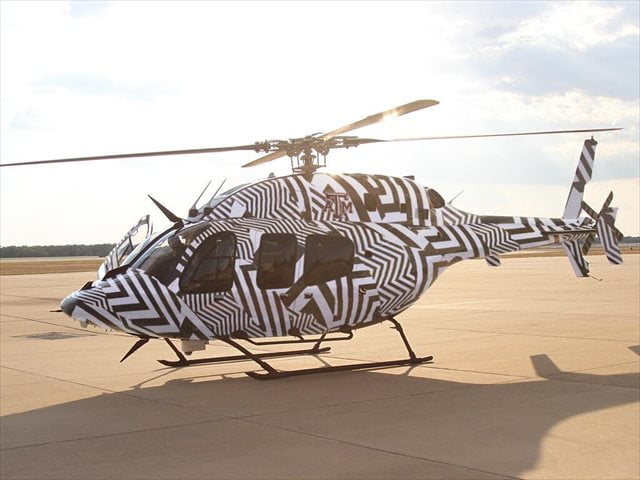 As for the auxiliary, you know my love for FSU: Warrick Dunn’s back flap was a thing of beauty. But they also had linebackers sporting my favorite items left and right: The neck protector, single digits, the visor (preferably dark)…. 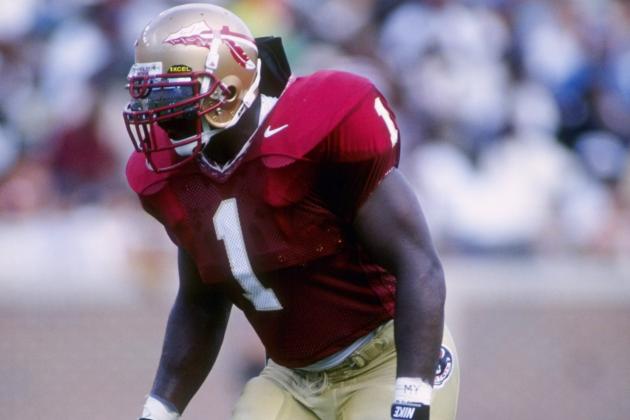 And the midriff jerseys. Which are making a bit of a comeback. 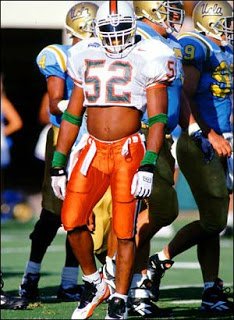 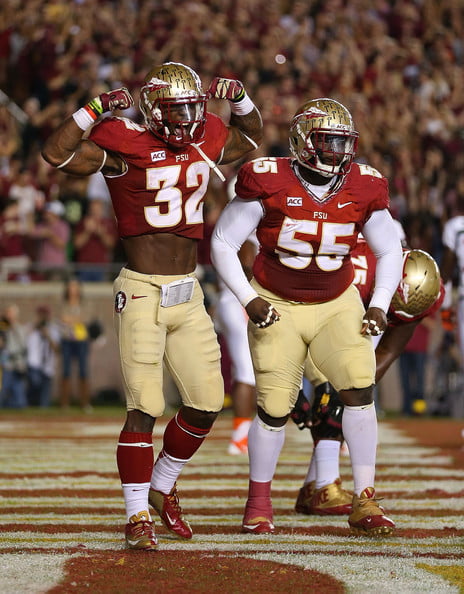 Porter: I will never understand the two-tone helmets. Maybe I’m scarred from the OSU basketball lanes of the mid 2000s but this is just the silliest: 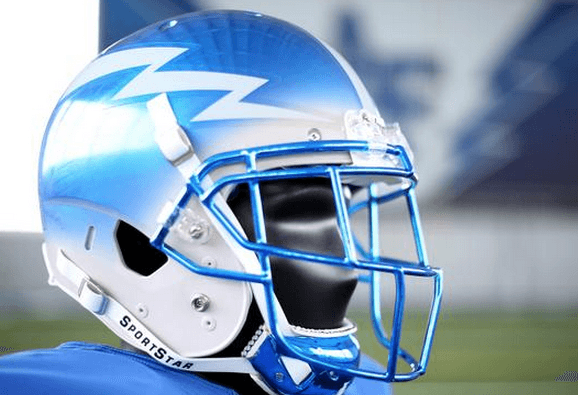 By the way, I got scared about the road I was leading Carson down with the Warrick Dunn back flap. Speaking of, and we need to end this, I wonder if any school has ever had two guys with the same name (one first and one last) within the same decade have the impact Warrick Dunn and Peter Warrick had.

It would be like if OSU got a quarterback named Blackmon Smith or Brett Dez and he won the Heisman.

Carson: It’s a long, winding path Kyle. Glad we veered back. I actually didn’t mind Air Force’s, that logo is so awesome. It’s not like the Jaguars helmet mullet: Business in front, party in the back. 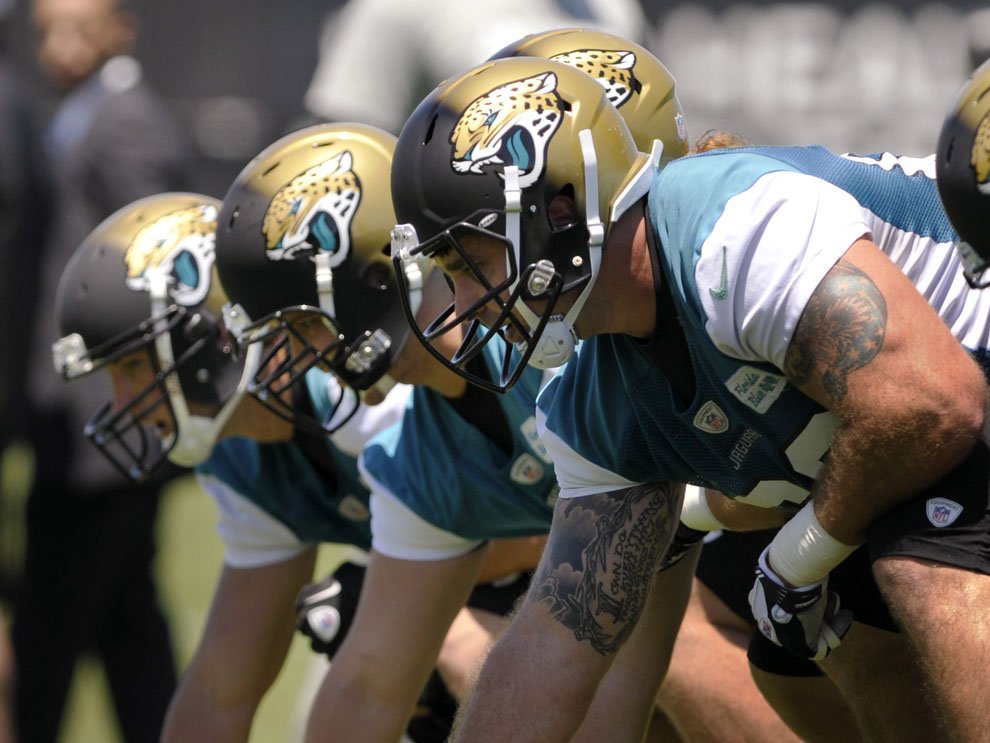 Cooper Weeden may be the QB in 2034, with Josh Cooper as WRs coach and Brandon as head coach. Would that count? What if he had named his son Dez?