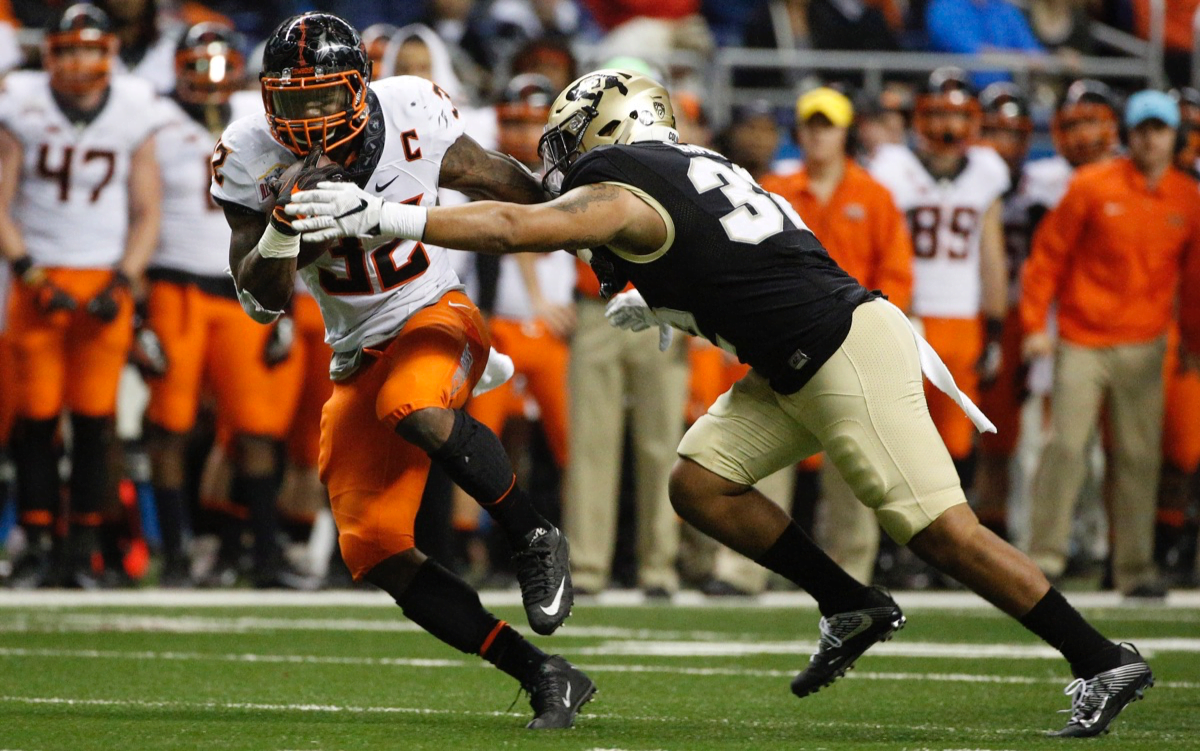 What a year! The Cowboys finished with an Alamo victory over a top 10 team, and the uniforms were a consistent talking point amongst fans all season long. I reviewed the Alamo Bowl threads using the following criteria.

Four of the five categories are on a scale of 1-5. The helmet has its own rating. Aesthetics are a rating of the flow of the uniform as a whole. The intimidation factor is simply how intimidating the uniform looks. The accessories consist of a rating of the gloves, socks, shoes, and sleeves. Additionally, the Cowboys get a point for winning. A perfect score is 21 points for the GOAT. Let’s see how the Cowboys fared.

Oklahoma State sported the barbed wire helmet for the third time in the last four games. I still have this helmet rated at 3 because it’s so polarizing. I’ve seen more negative comments as of late, but that could be due to the negativity from the Bedlam loss or due to the silent majority continuing to keep quiet about their support of this helmet. The Cowboys have better helmets than this either way.

I really like that they brought back the orange facemask for the bowl game because it matched up well with the orange pants.

2016 was the Year of the Tri-Color for the Cowboys. That’s probably not too accurate of a statement if they only wore tri-color combos for 30% of their games, but it is a higher percentage than previous seasons over the past six years. While this wasn’t my favorite tri-color combo of the year, it deserves a high mark.

Over this season, the intimidation category evolved into how the Pokes looked on the field as opposed to how intimidating the combo would look like on a mannequin. The defense dominated Colorado in the Alamo Bowl with their physicality. Consider it intimidating enough for Cowboys fans.

What stood out to me the most were the players with orange half-sleeves. It looked sharp with the combo as a whole. Shout out to Ramon Richards for wearing the homecoming socks even though the black and orange socks looked best with this combo.

Talk about finishing strong! These guys have me fired up for next season. What was your favorite combo of 2016?