The rumors started flying pell mell at some point late last week[1. It could have been longer ago, the pages of Orange Power are where searches go to die.] and only picked up steam until we arrived at what happened tonight.

Cowboys Ride For Free, an OSU blog[2. And a pretty good one at that.] at SB Nation posted that the camo uniforms were real and were going to be worn this Saturday against Texas (on national television no less).

This is the photo that was cited… 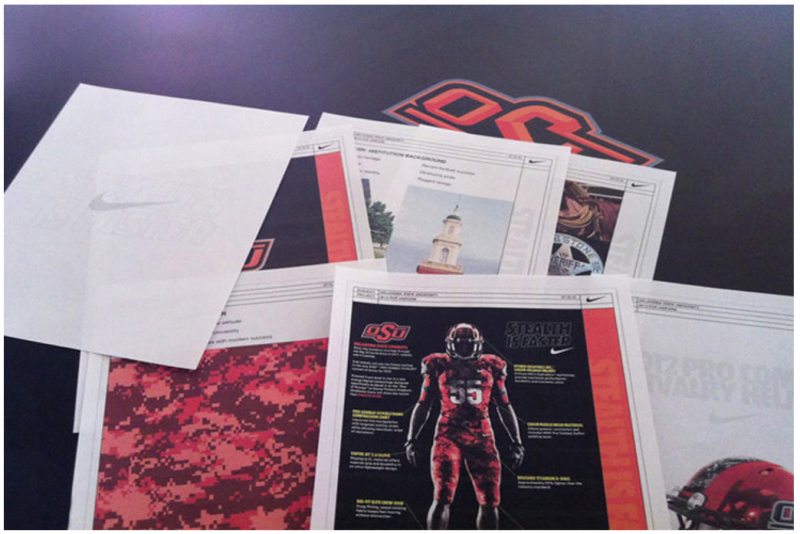 I checked around a little bit and have come to believe that these photos/drawings/prototypes are real and were (WERE) proposed by Nike to the OSU athletic department (and Gundy) at some point (I believe last season).

I’ve also been led to believe that they were shot down and never saw the light of day in terms of production. They were a brainstorm, an idea that never evolved into anything more.

I’m not sure why everything is coming to a head this week before the Texas game, or why CRFF is so convinced that we are wearing them, or why the Dallas Morning News(!) and Fox 25 in OKC are chasing the CRFF report.

@pistolsguy so fox 25 in okc says were debuting camp unis against Texas. I'm going to vomit all over my flannel shirt if this is true.

It’s not true though, these will not be worn this weekend. Carson Cunningham echos this sentiment…

Very credible source says the camo uni's aren't real. Nike drew them up, but OSU never went through with them. #okstate

I’m pretty relieved this isn’t a real thing to tell you the truth. Those mock-ups look Nike executives lost a bet with Wal-Mart executives and the wager was that Wal-Mart got to design one college football uniform of their choice.

Should have chose OU, Scooter and Jack would have jumped all over the chance to FINALLY get a top to match all their hats and pants.

How SWEET are those new OSU camo unis gonna be?? I still say they should have unveiled them at the start of dove season but MY GOODNESS.