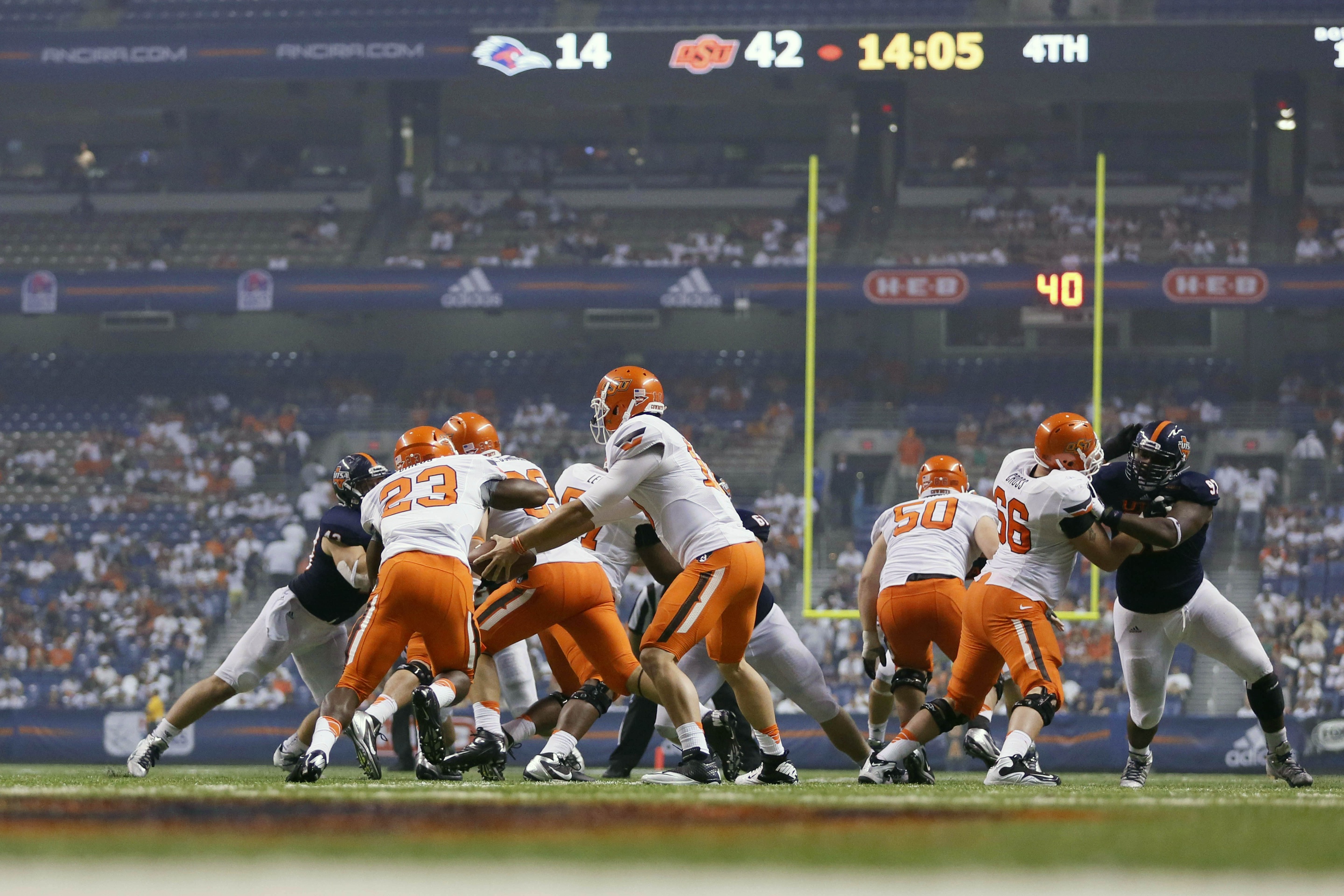 Winners: JW Walsh, JW Walsh’s future sports agent, Jason Ray (WRs coach), UTSA’s fanbase, Jhajuan Seales, Texas flag makers (did you see the size of the one UTSA ran out with??), Vine (it’s getting a lot of my business lately), the creators of QBR,[1. OKC Dave and I need to just make up a stat and promote the crap out of it, just for fun.]

Losers: Big 12 Ds (what now?), Chelf’s PT (all doubt removed), second-string D (yikes), Fox Sports 1’s announcing crew (this was the national game!), Brady Poppinga (on-field guy, I thought he was going to climb through my TV!), Mississippi St. (UTSA could roll with them).

Best play: I loved the Shaun Lewis pick. Do you think Shaun Lewis made a deal with himself that the only time he would make interceptions in college would be on tipped balls? Here’s a look:

Best player: Walsh is the obvious answer (and he was spectacular) but I loved how Kevin Peterson played. He said the other day he wanted to be more like Justin Gilbert but maybe the opposite should be true.

Worst thing said by an announcer:[1. This was like trying to decide which 1988 Barry Sanders game was supreme. So many options!] I was so excited to see the Riverwalk!

Uni Heisman: Shaun Lewis — I love the black cleats (so old school) and I love the towel hanging out the back of his uniform (so Hart Lee Dykes). He really should get this award more often even if I have to make it a sliding scale because of Justin Gilbert.

Thing that’s not a thing but should be: When UTSA lines up without a QB it should be called “the Wildroadrunner.”

Quote of the game: UTSA safety — They are completely different from any other team we have played. They were amazing. (NewsOK).

Thing that made me say “wow”: The fog in the Alamodome after halftime. It honestly looked like they were trying to smoke somebody out of the place. It made San Francisco look like the Bahamas by comparison.

Thing that made me laugh: Imagining what these two were discussing…

Other stat of the game: Against Mississippi State OSU had zero receivers gain 40 yards, seven did it against UTSA.

Photo of the game: I haven’t seen one that tops this one.

GIF of the game: This one made me laugh the most (watch Bobby Reid at the end)…