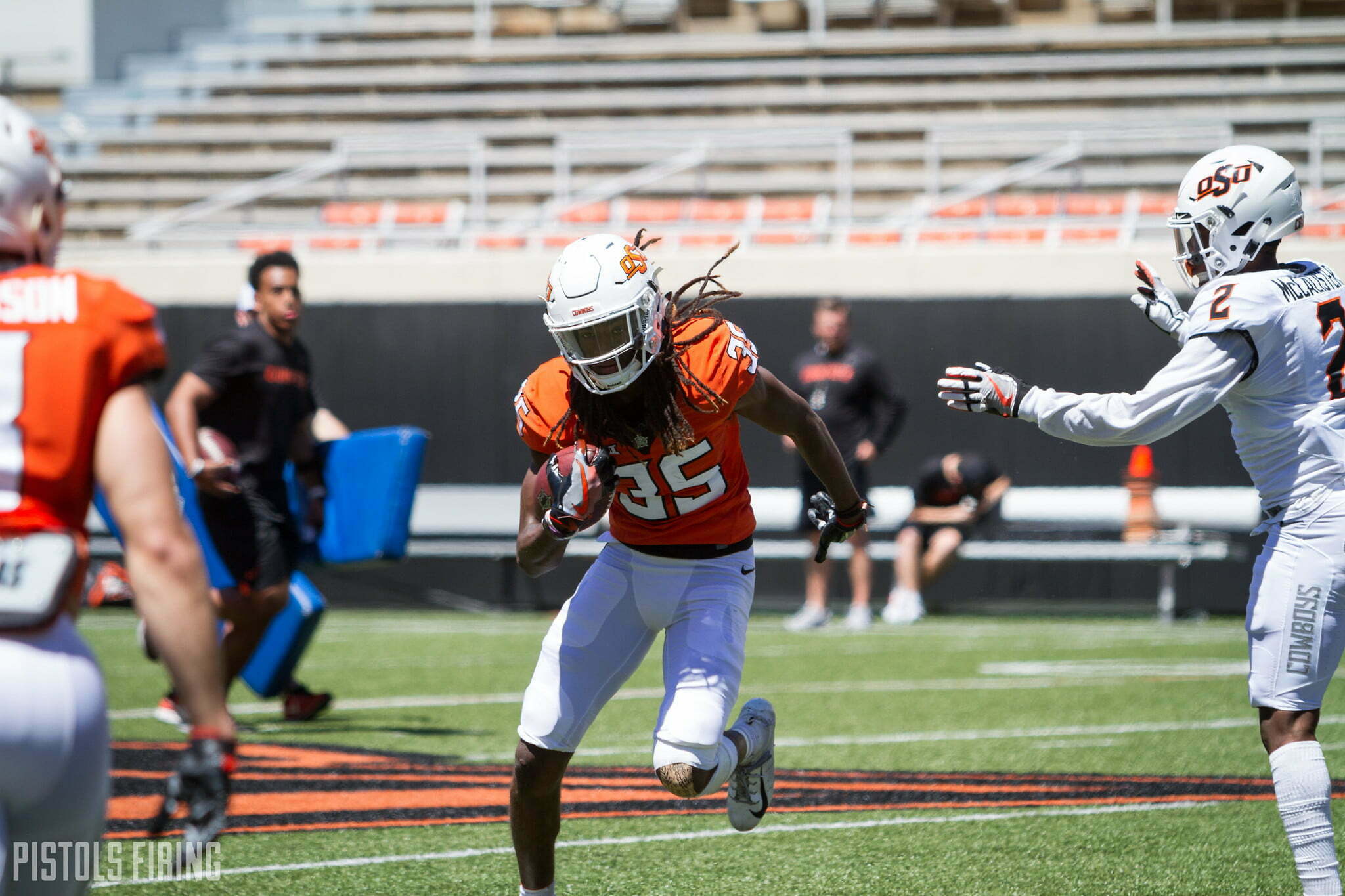 After C.J. Moore did his Herman Moore impression at the spring cotillion last Saturday, Mike Gundy was asked about how he felt about his KD-lookalike draped in No. 35 running wild in his debut on the Boone Pickens turf.

“He has had a good spring,” Gundy said. “He didn’t do much last year. I said this earlier, C.J. has changed completely. I think he has gained 30 pounds and his body has changed. He is learning how to handle it and body control, and all of the things that all of our wideouts have had to do to be successful.”

Yes, yes I would say that he is.

#OKState WR C.J. Moore (@daddydimes35) had a huge showing in the final practice of OSU's spring ball. Caught everything thrown his way. pic.twitter.com/oR0UKsuvhB

So he becomes a real threat behind Tylan Wallace (who I have somehow forgotten about) and Dillon Stoner, right? Well, maybe, but Gundy said Moore is actually going to be a little bit limited when it comes to playing time.

“He is learning, and is going to need another year before you can say we are going to leave you in for 55 to 60 plays per game and play at a high level,” said Gundy. “I don’t know if he will be ready for that, but he should be able to have a number of good plays for us early in the season.”

The Cowboys ran just over 77 snaps per game offensively last season, which is about in line with most years of the modern Gundy era (post-Dana Holgorsen hire in 2010). But it begs the question of what’s a normal number of plays for a stud receiver (especially one in an up-tempo system like OSU’s). Gundy is insinuating that 55-60 (or 70-80 percent for Oklahoma State) is a lot, but how does that stack up to past Pokes teams and even around the country? Basically I want to see how much C.J. Moore is going to be in my life four months from now.

We don’t have data on snap counts generally in college football, and we have never kept counts for Oklahoma State. But we can turn to a different OSU to take a gander. The good homies over at Eleven Warriors do keep snap counts, and I pulled their numbers for their top three receivers for the last three games of last season (Michigan, B10 title and Rose Bowl).

So those numbers are interesting. In their final three games, WR2 and WR3 only played more than 60 percent of snaps one time between the two of them. For these Pokes you can probably mostly slot Tylan into WR1 and then put Stoner and Landon Wolf in WR2 or WR3 in some order. Which leaves us with …

That’s probably (?) a pretty good representation of how often we’ll see three-five next season as long as he maintains his health and performs to the level that it seems like he’s going to perform based on the spring he just had. Those numbers would represent around 40 plays a game for Moore.

I have no firm opinion on this one way or the other. I just thought it was interesting to hear Gundy talk about Moore playing fewer than 55 offensive plays because it didn’t seem like that many. But when you note that 55 plays is over 70 percent of what Oklahoma State runs on offense and start to look around at how often receivers in similar offenses are out there, it makes more sense.

Regardless, I’m ready for as much C.J. Moore as Gundy will give me as the newest top flight pitch-and-catch duo begins to emerge from Stillwater, Oklahoma.