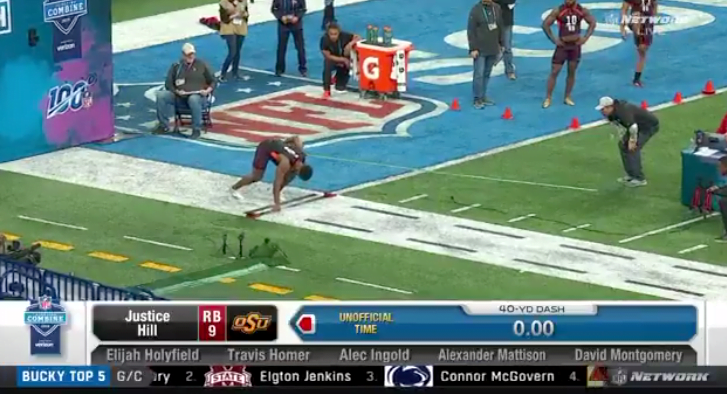 Oklahoma State’s leading rusher put the NFL on notice when he was clocked at 4.40 seconds in the 40-yard dash at the NFL Draft Combine on Friday.

Justice Hill ran a 4.4 flat in his first 40-yard dash at the NFL combine. pic.twitter.com/3uHSjYGXVv

On his second run, Justice came in at a 4.49 unofficially, but luckily they take your best run. Unluckily: He may have tweaked something in his second run. He came up gimpy at the end and didn’t appear to be participating in drills after the 40.

But before the on-field drills, Justice did plenty to impress. His vertical jump of 40 inches was the highest among running backs, as was his broad jump.

That 4.40 was probably the magic number for Justice to really move up draft boards, but it should come as no surprise. Last summer, in a highly publicized foot race, Justice lined up next to his younger brother Dax Hill and came out on top. That’s the same Dax Hill that just months early was electronically clocked at 4.3 at Nike’s The Opening. The fastest running back in combine history was Chris Johnson who ran a 4.24 in 2008.