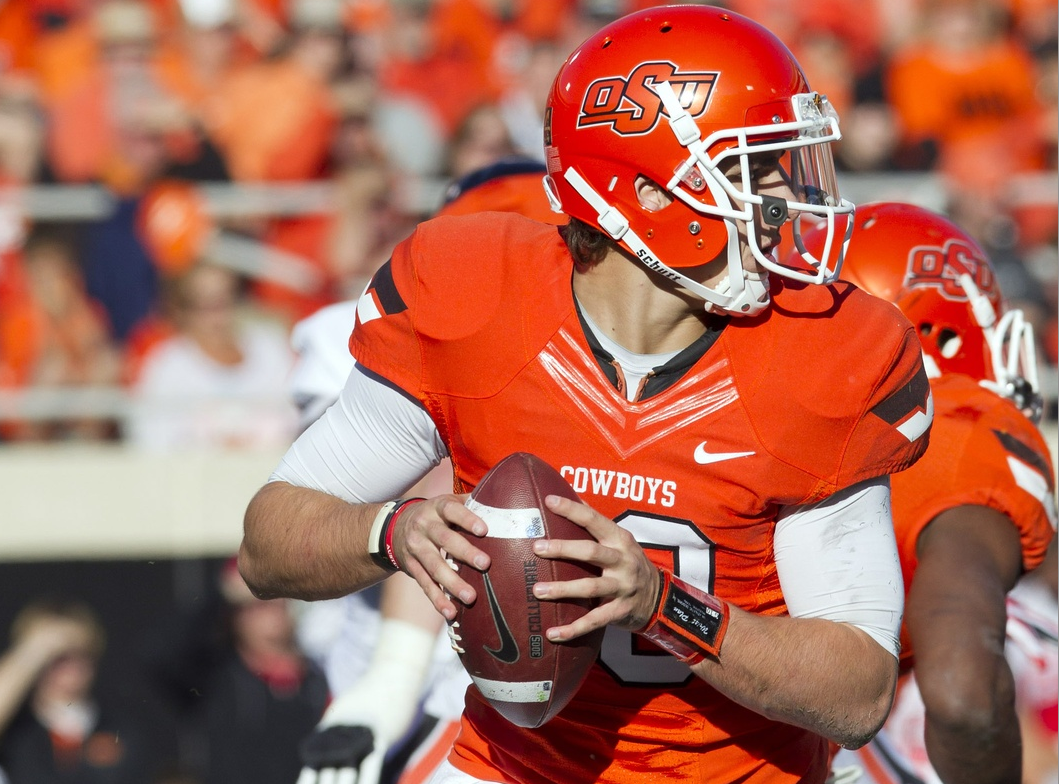 Mike Gundy named Clint Chelf and JW Walsh co-starting quarterbacks on Thursday afternoon, or at least that’s what I think he did.

His exact words were:

“I don’t feel like either one of them will be a backup in the first game.”

I’m not totally sure if Gundy knows how this whole foosball thing works but yes, one of those guys will, in fact, not be on the field when the first snap is taken from under center and therefore, by definition, be the backup.[1. Unless we pull a “why is Zac Robinson lining up in the slot with Bobby Reid under center?!” situation which, at this point, isn’t even close to being out of the question.]

The thing that worries me though is what Gundy said after that:

“I don’t like two-quarterback systems if we have one that’s better than the other or one that’s more experienced. Each year is different. Now we have two quarterbacks who are right there with the same amount of experience. We’re obligated to give both of them an opportunity to play in the game.”

When you get paid $3.5 million dollars to tell 85 people what to do with a football, you have no obligations other than piling up Ws. Heck, I mean, flip a coin if you want. I don’t care!

The last thing Gundy said was basically an open lamentation about the fact that Brandon Weeden was purged of all his eligibility and it was a bit foreboding:

“There’s no perfect (answer). It’s an issue. I think everybody would say you’d rather have an NFL quarterback and play one. That makes it a lot easier for everybody. If there’s two guys that both deserve to play, you gotta play them. That’s really the only way to handle it.”

Wait, it’s an “issue”? How is it an issue? You’re the one who’s getting paid hundreds of thousands of dollars per issue solved!

And no, if there are two guys who deserve to play, you don’t “gotta play them” — this isn’t the Little League World Series[1. Though JW Walsh’s arm might trick you into thinking it is — I promise I’ll stop at some point, I really do like the guy.]

I loathe two-QB systems more than I loathe the memories of Nathan Simmons running HB Dive over and over again in my head.

You guys know I’m #TeamChelf in this whole mess but the truth is I would rather Gundy just start Walsh straight up than try to figure out how to play both of them. Plus, my disdain for Walsh is a bit overblown. The dude is legit. If you put a gun to Bob Stoops’ head (which I think somebody tried earlier this year) he would take Walsh over Knight and Bell in a heartbeat.

A lot of people have noted “hey, it’ll be OK, both guys are really good!” But the history of two-QB systems working in college is pretty short. Like, “2007 Florida and that’s pretty much it” short.

The issues are multifold and chief among them is not necessarily who your starter is, but the question of “who’s your closer?” I want to know who we’re rolling out with 90 seconds left against West Virginia in Morgantown on a Saturday night when OSU is down six. I want to know right now, too. And I want everybody else to know as well.

From the way Gundy’s talking he’s going to use Walsh beyond “hey, it’s 4th and 1 and we need some yards” or in goal line situations. This begs a number of other questions that I’m sure people who get paid more than me (a lot more than me) have discussed but have yet to implement. Questions like:

Who, you know, decides which guy is going out there on every series?

Does Yurcich have to juggle calling plays in the Big 12 with trying to satiate each of his signal callers?

Why, when ever singe player in the preseason insinuated it was going to be Chelf, is Gundy so hell bent on playing Walsh? Is he worried about the next two years? If so, has he seen this clip?

I honestly don’t care who it is but it needs to be somebody and right now it’s not.

And it doesn’t sound like that’s getting resolved anytime soon.