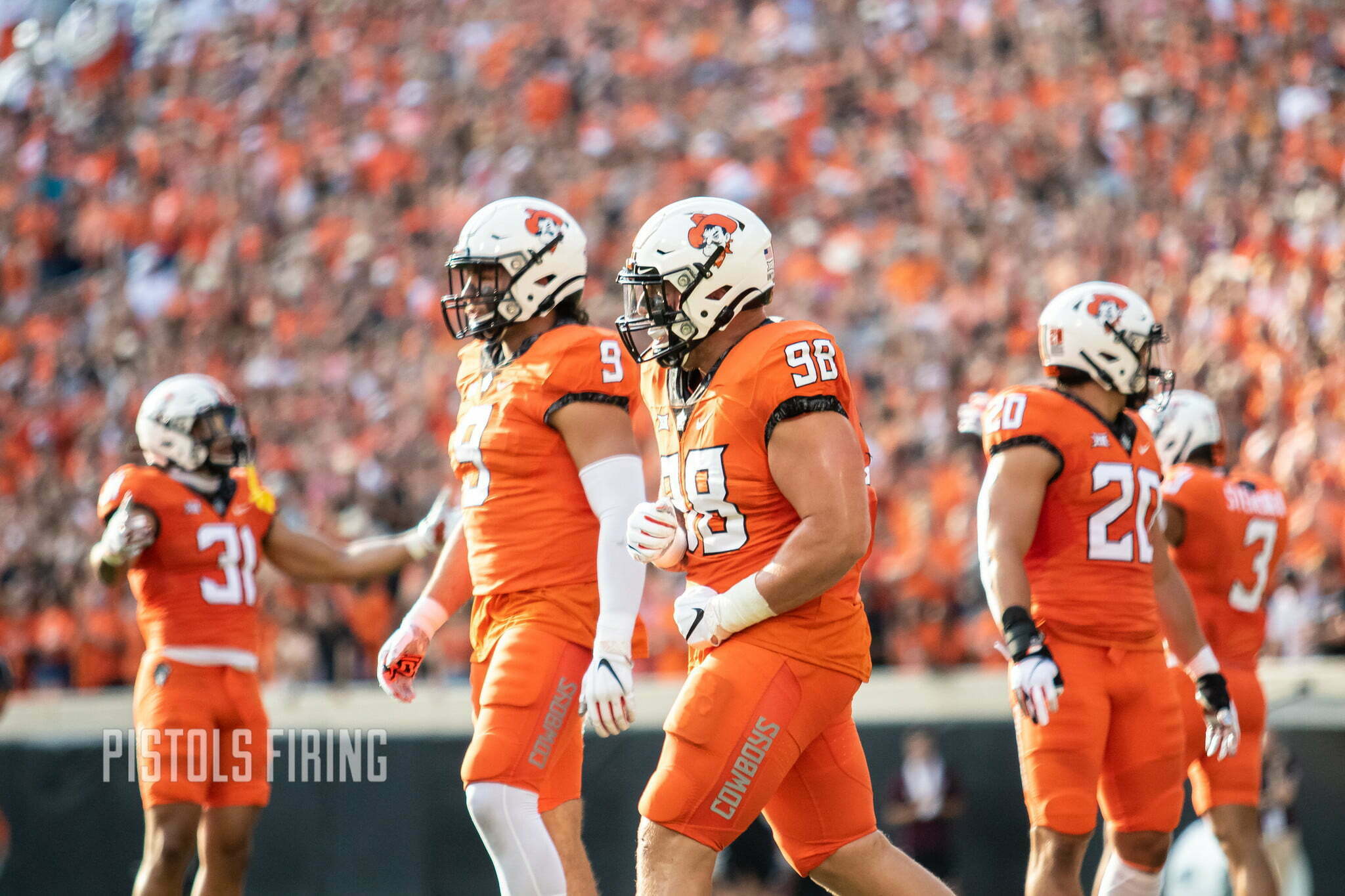 Oklahoma State opened its season with a win on Saturday night, defeating Missouri State 23-16. And yes, it was as ugly as it sounds.

The Cowboys were favored by nearly 40 points yet had to come up with big defensive stops late in the game to thwart a driving Bears team that was poised to potentially send the game to OT.

OSU will get a passing grade in our Week 1 report card overall — a win is a win, after all — but not everone scored high marks. Let’s get to my grades.

For as lackluster as OSU’s offense was — and we’ll get to that in a second — the defense was sensational. OSU gave up only three points in the first half and did not allow a touchdown until 3:06 left in the game.

The defense fittingly was responsible for delivering the final dagger, too, with sacks on third and fourth down late in the fourth quarter effectively sealing the game and allowing the OSU offense to kneel and bleed out the clock.

“The defense obviously did a great job,” said Mike Gundy on Saturday. “We put them in a terrible situation multiple times. They faced 83 plays, which is a lot, so they really stood tall and made a bunch of plays. I was very proud of them.”

Making just his third career start for OSU, sophomore QB Shane Illingworth got the win and put up big numbers in the process. He finished 22-of-40 passing for 315 yards, one touchdown and one pick. It was something of a mixed bag. Made some impressive throws, made some not-so-impressive decisions. About what you’d expect. Didn’t go out and win the game for OSU, but certainly wasn’t a weak link, either.

“I thought he played pretty good,” Gundy said. “Where he’s at with his experience, I think he played fine.”

Illingworth opened the game 5-of-6 passing (the one incompletion being a drop) and finished the opening drive with a TD lob to Tay Martin. It was a tone-setter. Even though he didn’t maintain that efficiency throughout, he still had some bright spots. In particular, a play in the fourth quarter while OSU was in the red zone stood out to me. Illingworth made several progressions on a pass play before firing across the middle to Bryson Green in the back of the end zone. Green was out of bounds, but the poise he showed standing in the pocket, going through his reads and firing a dart was encouraging.

OSU ran the ball 28 times Saturday night for 54 yards. The longest rushing play of the night was 13 yards … by receiver Braydon Johnson. Only once all night did an OSU running back break off a play longer than 10 yards.

“We just weren’t very successful rushing the ball,” Gundy said summing up the struggles. “We pass-blocked pretty good today, but we couldn’t block very well [in the running game].”

Not being able to run the football might be expected against, say, Texas or OU. But not being able to generate any push against Missouri State is troubling. It was problematic as OSU tried to close the game, too, with one late-game sequence in particular — when OSU had incomplete passes on second and third down and gave the ball back to Missouri State with time left — proving the importance of a reliable running game. Maybe the way Missouri State played OSU with its inexperienced quarterback is a one-off that isn’t indicative of how OSU will run the ball this year, but the running game gets an F in this one.

OSU missed an extra point and early kickoffs weren’t up to what Mike Gundy was expecting, but, dare I say, special teams were …. pretty good? Gundy’s postgame assessment was that OSU punted and tackled well and he seemed pleased with the return game. Ditto. Brennan Presley is a difference-maker. He had one kick return for 36 yards that he nearly housed and three punt returns — including one that went for 12 yards — for a total of 15 yards. It’s been awhile since OSU has had a true threat in the return game but Presley seems to be what the doctor ordered.

Stepping into a big role in OSU’s receiver room, Tay Martin seized the opportunity as a starter on Saturday by bringing down six catches for 107 yards and a score — all team-highs. And he did that despite tweaking his ankle early. His size and explosiveness changes the dynamic of what OSU’s offense can be this season and he looked the part of a true No. 1.

This Malcolm Rodriguez play: A+

There were a ton of impressive highlights to come from this game but this one in particular from Malcolm Rodriguez — as he pulled off a hip toss mid-game on an offensive lineman — is the one I’ve found myself watching over, and over, and over again … Look at the grown man strength!