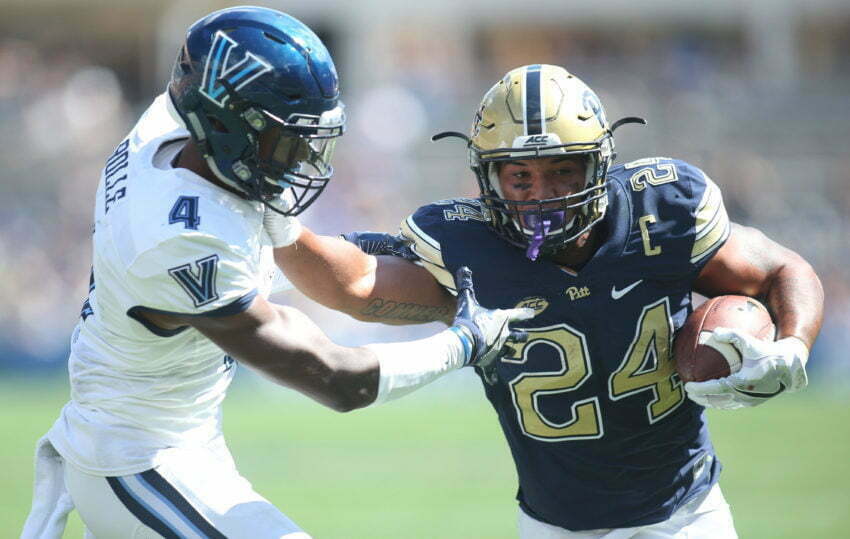 This Saturday, Oklahoma State will be playing against one of college football’s most inspiring players. James Conner, Pitt’s junior running back, starts for the Panthers just nine months after being diagnosed with Hodgkins Lymphoma.

Conner came into the 2015 season with big expectations. Many thought the reigning ACC Player of the Year and 2014 first-team All-American was set for a bright junior season and guaranteed NFL future. But an MCL tear in the Panthers’ season opener against Youngstown State put him out for the season. Then, in December, he received news that put his football career on hold.

“I remember it like it was yesterday,”  Conner told USA Today in a June interview. “There were a whole bunch of doctor’s notes and at the very bottom it said ‘compatible with lymphoma’ and I was like, ‘compatible with lymphoma — does that mean it is?’ and he was like, ‘yes, there’s a great chance that’s what it is.’ I was sad, you know, my mom was crying, but it was just another obstacle you’ve got to overcome.”

The diagnosis didn’t deter Conner, though. He was set on beating cancer and coming back for the 2016 season.

“When I heard those words — ‘You have cancer’ — I admit I was scared,” Conner said in a statement following his diagnosis. “But after thinking about it for a bit, I realized that fear is a choice. I choose not to fear cancer. I choose to fight it and I will win.”

Conner didn’t let cancer keep him from playing football. He still participated in team workouts and activities, even during his six months of treatment.

“These treatments are quite strong,” said Pittsburgh doctor Stanley Marks in a USA Today feature interview. “He received therapy every two weeks with four drugs. The day after, many patients spend in bed or taking it easy. He would go and work out.”

Conner’s ethic was an inspiration for both the football team and the entire university. Panther head coach Pat Narduzzi uploaded this video in February just two months after his diagnosis. Conner later said that it was the first time he did that drill since his knee surgery and chemo treatments.

After months of chemotherapy treatment, he finished his last session in early May and made the big announcement on Twitter just weeks later.

Just three months after being declared cancer-free, Conner scored his first 2016 touchdown in week one. In fact, he scored two touchdowns that day, and he scored two more touchdowns on 146 total yards against Penn State last week. He has since become the face of Pittsburgh football and has already re-established himself as a future NFL prospect.

So if Conner does find his way into the end zone on Saturday, the fans in Boone Pickens Stadium won’t likely cheer or holler, and no one expects them to. But they should acknowledge this player’s story.

Hopefully, the Cowboys won’t let Pitt reach the end zone too many times on Saturday. But if they do, it would be OK if he were the one to do it.