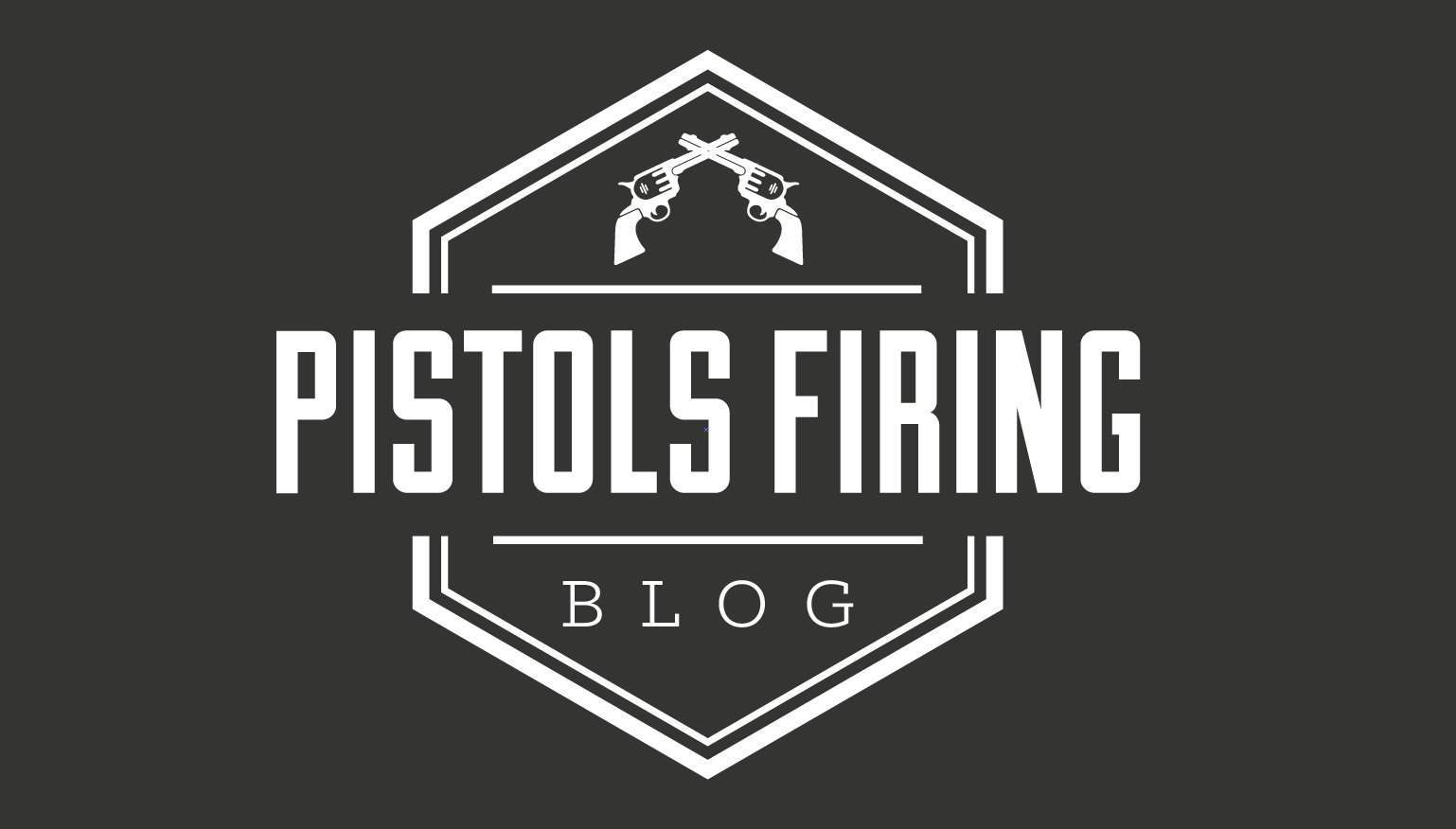 Welcome to a slightly redesigned (but definitely faster) Pistols Firing.

We’ll take a spin around the new site in a minute so you can get a feel for where everything is but first let me apologize for the tweaks taking so long. That’s unacceptable and a result of some pretty poor planning by me.

Sorry for that — I think we should be good to go now.

You’re probably coming here after not being able to log on for three days and saying “it took you 72 hours to do this?”

It’s true, most of it looks the same but we did change servers (which is what took so long) and everything should be Tyreek Hill levels of fast now. Really, I’ve been blazing around for the last few minutes and it’s a much better experience.

Also, as most of you have noticed, PFB has a new logo. Now I know those of you who just bought t-shirts with the old logo are probably like “WTF Pistolsboy, what is the meaning of this?”

Fair point but the way I look at them is that you can call them vintage now, right? As are my cornhole boards.

This upgrade was a long time coming and I finally hired somebody (Michael Lane) to get some solid work done instead of me flailing around in Photoshop like I was Adarius Bowman at Allen Fieldhouse.

Here’s a look at the new design: 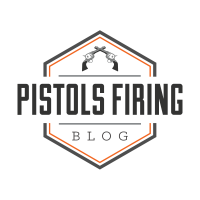 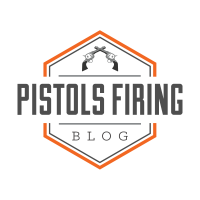 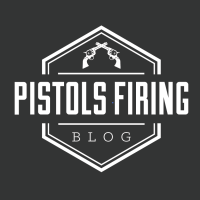 The site is also cleaner — I got rid of all the stuff I thought wasn’t necessary. I want this to be the stream of OSU content you visit daily or weekly. It’s sort of set up like Deadspin in that way. Just a stream of content that entertains and informs.

I’ll highlight some of our bigger pieces with larger photos etc. but I wanted to keep it as simple as possible and let you be able to easily access across a myriad of devices.

Another one of the requests I got in the survey in January was breaking everything into topics so I culled everything down and added a football, basketball, and recruiting tab on the sidebar so if you’re only interested in OSU hoops (???) you can filter everything else out.

You might be asking “recruiting…?” — More on that later this week.

Also, I have shirts. New shirts. Awesome shirts. I’m wearing one of them right now and have been doing so for the last three days. They’re going to be for sale next week and you may or may not find out about them first (and get a discount) if you sign up for the newsletter.

The contributors page is also update as a few have a left and a few are new.

One thing that might be a tad confusing is when you’re on a single page how to navigate back to the home page. You can click on my face or name or the “home” button. Like so: 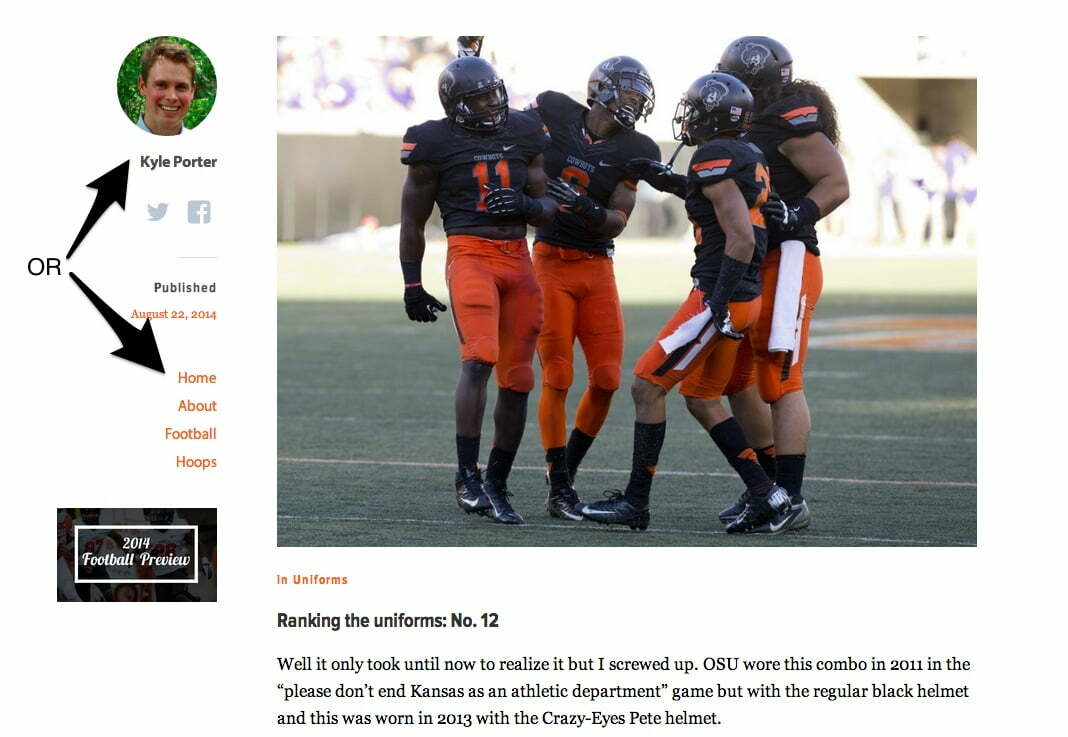 Everything should work faster and more smoothly on your mobile devices, too. Tweets actually show up all the way now, so that’s nice. I also got a new post title font (okay, we’re at the “you definitely don’t care anymore” stage). There will be other minor tweaks over the next week but for now let’s move on.

I am a tinkerer of things — I think most entrepreneurial-minded men probably are — and as such I tinker where I often shouldn’t. Enter the two guys who I owe everything to for this redesign.

First, Michael Lane did all the logos and artwork you see on the Bullets, 10 thoughts, #okstate roundup, and everything else that looks nice. He’ll be doing info graphic work for football games this season which is good for me and great for you guys.

He also may or may not have designed some new products we have coming out fairly soon (okay, he did). If you ever need anything done he’s tremendous on deadlines and I think his graphical immensity speaks for itself. He also runs Resume Launch (which sponsors the #okstate roundup) and for which I am now a contributor.

Second, Sam Snelling coded and customized the new theme. It only looks slightly different but we’re definitely cruising faster than we were (like an upgrade from Perrish Cox to Justin Gilbert on the kick return team) and he’s done great work integrating all of our sponsors seamlessly into the site. This place definitely wouldn’t be what it is without him.

Over the last 12 months 500,000 unique visitors have viewed nearly 5 million pages on this site. That’s an insane number for some little blogger boy who had no idea what this thing was going to be when he started rolling almost four years ago.

I’ve never charged for the site (and likely never will) but I often get asked what the best way to support the site is.  the best way you can support PFB is one of the following:

1. Keep visiting and reading and sharing with your friends. The more visitors and traffic the better for sponsors.

2. Sign up for my newsletter. I’ll keep it fresh and you’ll get some goodies before anybody else does.

4. Buy the products we’ll have coming soon in our store (and if you sign up for the newsletter I’m going to guess you’ll get a first-look discount on some of that stuff).

6. Contribute. Right now we have 5-6 part-time contributors and I’m always looking for more. Kenzie Kepple, who was helping with recruiting, is moving on and his spot will be filled soon but there’s plenty of other stuff to cover.

Think of it this way: If I have people helping with the smaller stuff I can churn out more of the long form pieces (and maybe even a book?) you guys like.

Plus, if you’re a college student it’s a pretty cool opportunity to contribute to a fun blog and a recommendation (if you’re good) from somebody who works for a national sports site (me).

I would have done that in a heartbeat if I was a college students.

All that to say, thank you again for reading and supporting Pistols Firing. I hope you’re pleased with the updates and the speed and I’m glad we’re thru the rough patches.