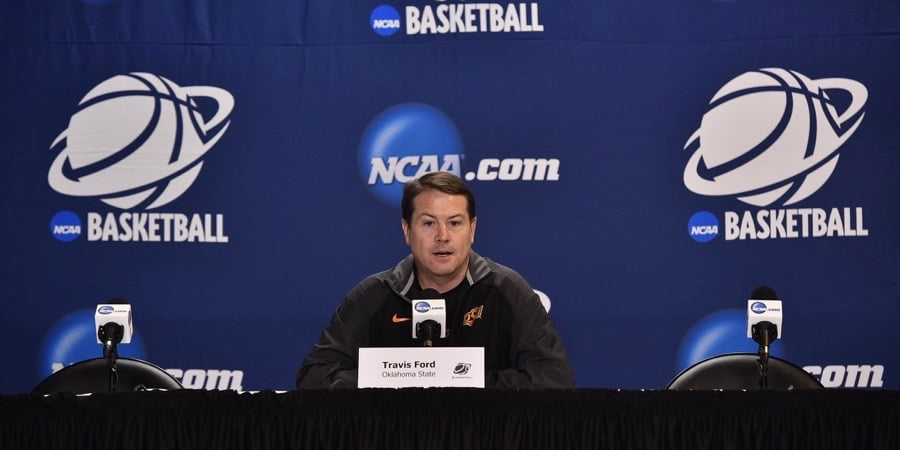 Travis Ford still has his job in Stillwater. (USATSI)

What in the world happened this week?

Nobody knows for sure but the internet isn’t for “not knowing for sure.” It’s for speculating like crazy until you stumble upon the most plausible, fun theory possible and disseminating it to all your friends to see if they agree.

That’s why we’re all here, right?

So what happened with Travis Ford and Boone Pickens and @orangefactor and Mike Holder and Oklahoma State hoops this week?

Well, I have a theory and it goes something like this.

1. Mike Holder and the powers that be in Stillwater started getting antsy after Travis Ford lost his fifth-straight NCAA Tournament game two weeks ago.

They talked to some lawyers and tried to figure out what in the world to do with that albatross of a contract (at this point, it feels wrong to insult albatrosses like that…it’s more of an ostrich of a contract).

2. When they realized not much could be done because of the language of the contract was so damning they answered a few of those emails and phone calls from the angry boosters with lots of disposable income.

Now here’s the thing. You aren’t taking meetings with big-boy boosters unless you are dead serious on taking their cash and patting Ford on down the road (that reminds me, this was the tweet of the day on Tuesday).

The reason is because you know said boosters could potentially leak the news to a news outlet at any point…which they did.

3. This was tweeted. I don’t know if it’s true (I don’t know if anything in this post is true) but I don’t doubt that a group of boosters was mad enough to throw something irrational together after a few beers on a Thursday night.

4. John Helsley eventually heard from these boosters with the high disposable income and wrote his piece on how Ford might be bought out which was picked up everywhere.

Multiple sources have told The Oklahoman that OSU is considering a buyout of the basketball coach’s rich contract. Key word: considering.

5. Somewhere in the middle of all of this, a well-known coach who has been to three Sweet 16s since Ford last won a tournament game was contacted, according to my sources.

I’m not sure he ever considered the gig or even what was said to him. I do know he was convinced it was over for Ford in Stillwater, though.

How could he not think that if he was being contacted about the position?

6. Anyway, in the case of Helsley’s piece “considering a buyout” meant “didn’t have enough cash despite a few boosters with lots of disposable income” which mean they needed to call in the Big Grandaddy to close.

7. I don’t blame Big Grandaddy (not to be confused with Big Dady, by the way) for getting tired of bailing out OSU every time it needs something (Freddie Mac U. amirite?).

He probably said “no, I have a couple of islands I want to purchase…oh and a lot of people follow me on Twitter…bye.”

8. Then Big Grandaddy tweeted his support of Travis Ford knowing that OSU had no choice but to follow in his footsteps because it didn’t have the cash to make the move.

This is the play of a man who has made his billions by simply understanding just who holds the most power in the room.

9. Holder then released a statement because his hand was forced and the whole thing was over in a matter of minutes which, by the way, was a long time (especially in internet time) after Helsley’s original story on Monday.

If you weren’t working on something behind the scenes, would you wait 36 hours to shoot down a massive local story disparaging your head ball coach?

I don’t think you would.

When I look back at this contract, it has “let’s give him all of the money in case Kentucky really needs him and Boone can bail us out if it goes badly” written all over it.

Then when it comes time for Boone to do the bailing, he goes the other way.

I’m sure that’s not how it explicitly played out, and maybe it wasn’t even considered, but it sure feels like it. Somebody who knows Holder quite well recently told me that contract did not sound like him at all which I agree with.

Still, you get the blame if you’re the one in charge.[1. And really, who cares about any of this when the football team is making $50 million a year?!]

Again, this is all conjecture. I have no idea what happened here other than the fact that I was signed up for another year of crappy hoops against my will.