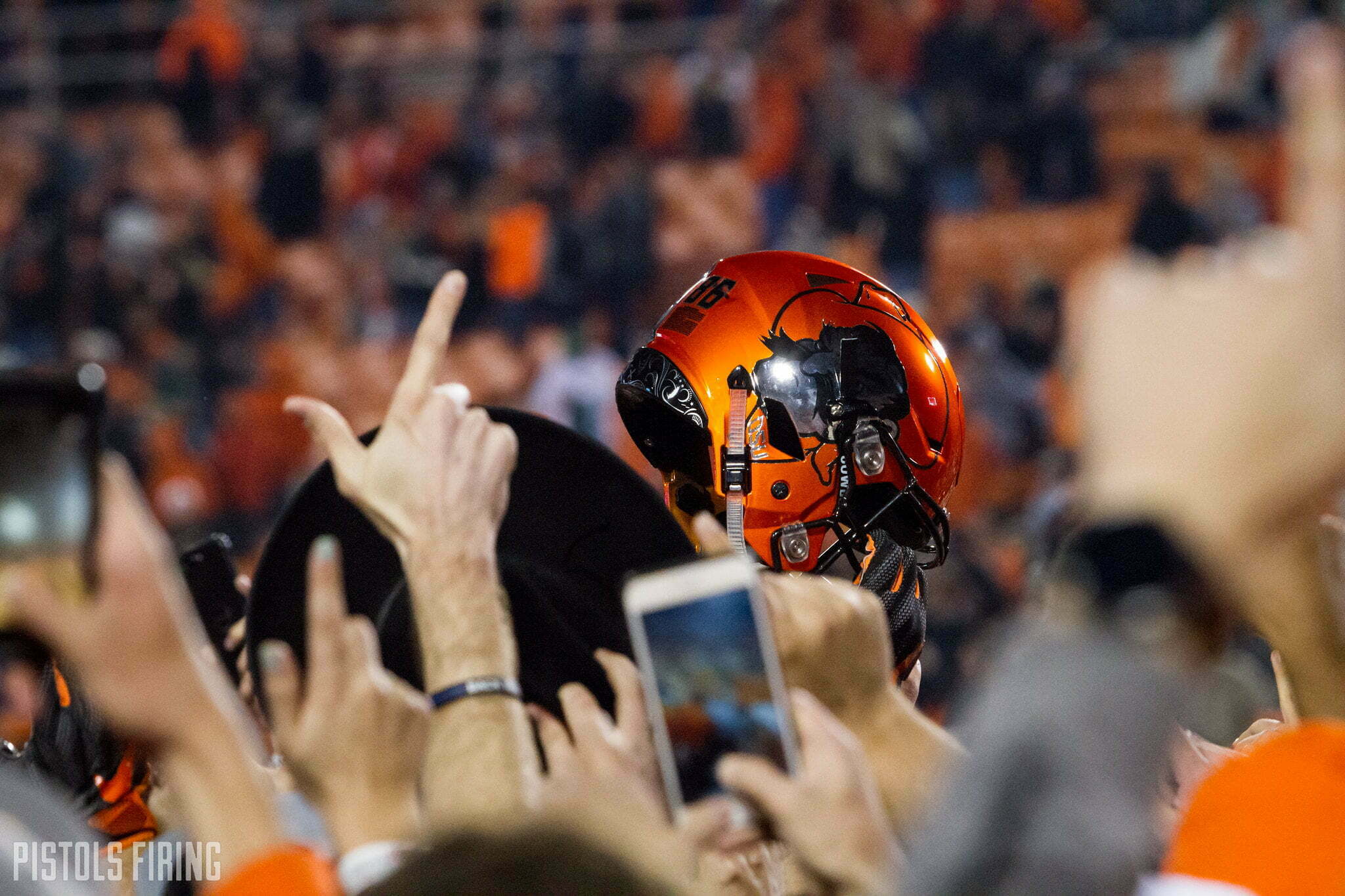 What was the point of sharing the picture of Mike Gundy donning an OAN T-shirt? What were your intentions in doing so?

Those are the two most-asked questions I’ve found — in my email, in my texts, in my messages on social media — over the last month. From my parents, from random folks I’ve never spoken with. And over the last month, it’s been the last thing I’ve wanted to talk about.

Since sharing that photo, it’s been a whirlwind for Mike Gundy and OSU’s football program. Gundy has issued multiple apologies publicly and privately. He has taken a $1 million paycut and reworked his contract.

It’s also been one for me, too, from the moment Chuba Hubbard weighed in on the photo and threatened to boycott the program. The blowback personally from sharing the photo has been fierce and constant from every circle of the internet, including the circle I’m most deeply passionate about.

I get why, too. Maybe not the severity of it, but certainly the general sentiment. Had I not shared the photo, perhaps it never sees the light of day outside those that follow Captain Steve Barnes updates on Facebook.

The answers to the questions are nuanced. If you want the answers at all, that is. Some have already made up their mind that I wanted to nuke Oklahoma Stae’s season, which is fine, I guess.

But the truth is that ain’t true.

The real answer is two-fold. Both folds are simple.

And the first reason is the most obvious: I found it funny that a football head coach would wear a T-shirt representing a news network. I mean, who does that? OAN, CNN, FOX, etc. No matter the network I thought it was … quirky. And maybe a little too on brand for a man who tucks in his sweatshirts.

The second reason is the nuance. OAN is … problematic. For many reasons that I knew about prior to seeing the photo, and for many reasons that Gundy himself has explained since the photo went viral. He espoused the network in April out of the blue by describing it as down-the-middle. “There’s no left. There’s no right,” he said.

I know that to be false (and he does now as well). It is not in any way comparable to CNN or MSNBC or Fox News. The network has persistently been pro-Trump, has skewed polling results to favor Trump, regularly pushes conspiracy theories, has ties to Russia and has denigrated the Black Lives Matter movement. OAN is a pick-your-poison of problematic agendas, the latter of which clearly struck a chord with OSU’s athletes.

“I didn’t know some of the stances [OAN] had taken,” Gundy said last month about OAN. “I didn’t know that. But then you look at it and say, ‘OK, I was a dumbass.’ I put the shirt on, not knowing enough about the shirt.”

Do I have a problem with Gundy wearing an OAN shirt? Honestly: not really. It induces a grimacing-face emoji, sure. It’s odd and weird. But I’ll spill the same caveat here that’s been said elsewhere: he must also know the consequences of what he wears and be prepared to deal with the fallout, even if, technically, he’s free to wear whatever he wants. Truth is, he’s the leader of 100-plus athletes, many of whom are Black. By simply donning a shirt with an OAN brand, he’s risking the potential of alienating himself from his players. Don’t believe me, just look at the fallout that’s come from all of this. Players threatened to boycott.

I’m not here to claim some moral high ground. Sure, I was sharing a photo. I was reporting. But I can’t say I wasn’t aware that it could and probably would elicit reactions. I expected it would create a discussion. Since he espoused the network earlier this spring, I found it relevant he was doing the same again given the shifting climate of the nation. The shirt of a man who makes $5 million a year is relevant whether he’s fishing or farming or footballing. That’s the truth.

Did I know it would go that viral and the fallout would be so visceral? No. Did I know Chuba Hubbard or OSU’s players would weigh in? Absolutely not.

It seems there’s been real change that’s come about from all of this: OSU conducted an internal probe and found Gundy to be distant from his players, and Gundy has subsequently promised to change. That is a good thing! It’s clear in the reporting since this came about that the players were itching for change. They want more from their coach. They yearned for a better experience as Black student-athletes. Thus far they are getting what they want, and positive changes are being made on all fronts.

But to be sure, that is not my doing. I do not think I pushed this change into action and am not claiming victory. And I’m not here to ride in on my high horse and tell you Gundy was right and I was wrong or that my actions positively impacted OSU. All told, it was a headache for everyone involved. You can (and probably have!) already passed judgment about whether the photo should have seen the light of day. About whether I should have shared it.

In hindsight, I wouldn’t share the photo if I had a re-do. It was relevant to the public and I feel justified in sharing it, despite the fallout. But it’s affected people close to me, and it has affected my mental health. It’s affected OSU football and Mike Gundy. Maybe you don’t care about any of that except for what happens or doesn’t happen on the football field this fall. That’s totally understandable.

But I am human just like you. I make blunders just like you. Only problem is, my blunders usually end up on a big, blog stage. So when the egg is on my face, everyone gets to see it and collectively laugh. It’s a tough scene.

I feel like this is an inflection point for me in my career because this one experience didn’t happen overnight in the same way tension and distance between Gundy and his players didn’t happen overnight. It happened over a long period of time. I’ve always been willing to call out what I don’t see as right or what I see as hot-button, but in doing so, I’ve been cavalier at times in finding that angle, sometimes at the expense of others. I’ve tried at times to be too objective — to the point of actively swimming upstream. There’s a thrill in having a contrarian perspective.

There’s also a thrill in seeing how that perspective plays out on social media and in comments on our website. Thinking outside the box generates dialogue and discussion. Sometimes, it creates animus toward the subject in question or even at myself personally. But creating a reaction, as a human, is exhilarating. Addicting, even. Notifications file in and gratification soon follows.

However, in this instance, I did not consider the consequences of what my actions would create, and I deeply regret the fallout that’s followed in recent weeks. It was a “lol look at this” comment that I expected would elicit reaction but one that I did not expect would be so widely scrutinized, from my perspective or from Gundy’s.

Here’s the real human part of me in all this: All I want both personally and professionally is for OSU to thrive. I grew up as an OSU fan. I write for an OSU-centric blog that goes as OSU athletics goes. I not only want OSU to thrive, I kind of need OSU to thrive.

In the meantime, though, I want more than anything to move on. Mike Gundy is doing so and has pledged to improve communications and relationships within his own program. I’m doing so as well and pledge to be more transparent, forthcoming, thoughtful and kind as a writer and reporter in the future.