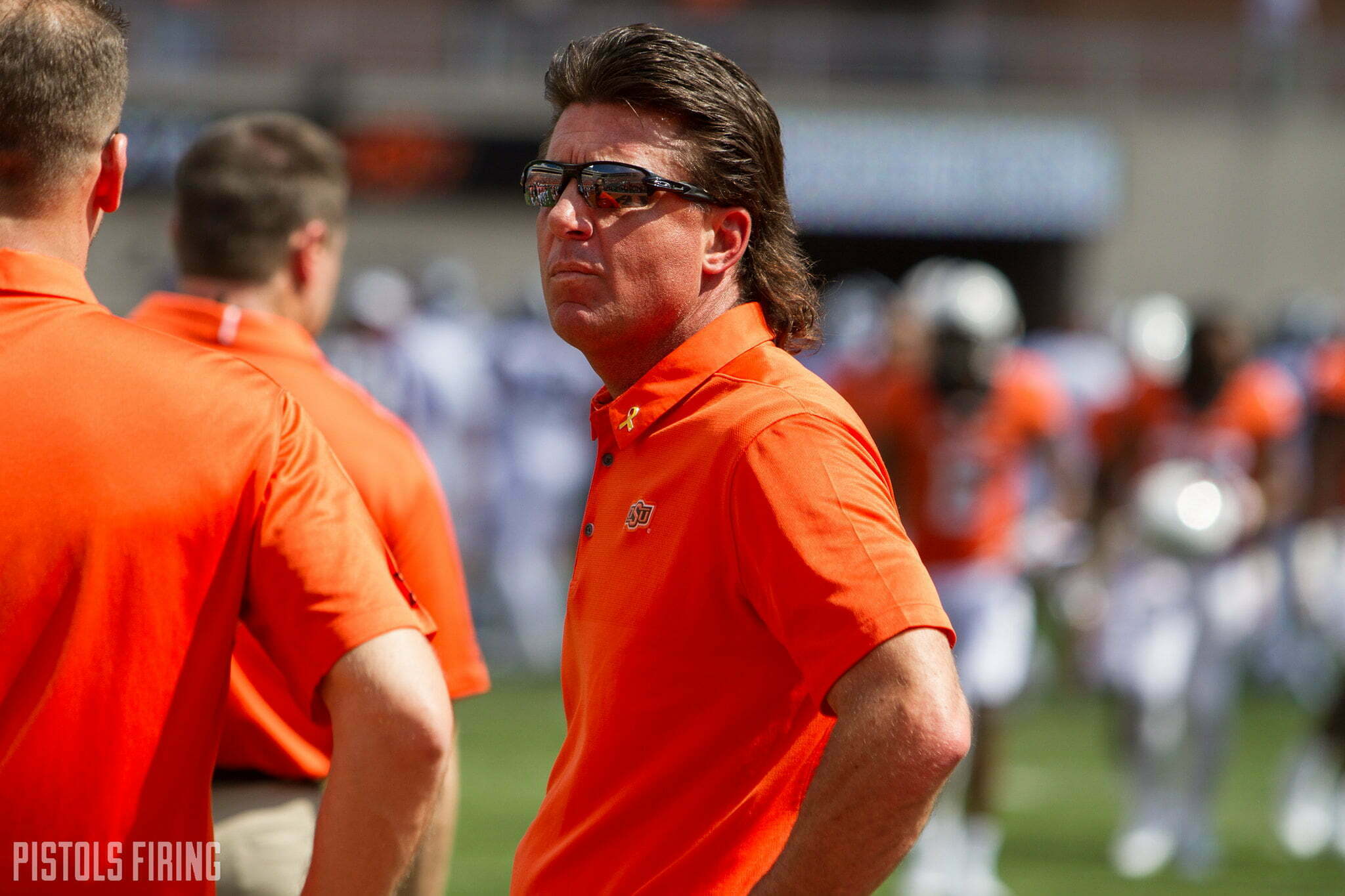 The aftershocks of the coronavirus pandemic are already being felt in the college football world even if the pandemic isn’t anywhere near complete.

We’ve seen that at Iowa State where the university aimed to cover a $5 million shortage by asking coaches to reduce their salaries by 10 percent. The same thing is happening at Kansas with Les Miles and Bill Self. It’s also happening at Oregon State and other places around the country. Boise State’s coaches have been furloughed. The whole thing is a mess.

Oklahoma State is in a position that is not dissimilar from that of Iowa State. Iowa State anticipates a$5 million shortfall (noted above) based on lost revenue from spring sports (much of that due to a canceled Big 12 and NCAA Tournament). It’s not crazy to think OSU is facing similar numbers given its revenue compared to that in Ames.

There may come a day — maybe it’s already happened — where Mike Holder and OSU ask Mike Gundy and his staff to take a temporary 10 percent (or more) reduction in salary. For Gundy’s crew — depending on whether this is solely the coaching staff or also administration — this could result in saving millions for OSU’s athletic department over the next year (the collective salaries of OSU’s football coaches is over $10 million).

But what about this: How great would it be if Gundy came out and led that charge? After a month of — how shall we say this — polarizing press, a voluntary statement that he’s going to give back a percentage of his salary for the good of the university and of balancing the budget and an encouragement to other coaches at OSU to do the same.

Gundy holds monster sway in Stillwater, and a move like that would be both followed locally and applauded nationally. It would be massive.

Nobody wants to voluntarily give up money, and it’s easy for me to sit here and talk about this (even if our business’ revenue has been undercut significantly because of COVID-19). But Gundy has made over $40 million in his career in Stillwater. There are only so many peacocks you can purchase.

Sometimes, the best leadership is the most costly, and if you’re the most significant leader at an organization and already rich beyond your wildest Midwest City dreams but unwilling to give up a portion of your salary for a year for the sake of that organization’s future flourishing, then I have some questions.

Gundy was actually asked about this at the beginning of April. Here’s what he said.

“Well, I’m sure those [salary reduction] discussions are taking place by people that have to make those decisions. I personally don’t want to get involved in that,” said Gundy. “It’s too early for me.

“So let’s see where we’re at in about six weeks before we start to get to a point where we have to make really, really drastic decisions. And that could happen. But I don’t want to instigate any ill will. I don’t want to instigate any negativity until we kind of know where we’re at. So in my opinion, let’s see where we’re at around the middle of May, early June, and then kind of get a feel for the medical community and in what they’re saying, before we start (discussing pay cuts for coaches).

“Now, somebody might say, ‘Well, you just said that we need to start planning for certain things.’ I’m talking about planning for different scenarios. OK. The people that are putting the pencil to a budget, they should be working tirelessly, looking at the athletic department budgets, and starting to try to find out different ways that they can make cuts, not just say, ‘I’m going to make a 10 percent cut across the board.’

“Let’s put a pencil to it, and let’s find out ways we can do it to where we try not to affect the economy, which is people’s salaries. When you start changing people’s salaries, then you’re magnified into the economy of the city, the county and the state. That’s the thing we don’t want to do now. Is it easy? No, it’s not. So for me, I’m gonna wait about six weeks. I’m gonna see where we’re at before I start to dive in something like that.”

Those are fair statements, and again this isn’t necessarily an expectation of any coach or leader, but boy wouldn’t it be cool if it happened? OSU is almost certainly going to need help making ends meet when it comes to balancing its athletic department budget. Nobody can make those ends meet like Gundy.

By the way, here’s what Iowa State coach Matt Campbell told the Des Moines Register after he gave up 10 percent of his salary.

“I am humbled and grateful that my staff and I are in a position that we can help the rest of our department through tough and trying times,” Campbell said. “I know we have a really special culture here, and we want to do whatever we can to protect it.”

How good is that?

Maybe Campbell’s hand was forced in this, but I’m dubious about that. If he hadn’t agreed to do this then I doubt it would have been made public in any form. It’s a big-boy decision that nobody is required to make.

Who knows whether it will take place at OSU — and again, nobody’s going to be bedowngraded if it doesn’t. But Gundy talks about OSU’s Cowboy Culture constantly — one in which you sacrifice for the greater good and take care of those around you. He has an opportunity to display that in the most public and significant way humanly possible in the days ahead. It would be pretty awesome if he took it.