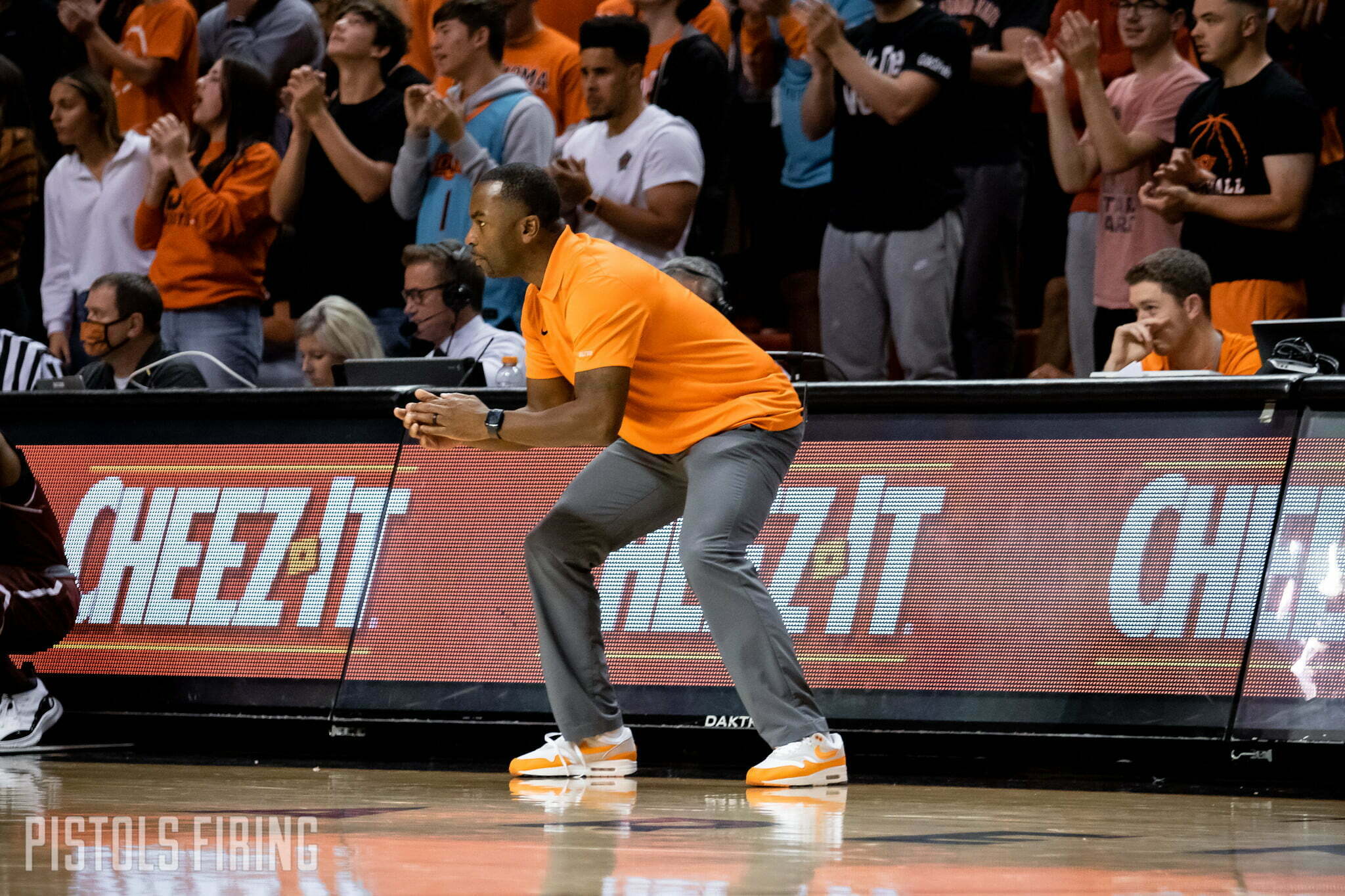 STILLWATER — The Cowboys had some fun in Gallagher-Iba Arena on Monday night.

Oklahoma State beat Charleston 96-66. Here is what OSU coach Mike Boynton had to say after the game.

“I’ll just open up with, you know, I think our guys were obviously ready to play, playing against a team that we have a lot of respect for and a program that’s got a lot of tradition that I know of having spent a lot of time in that area of the country. So, pretty impressive that our team played a great team-game tonight. I think when we are at our best, that’s what it will look like. A lot of guys scoring and a lot of guys contributing on both ends of the court, and then obviously, I think our defense was, you know, showing that it has the potential to be one of the elite ones in the country.”

“Yeah, I mean, you’ve heard me say it, I mean, he’s as talented of a kid as I’ve ever coached. Just naturally God-given ability. And there were days last year when he was the best player in the gym, with the due who’s now kicking people and leading, you know… I’m just proud of him for showing the growth and maturity that he’s shows since he had the incident this fall to accept responsibility for but be able to move forward and understand that, you know, don’t take the nags for granted. This is his last opportunity to play college athletics and try to make the most of it. He’s been a great teammate. And I’m thankful for him being here, and for his attitude about everything.”

On whether Bryce Williams’ dunk or block was more impressive

“So, I didn’t really see the block. I’ve seen the dunk, so it was impressive, but it’s not the best dunk I’ve seen him do. But, they were pretty big time plays. I mean, he’s a pretty special athlete.”

“Yeah, you know, this is my fifth year of coaching, and we dunk practice, Woody (Newton) doesn’t dunk in practice, but we dunk in practice a lot. We have a really, really athletic team, and so I’m never surprised when we finish plays that we practice, but when we’re playing the way we played tonight in an attacking fashion on both ends of the court, those things happen. So, whether it’s out of a half-court set or in transition, when we get a chance to get out run and they obviously wanted to try to run with us, you know, obviously we played a little bit better at that game tonight than they did.”

“Uh, I wish [Isaac Likekele] was in here to say that. I’m sure he would say, ‘Yeah.’ … No, I never design plays to go off the backboard.”

“He had a tough day today. I’m sure he’s getting some jabbing in the locker room, but, you know, his effort again was tremendous. He didn’t shoot the ball great, but he still made a lot of really, really good plays to save for that embarrassing moment.”

On if effort turned the game around after halftime

“I just think team basketball is what made it happen. I mean, Woody Newton who hasn’t been playing a whole lot, stays engaged, blocks a shot coming out of nowhere late. [Matthew-Alexander Moncrieffe], up 20-plus late in the game, was diving on a loose ball, right? Think it shows that our guys are buying into each other and what it takes to have a successful group. And that our team’s success is the individual success and if they keep buying into that, this team has a chance to do some really cool things.”

“It’s hard. We got 14 guys on scholarship, right, and a really, really talented group. It’s hard to play that many guys, otherwise you have a rag-tag game like we had against Prairie View, which is what we tried to get the point across to. Woody is going to be a really good player. He just has to kinda wait his turn right now. You never know when that opportunity is going to arise. It’s a game where people get injured or sick, whatever. If you stay engaged mentally and you practice well, then when your name is called you’ll have an opportunity to impact the game. I’m glad he was able to get out there a little bit tonight to keep himself in some rhythm.”

“You know, I’ve seen this happen before. I mean, guys who jump up all of a sudden and have real expectations and at the top of scouting report sometimes if they don’t get off to a really good start, particularly shooting the basketball, they start to press and start to take more of the burden. It makes it worse. And I think what I’ve seen from him is he’s kinda trying to just relax a little bit and let his teammates kinda take a little bit of the pressure off of him. And tonight was his night to get going. He’s continued to defend at a really high level. I think over time the percentages and numbers will be where they should be. He’ll be a double-digit scorer for us at the end of the day. I’m not the least bit concerned about where he is right now.”

On if Lob Stilly is back

“It’s back. We got a few more lob plays we haven’t shown yet, but none of them go off the backboard.”

On playing through bigs

“More getting them involved down low. Our three [centers] who played primarily, Tyreek and Moussa and Kalib, I think they missed two shots and had 12 blocks between the three of them. Pretty active frontline there. If you get that kind of production from those guys, that makes the game easier on your perimeter guys, it takes some pressure off them from having to make a bunch of shots. And Kalib’s as good in the post 1-on-1 as, I think, anybody in the country. It’s smart to play through those guys when they’re going to be a lot closer to the basket and make the game easier. I think when we play through them, I don’t know if we’ll shoot 50% from 3 every night, but the numbers will definitely go up.”

“Yeah, again, he’s another one — different from Woody because there’s not as much of a crowd in our frontcourt — but on maybe last year’s team he’s playing 20 minutes. He’s doing a lot of work in a minimal amount of time. But the thing you appreciate is his attitude. Every time he goes out there he gives you everything he has. And one day he may be out there for 20-25 minutes and if he gives that effort he’ll have even more of an impact. So, I’m proud of him for being a great teammate, for believing in what we do and for not minding waiting his time while there’s other teammates. He’s happy for them while they’re having an opportunity right now.”

“No, I don’t think so. I’ll be honest, if he was here, he may say he was a little concerned after he was here and we got Moussa committed. He was here already when that happened. But he hasn’t shown that in the least bit. He’s continued to show up with a great attitude and work hard. When his opportunity comes, he goes out there and tries to play as hard as he can for his teammates.”

“It’s always confidence. Some guys just have supreme confidence, like Thomas Dziagwa, and they don’t mind going 0-for-7. Some people go into a shell if they go 0-for-7. He was going to shoot 15 more, contested or not. Just consistent, consistent reps for those guys and seeing the ball go in the basket more frequently on a night like tonight, hopefully, they believe that that work is what made that opportunity exist for them and they show up tomorrow and put the same type of effort in for it.”

On Charleston trying to run with OSU

“I don’t expect we’ll see zone every game, but, again, I don’t know. I try not to guess what the other coaches will do. We just try to prepare guys as much as we can to impose our will and our style of play on the other team as much as we can, and tonight it worked out for us.”

On tying a program record with 16 blocks

“We can do several things defensively. We can really guard you in the half court because we can cover a lot of space with our length and athleticism, but then we can also pick you up full court and be disruptive with our quickness in the back court with Avery (Anderson) and Bryce (Williams) and Rondel (Walker). So, it makes for a difficult way to try to attack us, and when we’re connected like we were tonight, teams just gonna have a hard time getting shots off. I would have to go back and get the numbers, but I would imagine in six games, we’ve probably got eight or nine shot-clock violations forced, which is always a good number because it shows that you’re putting the teams under duress for long periods of time and that’s just deflating. Having a shot clock violation is, in my mind, the worst turnover in basketball.”

“He fits what we do. He’s got a grit and toughness about him that I think resembles a little bit of Ice [Isaac Likekele]. He’s a little bit more polished, coming in, offensively, but he’s gonna be a freshman. He’ll have to earn his way onto the court when he gets here just like all the rest of these guys do. But just like all the rest of them have, he’ll have an opportunity to do that when he shows up.”

On if he anticipates taking another recruit in this class

“We’ll have 13 guys on scholarship in August next year — I think.”

On if he has any more clarity on the scholarship sanctions

“As it stands, we have to take three over the next three years in some form, shape or fashion. And we’ll kind of discuss that as the year unfolds and we get closer to that time.”

“You never feel comfortable defending the 3 against a guy who can shoot it from 40. That’s what makes him different. I’ve coached against another guy named Steph Curry who could do that, and you’re never comfortable. We have to do a good job using our length. I think that may be an advantage for us on the perimeter. You’ll see different guys, probably, guarding him. But obviously, he led the nation in scoring. It wasn’t a fluke. He got 36, I think, in here last year, and I’m sure that he’ll be really aggressive looking for an opportunity to play against us again on his home court.”