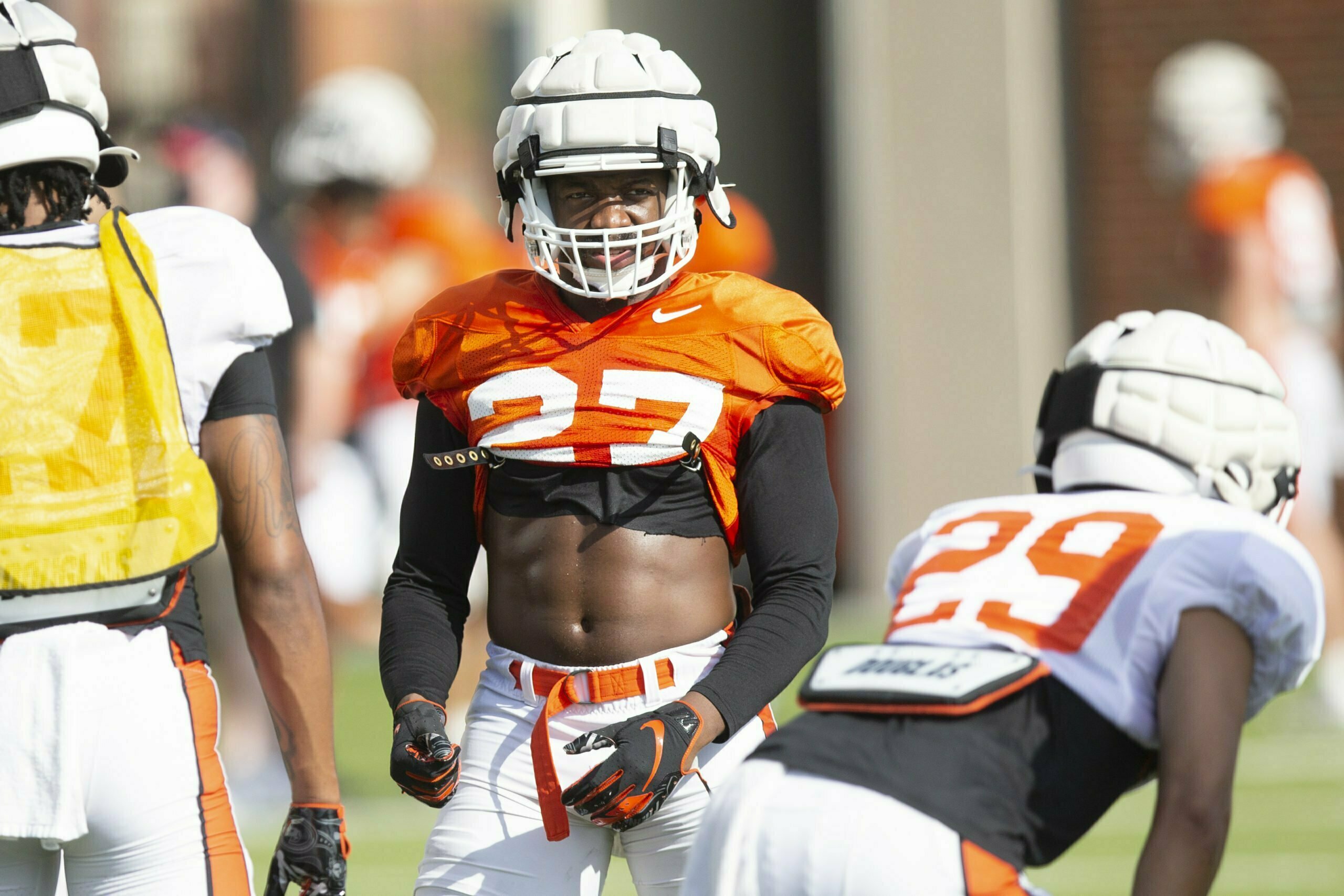 Yes, we are. The Cowboys are just a handful of them away from their season opener against Missouri State. After Thursday’s rendition Mike Gundy spoke in-depth about a certain running back that’s set to play a significant role in 2021.

Gundy, normally prone to temper expectations, spoke glowingly — but with a hint of caution — about Dezmon Jackson, comparing him to former Cowboy and All-Big 12 First-Teamer Keith Toston.

A deep cut about a slasher.

When asked the follow-up, Jackson said he considered himself both a power back and an elusive back. “I don’t like to limit myself so I believe I’m both.”

Regardless, the Toston comp is high praise for someone who’s carried the ball just 100 times in Div. I. To his credit, Jackson, like Toston, has taken advantage of his handoffs.

Thanks to injury troubles during his first year in Stillwater, the former junior college rusher was limited to just two games, one catch and no carries in 2019. But in eight games last year, he was the Pokes’ second-leading rusher despite backing up both Chuba Hubbard and LD Brown.

He toted the rock 100 times for 547 yards and four scores. That 5.5 yards per attempt is impressive despite the small sample size. But he’s still got a ways to go to belong in Toston territory.

In 2008, Toston set the OSU single-game record racking up 13.5 yards per carry against Missouri State (on 11 carries). He is also No. 7 all-time among Cowboys with a career average of 5.76 (on nearly 500 carries). Jackson probably won’t hit 13.5 ypc but there’s a good chance he’ll get at least a dozen touches against those same Bears during the opener on Sept. 4. Let’s see what he can do.

“He’s a little bit of a slasher,” Gundy said. “You don’t wanna go out on a limb too much, but for his performance in the games that he played in, he probably played as good as anybody in the country for the amount of reps he got in games — his production.”

So now Gundy has compared Jackson to Keith Toston and said he played “as good as anybody in the country.” That’s the extent of the hype, right?

“I’m somewhat hesitant and don’t say this a lot,” Gundy continued, “but he actually plays better in games than he practices.”

The game, the actual game that matters.

“He practices hard, but in games he slashes and seems to be more productive than he actually is in live settings in practice, which is kinda the important part of what we do. There’s very few young men that I’ve come across in my career that were actually able to do that. There is a big role for him on our team with what he brings to the table. When we put him in games last year and asked him to be successful, he was very successful.”

Now the Cowboys’ CEO is putting this Dez in the same group as actual GOATs. Gundy, now infamously, said that Brandon Weeden didn’t practice well which is what kept him from playing over a banged-up Zac Robinson in the 2010 Cotton Bowl.

(To be fair, Gundy actually said that OSU ran a lot of option stuff with Zac and that Weeden “didn’t look good in practice doing that.” Compared to Zac, I think I’d agree, but this is now folded into OSU lore and cannot be extracted.)

But even the greatest RB of all time, Barry Sanders, was famously less than sharp on non-gamedays. His teammates would often find Sanders napping during team meetings. Look at me. Now I’m the one spouting hyperbole.

“Actually, I’ve always referred to myself as not really a practice guy,” Jackson said. “I don’t know why but when I’m in practice, I don’t know, it don’t really click to me, but when I get on the field it’s just so easy.

“I think it’s just my adrenaline going knowing it’s game day, playing with my teammates and playing in front of fans and just doing something I love so I just think that’s just something that gets me going.”

So. Easy. This is entirely too much.

In all seriousness, these comps and kind words should pad Pokes fans’ confidence in the run game because an RB who may very well be a backup on OSU’s Week1 depth chart is drawing a ton of preseason praise.

Add in fifth-year rusher LD Brown, incoming transfer Jaylen Warren and rising star Dominic Richardson, and the Cowboys have four backs, any of which could take the lead on any given Saturday. Each has his own strengths but each appears able to lead an effective rushing attack. It’s nice to know that one of them evokes memories of some of the greats.