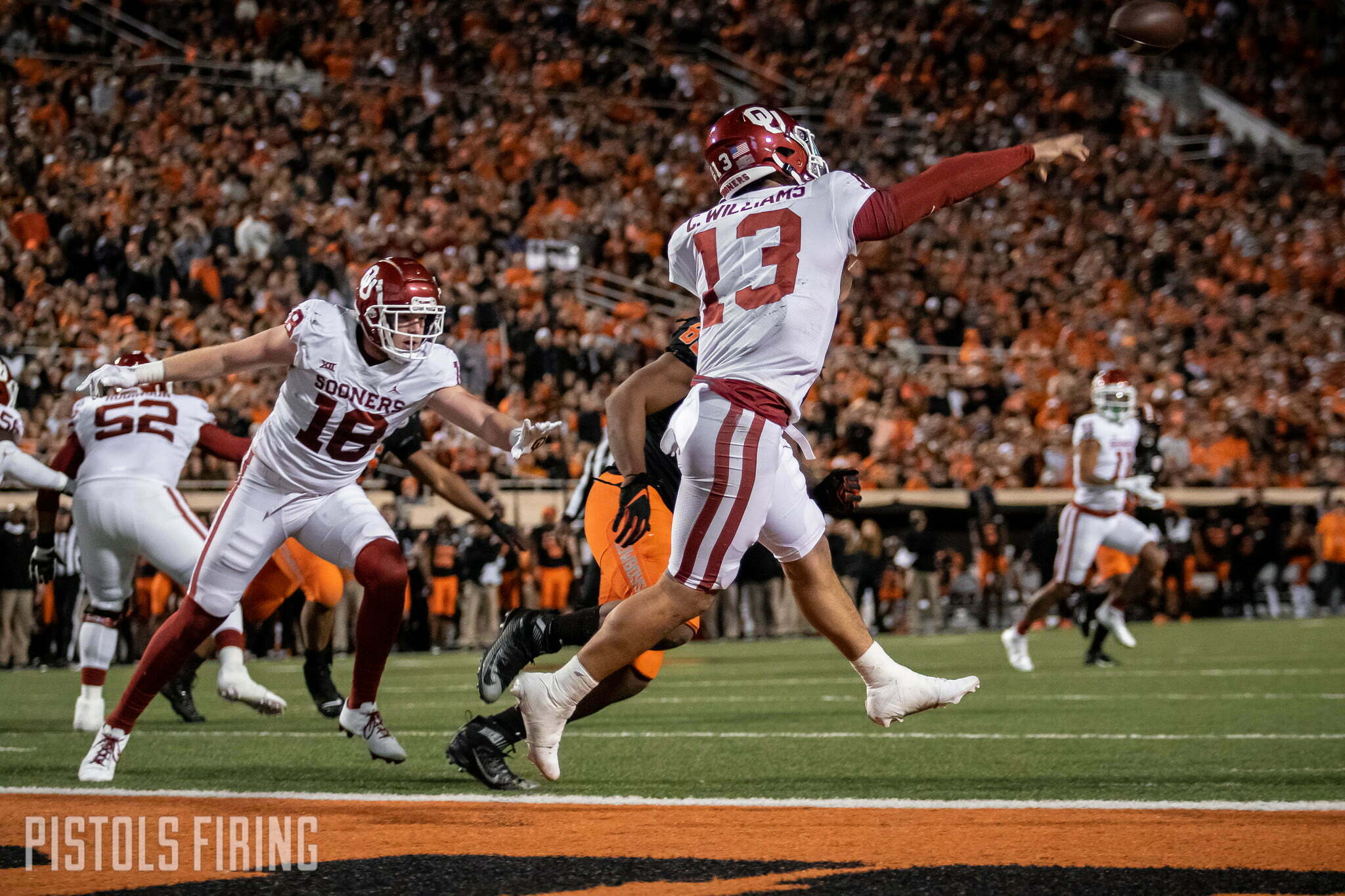 This has not been your typical football season in the Big 12, but it might be a preview of things to come.

The results of this weekend could have huge, lasting effects on Oklahoma State and its place in the Big 12, and the Big 12’s place in college football. If Oklahoma State wins a Big 12 title, gets into the College Football Playoff and more, there will be a new sheriff in the conference, and his name is Mike Gundy.

On Saturday, Oklahoma fans were knocked back on their heels when their team uncharacteristically fell to its rival, OSU. On Sunday, the rug was pulled out from under their feet when Lincoln Riley jetted off to Los Angeles to resurrect USC.

Oklahoma State boxed the Sooners out of the title race and became the top team in the conference. The Cowboys are a win away from a very strong case to be included in the College Football Playoff for the first time ever. They’d be the first program to represent the Big 12 in the Final Four not named OU. Times, they are a changing.

Nearly 24 hours after the USC news broke, Riley’s Twitter bio still read “Head Coach for the 6x Big 12 Champion Oklahoma Sooners.” That’s since been updated, but the six-time conference champs still don’t have a head coach or a solid forecast of the future as of the time of this writing.

Riley had been the golden boy, enjoying rare success for any first-time head coach, even one at Oklahoma. He was 55-10 in five years, had won four-straight Big 12 titles (was a play or two away from playing for another) and he’s coached the Sooners to three College Football Playoff berths. But regardless of past success, don’t just assume that the next Sooner head coach will pick up right where Riley left off. That would be asking too much.

Oklahoma is sure to make a quality hire and, whoever that is, he’s sure to enjoy success, eventually. Maybe he’ll even throw “Head Coach for the 6x Big 12 Champion Oklahoma Sooners” on this Twitter bio on Day 1, but things won’t be the same for OU next year or the year after, and maybe ever.

As we’ve seen at schools like Texas, and heck, USC, donation dollars, facilities and winning tradition isn’t enough. You have to have direction, recruits and the perfect situation (the Big 12) and then things have to fall your way from time to time.

The Sooners’ days in the Big 12 are numbered. We all knew that. But they probably expected to leave the league like perennial champs, marching off toward the greener pastures of the Southeast, triumphant, with their bovine companion in tow. But now everything will be different.

Not only has the golden boy left OU, he left it in the lurch.

The same day the USC news was announced just so happened to be the start of the NCAA’s contact period, when coaches can make in-person visits to prospects. Riley’s already turned at least two elite Sooner commits to the Trojans. Five-stars Malachi Nelson (the No. 2 QB in the 2023 class) and Raleek Brown (the No. 2 RB for 2022) have flipped their pledges to USC. More recruits and transfers will likely follow.

The Sooner machine will not be repaired in time to run the Big 12 in 2022, and it might not be fully rebuilt before OU heads off to compete against the likes of Alabama, Georgia, Ole Miss, LSU and others in the SEC for talent and wins. Will the Sooners suffer a similar fate as former Big 12 evacuator Texas A&M? Or Missouri? That will depend upon how fast the program rebounds, and OU’s been nothing if not stellar in replacing an iconic head coach. But this isn’t the smooth transition of power that took place in 2017.

Oklahoma has enjoyed rare, consistent success throughout its history but especially during the 21st century under the captainship of Bob Stoops and Riley, thanks in large part to the former. A future hall of fame coach groomed, and then handed the keys of his Ferrari to, his predecessor. That’s not how college football works anymore, as the latter underlined abruptly.

Juxtapose the dire situation in Norman with the slow burn that Gundy has ignited and maintained an hour or so north up I-35. OSU has been the most consistent winner in the league, other than OU, for going on a decade. Now things could be lining up for the Cowboys to usurp the Sooners based on what happens this weekend.

The man has had his troubles with OU, but he will soon be rid of the Sooners. And he might be poised to take their place atop the Big 12 after running them out of town. If he plays his cards and title games right, Gundy could be the new king of the Big 12.

If what Gundy and others surmise is true and this was, in fact, the final Bedlam game played in Stillwater, his group slammed the door on the rivalry that’s plagued them to open a new one of potential conference supremacy.

Spencer Sanders was pull-quoted and misquoted for his Bedlam prediction a week ago, but his actual message rings true.

Coming into 2021, the Big 12’s first-team passer was penciled in to be a “Spencer,” but not the one that led his team to Arlington. Its top running back and Offensive Newcomer of the Year was not supposed to be the Utah State transfer.

We thought the defense would be good, but no one expected it would be elite. It is, by the way. And there’s a pretty good chance that most of Jim Knowles’ playmakers and depth pieces are back a year older and stronger in 2022.

A win on Saturday could be the first title of many for OSU in the new-look Big 12. And that next iteration of the conference isn’t looking too shabby heading into conference championship week. Five of the New Big 12’s programs are currently ranked in the committee’s Top 25, and two might just make it into the playoff.

A 12-0 Cincinnati team might, low-key, be the biggest threat to the Cowboys getting into the playoff this season, depending on how this weekend plays out. OSU’s Big 12 title partner, Baylor, is also on a meteoric rise at 10 wins and No. 9 in the country a year after winning just two games. If Dave Aranda doesn’t get plucked by the next marquee job, he’ll be there to challenge Gundy. And don’t forget about Matt Campbell at Iowa State. At No. 12, BYU is currently two spots ahead of Oklahoma in the CFP ranking, and Houston is ranked at No. 21. #BringBackDana #LongLiveRedBull

The Big 12 is losing two heavyweights in terms of helmet sticker capital (and actual capital), but might produce a better overall football product, and the same could be said for hoops.

You can’t replace Texas and OU when it comes to advert dollars and SportsCenter coverage, but the Big 12 may have, unknowingly, upgraded in terms of on-field success in the near future. And if current momentum continues, and counts for anything, Oklahoma State could be set up nicely to run the conference.