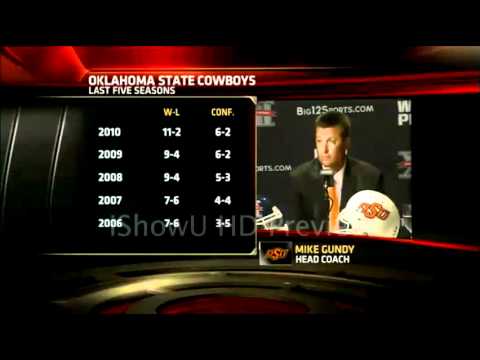 Big 12 media days are boring, let’s just be honest about that. If I have to hear one more question about whether or not Todd Monken will be able to succeed Crazy Dana successfully I’m going to Plaxico myself.

We all know that players and coaches are just spewing cliches and uttering rhetoric to the point that most of us could probably answer the questions for them.

Mike Gundy
What he said: (On the Longhorn Network) “I have faith in Mike Holder and our commissioner, Dan Beebe”
What he meant: “Boone’s working on it.”

What he said: “[Monken] doesn’t have a lot of play-calling experience, but he’s been very involved with it.”
What he meant: “I text with Dana every night and have lucid dreams about Joseph Randle flea flickers.”

What he said: “I would agree that my antenna went up when I started to hear [about the Longhorn Network].”
What he should have added on: “Thankfully I only wear visors.”

What he said: “I think [the round robin schedule is] going to help our league.”
What he meant: “I’m elated to not have to deal with all those hippies in Boulder anymore.”

What he said: “I think we have a number of teams in our league that are competitive enough to win. This league has been very difficult. And because of the ability for offenses to score, and to score fast, ultimately I think it will come down to how a team will perform on defense and special teams.”
What he meant: “Bill Young and Joe DeForest will be looking for new jobs and homes if we don’t run the table.”

Justin Blackmon
What he said: (On the draft) “I’m just taking it day by day.”
What he meant: “I’m entering the draft at 12:01 AM the day after our bowl game and if Weeden hangs me out to dry over the middle one time this season I’m going to wrap Adam Scott’s long putter around his neck.”

What he said: (On who Gundy must have been thinking of when he (Gundy) said Blackmon came in as a freshman overweight) “Tracy Moore”
What he meant: “Tracy Moore still owes me for taking one for him in Dallas last year.”

Brandon Weeden
What he said: “Last year, I walked into the room here and guys were having to look at my name tag.”
What he meant: “How does my 1st team all-conference selection taste?”

What he said: “[We] have to go on the road to all the Texas schools”
What he meant: “Screw you, Baylor.”

What he said: “Dana Holgorsen is a happy go lucky go who likes to have fun”
What he meant: “I almost died one night last year at the Winstar with him.”

What he said: “It’s fun being a Cowboy.”
What he meant: “I’m taking bowling and golf for six of my 12 hours this fall and leading this team to New Orleans, how badly do you want to be me?”