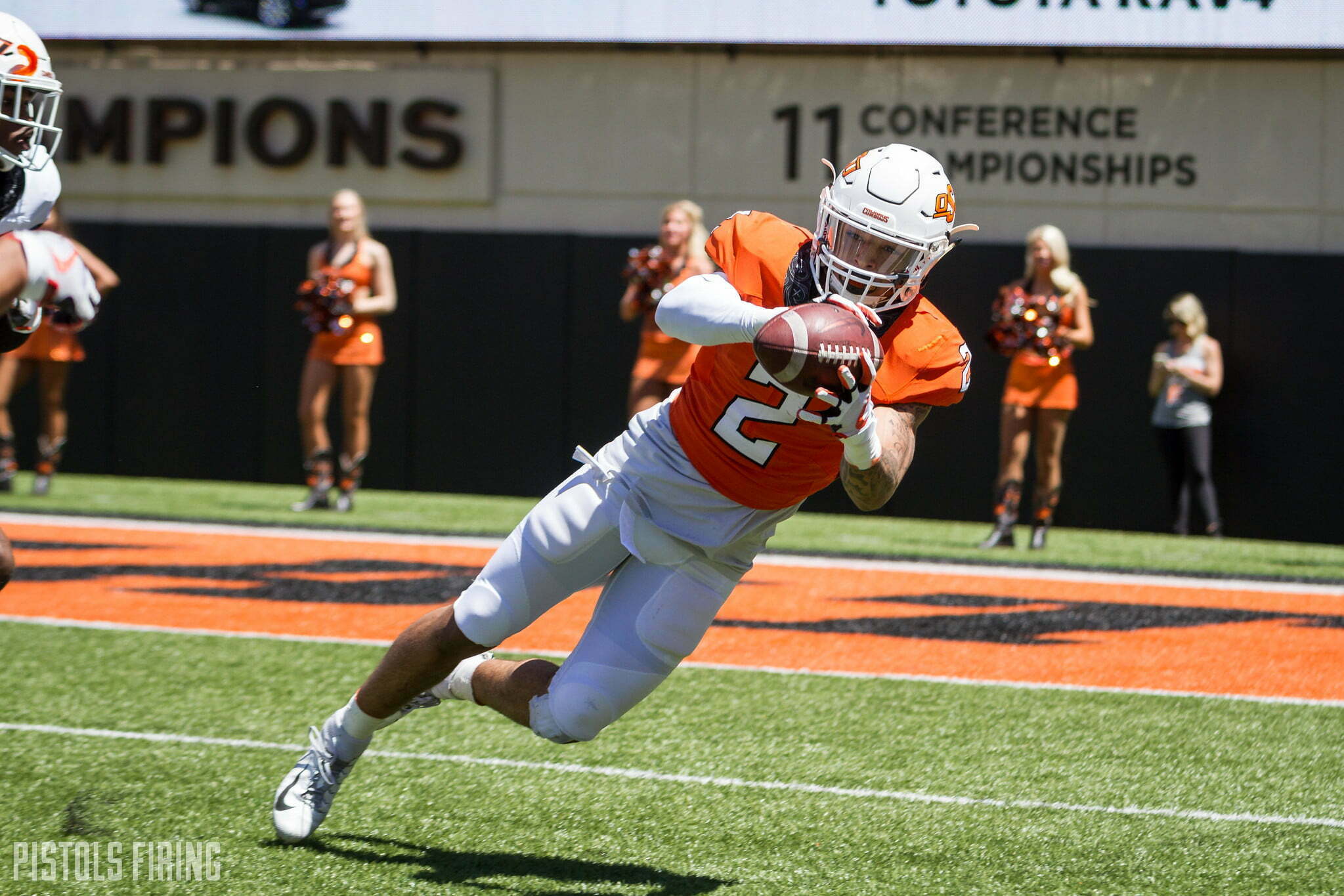 There are a lot of right decisions Kasey Dunn can make this season, a product of his embarrassment of riches at wide receiver.

Oklahoma State’s consistent production of cable pass catchers has led to more and more receivers going to Stillwater to get some of what Dunn is dishing out. The Cowboys looks as deep as ever at wide receiver in 2019, and here are some things we learned about the group this spring.

Despite everyone going crazy about C.J. Moore’s performance this spring, Tylan Wallace is still the man.

In what got lost in the Moore hype from the open practice was Tylan Wallace making some ridiculous one-on-one catches. There was one fade route I remember in particular where Wallace got past Kemah Siverand. The incoming pass was a bit behind him, but Wallace was able to track the ball and backpedal a step or two to come away with a nice, falling catch.

It was the kind of stuff he was outstanding at all last season, and if the Cowboys can get close to, much less, surpass the type of performance Wallace gave last season, they’ll be in good shape.

The first time Gundy met with the media after the pads came on this spring, Gundy said Moore was “making a few plays.” Then a few weeks later, a video comes out of Moore making a one-handed touchdown reception (again notice Wallace doing ridiculous things that the new guy overshadows a bit).

So at this point Moore’s hype train to Corvallis, Oregon, was nearing capacity. Then he goes on to make Megatron catch after Megatron catch in front of the fan base to send those already excited about a highly recruited, in-state prospect into a state of euphoria. Gundy poured a bit of cold water on all the hype Saturday, saying he wasn’t sure he is ready for a 60 play a game workload.

Moore is still a bit on the thin side, that’s undeniable. Gundy said Moore came to Stillwater last fall weighing about 158 pounds. He is listed at 175, but that’s still the lightest among OSU receivers 6 feet or taller — Moore is 6-5. Dillon Stoner, for example, is 6-foot, 198; five inches shorter, but 23 pounds heavier.

Moore has the summer to spend with Rob Glass, so it’s highly likely he’ll continue to close that gap.

“He’s had a good spring,” Gundy said. “He didn’t do much last year. C.J. has changed completely. I think he’s gained 30 pounds, so his body’s changed. He’s learning to handle it and body control and all the things that the guys that play wide out here have to do in order to be successful. He’s growing into his body and learning.

“He’s going to need another year to where you can just say, ‘We’re gonna leave you in there for 55, 60 plays a game and play at a high level.’ I don’t know that he’ll be ready for that, but he should be able to give us a number of plays early in the year, and we’ll see how he develops in live situations.”

With uncertainty surrounding how many plays Moore will be able to give in 2019, there are snaps up for grabs.

We’ll start with Stoner, an interesting proposition considering he has spent his Cowboy career in the slot. But, he has the most experience of any receiver on the roster, making him more than capable of the move.

Braydon Johnson is a speed guy, and at 6-1, 195, he might be the most comparable to Tyron Johnson. Earlier in the spring Braydon Johnson said he has played inside and outside, but more in the slot. Moving Stoner outside could open up room for him inside.

It’s all a big wait-and-see, but the Cowboys definitely have the bodies for it.

“(Tyron) surprised us,” Gundy said. “We’d certainly like to have him back out there. We’re immature there. We don’t have anybody that’s ever played a game there. Some maturity there would help, whether we have to move Stoner outside at certain times, that’s been a discussion. We’ll just wait and see what happens. When we get in the middle of August, we have to make a decision and go with it. The good news with Stoner is he can play every position. So, if we needed to make a move, we certainly could.”