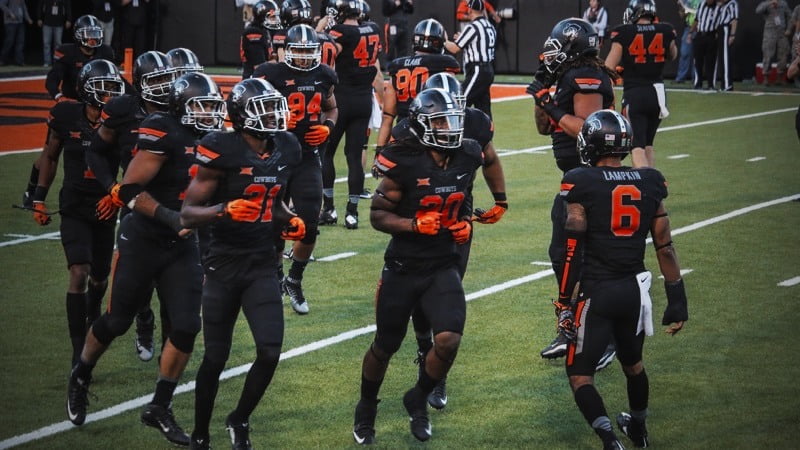 The College Football Playoff Committee rankings may be the only ones that matter, but there are plenty of other opinions on how to rank all 128 teams in the FBS. In fact, there are 106 other opinions. You can see them all here if you’re really curious, but I thought it would be interesting to see how the opinion of the CFP Committee varies from the “wisdom of the crowd” — the other 106 polls. Let’s take a look. Green means the CFP Committee rated you higher than the group of 106. Red means they rated you lower. Here are a few notes.

None of these teams is more than a single spot away from their group of 106 rankings. Hard to argue to much (yet).

I can understand why Iowa is No. 5 in the CFP poll. They are undefeated in a Power 5 conference. I think we are better, but I am biased. The problem is, so is the Committee. Jeff Long’s comments about being solid on both sides of the ball are a clear knock against the Big 12 and reveal what some of the important discussions going on in that room revolve around – a disdain for the style of football being played in the Big 12.

You may not find it in your heart to feel sorry for the Sooners, but they are the most disrespected among the CFP top 10. Still, I wouldn’t worry too much if I were an OU fan. The 538 blog says you have a 92 percent chance of being in the playoff if you win out.

Both teams are five spots better in the CFP rankings than they are in the group of 106. I’m guessing FSU is ranked higher because one of their losses was to the Packers, I mean Clemson, but beats me why Utah is so well thought of.

My goodness. Eight spots lower in the CFP ranking. Now, maybe the Committee thinks they are garbage now that Boykin is out (could be true), but the Jeff Long comment was that they only had one significant test and they lost. That test was a road trip to the No. 6 team in their poll. Michigan State lost at 4-6 NEBRASKA (and required a Not Top Ten to beat Michigan), yet they are No. 9. Still, the Frogs didn’t do themselves any favors by sneaking by Kansas.

This is one interesting. I’m not sure where Houston belongs and I don’t think anyone truly does. The inevitable expansion to 8 teams in a few years will make these cases much more interesting.

Another interesting case. No team has such a wide dispersion of rankings within the group of 106. They are ranked as high as 10 and as low as 87 by the various polls. Just so happens that the CFP Committee has them nine spots higher than the average. Why? Well, they beat Condi Rice’s Stanford and Tom Osborne’s Nebraska. Watch out – they play Barry Alvarez’s Wisconsin this week. Win and they may sneak into the top four (sarcasm…kinda).

Now let’s pull back and take a look at the big picture to see if we can see any patterns. Here’s a look at the sum of the variances for each conference. Joel Klatt said it best: “The only criteria that has remained constant for this committee is you better not play in the Big 12”. But I disagree with him. The other constant is that you better play in the Big 10. If you do, you have to prove to the Committee why you shouldn’t be in the playoff. If you play in the Big 12, go undefeated or be OU/Texas and have one loss and then we’ll look at your application.

One final thing. Maybe the CFP is justified in their clear bias for the Big 10 / against the Big 12. Let’ find out. Here are how each of the 104[1. Why 104 polls instead of 106 like I mentioned above? I removed the two human polls (AP and Coaches) for this one to remove any human bias.] computer polls rank the conferences: The Big 12 finishes second behind the SEC. Not only that, the Big 10 can’t even muster a 3rd place finish. Whether it is Osborn & Alvarez ramming their old school football bias down the CFP Committee’s throat or not, this is a real problem for the Big 12.

As a conference, we shouldn’t have to apologize for the way we play football. College football has become a beauty contest, and unfortunately for the Big 12, the judges like Model T’s instead of Ferraris. Texas and OU, the real powers of the conference, need to make sure we have a strong voice at the table from now on or this will be an annual ritual.