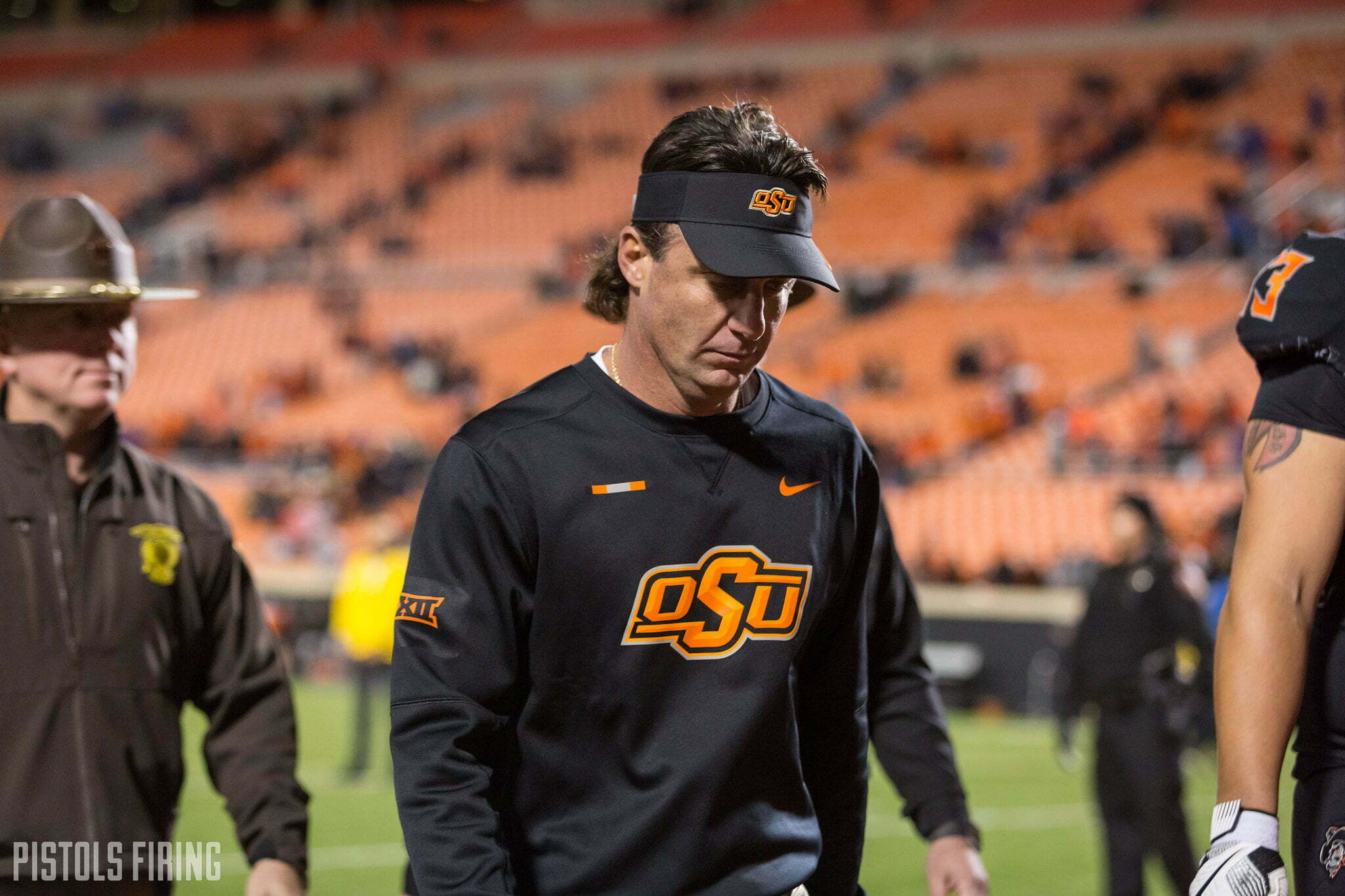 Mike Gundy’s week started with a tense press conference on Monday. It ends with a reminder on Thursday that he is very rich and has been very successful over the past 15 years. What happens on Saturday could fall anywhere between those two ends of the spectrum. Hollerin’ Mike. Big Earnin’ Mike. I don’t know which version we see in Ames this weekend, but what I do know is that the questions you’re asking and the feelings you’re feeling, they’re legitimate.

Loyal and true — blast those words — don’t mean what people think they mean. This is not a conversation about the role of the fourth estate either. That’s been well-documented ’round these parts (👋 Jalen McCleskey). For fans, it’s fair to ask questions, to query in rational, thoughtful ways when the trajectory of something you thought you understood turns out to not really be pointed in the direction you thought it was pointed in.

I love Mike Gundy. I do not want OSU to fire Mike Gundy. I am pro-Mike Gundy. But to take the “be loyal and true!” argument out to its end, you have put apply a painted-on smile and say you’re cool with 0-12 seasons. Silliness. You end up looking like this: 🤡.

Anyway, I could chirp and crow all day about this — and I definitely have on our podcast, which you should subscribe to — but let’s get into our stuff, shall we. Here’s why it’s fine and totally normal and you should not feel guilty whatsoever for standing up, looking around and saying, Is this how it’s gonna go?

1. Some fans (many fans?) for whatever reason love to terminate the employment of a person they’ve never met over literally anything. OSU throws an incompletion in the first quarter against Oregon State? Fire Gundy. OSU loses one game in mid-October in [pick any random year]? Fire Gundy. OU beats Texas? Fire Gundy. It’s breathtaking to be honest. I’m amazed by the dedication to what seems like a bit but is not actually a bit.

Howevah! The murmurs in OSU world about Gundy and the program are not unsubstantiated.

This chart shows a trailing 25-game win total over the course of Gundy’s tenure. Gundy has won 14 of his last 25 games, which is the lowest number since 2008, which was also the point at which he’d played enough games to establish a respectable number to begin with. The number never dipped this low even in 2014. 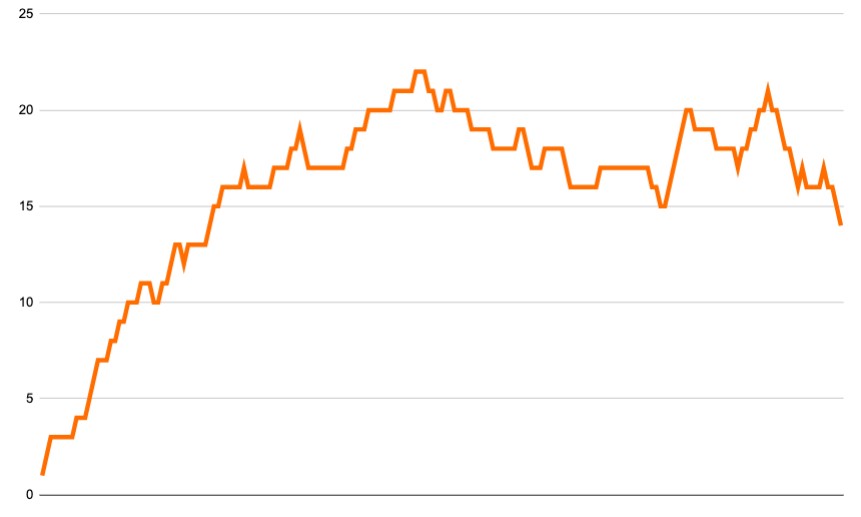 Even worse, if the season ended today, it would be the worst 25-game run at the end of a season since 2007. Even at the end of the 2014 season, OSU had still won 16 of its past 25 games as a program. Things were bad — far worse than this year — but on the whole they weren’t as bad.

Here’s a snapshot of a 25-game rolling count at the very end of every season. For example, at the end of the 2011 season after beating Stanford in the Fiesta, OSU had won 22 of its last 25 games. 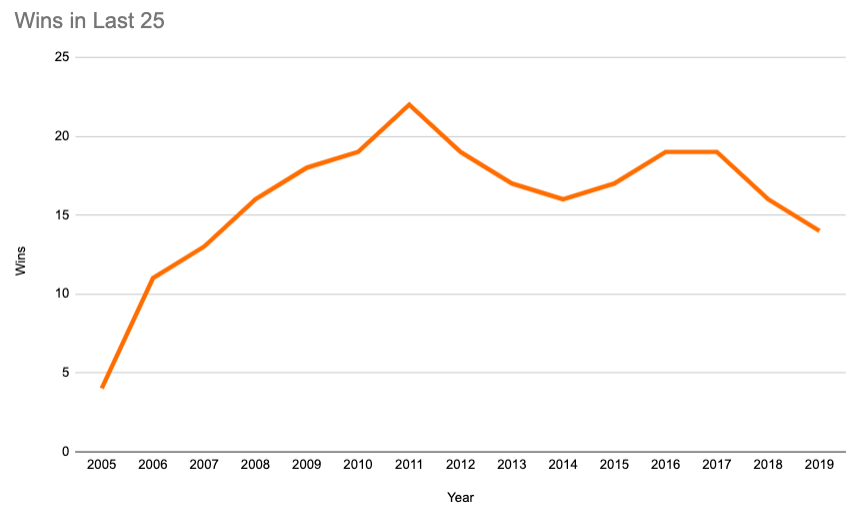 So it doesn’t take a mathematician to see trajectories and trends here. It’s not a very complicated thing.

2. I’ve said it a thousand times this year and will (hopefully not but possibly) say it a thousand more. Winning games you’re favored to win (especially at home) is the sign of a disciplined, good, hard-working team. OSU’s splits as a favorite.

OSU’s splits as a home favorite.

3. You’re paying his salary. OSU’s season ticket sales (not including contributions which are too messy to include) last year were $11.8 million. Operating revenue was $88.5 million. Gundy makes a little over $5 million a year. You do the math. OK, I’ll do it. You — the Oklahoma State fan — paid Mike Gundy — with all other things being equal and I realize we’re oversimplifying here — $625,000 last season.

4. Getting out while you still can: CFB edition. OU wrote the textbook. I wondered after Bob Stoops retired whether OSU’s window was widening because, ahem, there’s no possible way Lincoln Riley is gonna be better than ol’ Bob Stoops, right?

There’s a bit of nervous “we positive about this thing still cranking like it has been five years from now?” energy from OSU fans right now, and there should be. It can go badly (👋 FSU) The saving grace here, I suppose, is that it does seem easier to turn a program around quickly than it’s ever been (OSU just got hammered by one last Saturday). But I would prefer the baton handoff to be smooth, easy and successful — even if it’s jarring when it happens.

5. OSU isn’t a stepping stone anymore. They’re just not. The landscape has changed, partially with OSU but mostly in college football. The head football coach at Purdue makes $6.6 million American dollars annually to holler at 19-year-olds. You might still go from Ball State to Oklahoma State to Georgia now, but it’s not as much of a given as it used to be.

Consider this, too: As any industry is infused with cash (and college football has definitely been infused with cash) then that means that industry becomes more competitive. There are more entrants, more great candidates from which top-tier schools can pluck new hires. All of which decreases the likelihood of someone using OSU as a launching point for winning national championships at USC or Michigan.

OSU is a destination job now, not necessarily because of what OSU has done (although it helps) but more because making $3 million or $5 million a year when you’ve got momentum at a program is a lot easier to say yes to, whereas it used to be easier to take the check from the big boy school and run. This eliminates one of Gundy’s inherent advantages.

7. OSU has two pros at the skill positions. I get it. It’s a Sanders thing. But that’s sort of the point, right? It’s always something. A first-year starter at QB. A bad call by Yurcich late in the 4th. A first-year starter (again) at QB. A new defensive coordinator. All valid excuses, but I didn’t see anybody making them back in 2010 or 2013. OSU doesn’t exactly churn out top-50 picks, and you probably have a pair at tailback and wide receiver right now. They’re going to be on two straight teams that win, what, 14 games? Wasteful.

8. Staffs are hungrier. It is what it is. Matt Rhule, Matt Campbell, Matt Wells (all the Matts) and everyone else besides Mike Gundy and Gary Patterson and Les Miles are coaching toward the kind of windfall Gundy and Patterson and Miles have (deservedly) received. This is natural, and I don’t blame Gundy for it, really, but it’s something to keep in mind when thinking about the organization.

Would you rather have Chris Paul or SGA? I mean, probably Chris Paul, but, you know, maybe not depending on how good you think SGA is going to be. That’s a wild oversimplification that doesn’t take into account any financial pressure on the situation, but I think it gets my point across.

9. We have essentially created a monster that now you have to feed. His words, not mine. I’m fine with Gundy for now. I don’t think it’s wise or fair to evaluate bigger-picture matters until the end of the season. For all we know, Sanders flips a switch this week, and he hoses Iowa State’s Alamo Bowl dreams to the tune of 350, 100 and four total TDs. This is how college football goes.

But when you see questions asked about Mike Gundy and the Oklahoma State football program, remember that they’re not coming from the 1 percent anymore. They’re coming from the 20 or 40 or 55 percent that thinks smartly about college football and the context within which it is played. Mike Gundy has lost a lot over the past few years. Games, trust and the benefit of the doubt. I like Gundy and I like that he’s the head coach of this program so I hope he flips it around the other way before he loses it all.