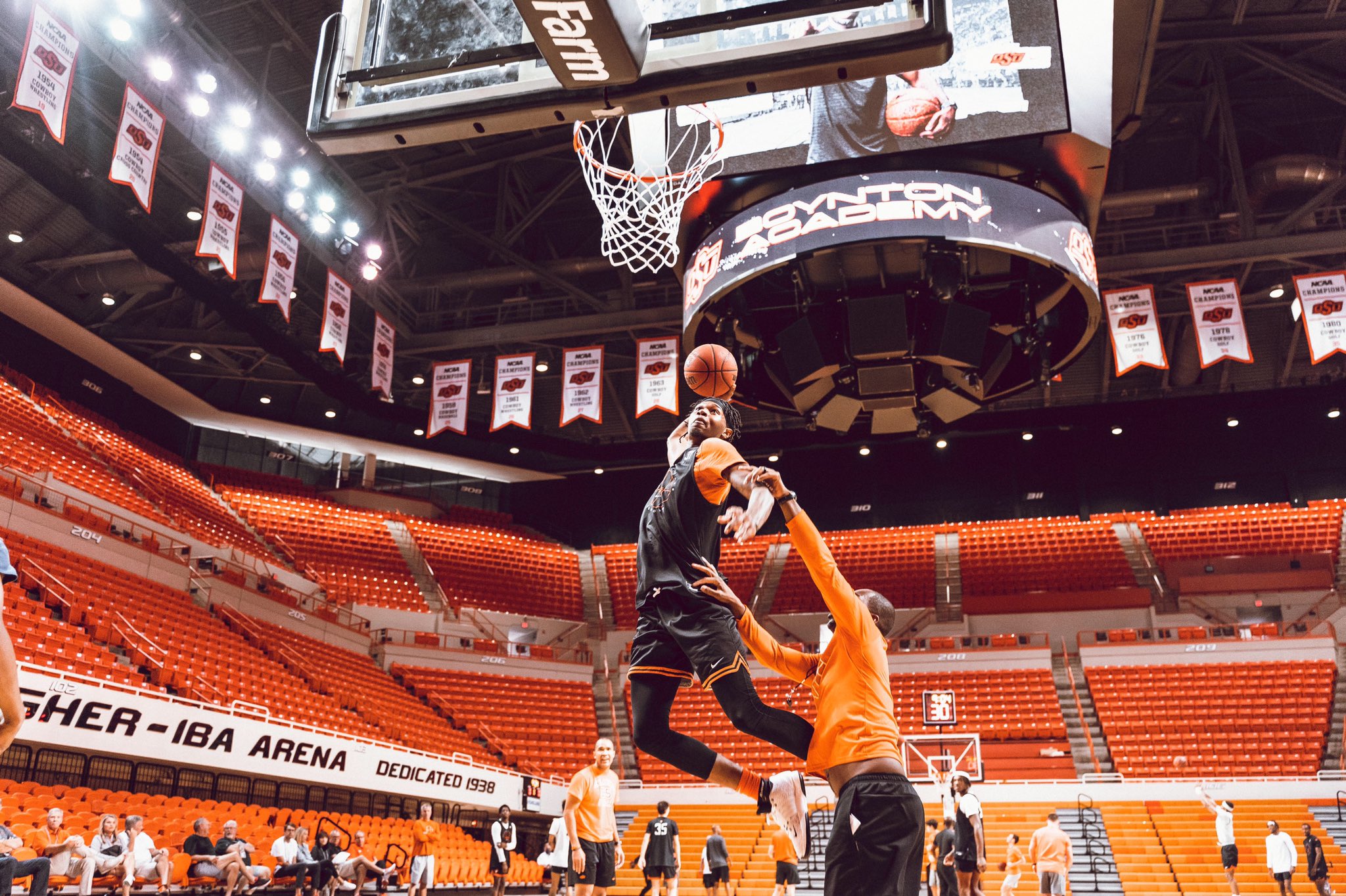 STILLWATER — Woody Newton is from the Washington D.C. area and played his freshman season at Syracuse before entering the transfer portal, and one text message started to shift the tides in him trading his city life for a fresh start in middle America.

Newton said Oklahoma State coach Mike Boynton texted him at midnight, asking him if he was ready to come to Oklahoma State. It stood out to Newton because of the time of day and that it was Boynton, unlike other schools who had assistant coaches do the recruiting.

“Genuine — my first time meeting Coach Mike was when I first stepped foot in [Gallagher-Iba Arena], matter of fact, the first day I got out here” Newton said. “Ever since then, it’s just been real genuine. He was real nice to my parents, showed us around. I thought that was real big of him because he could’ve had someone else do that also. It’s just been nothing but love and genuine since I got here with Coach Mike.”

Newton said Boynton was the first coach to send him recruiting info in the mail when he was still in high school. Back then, Newton said he did a little bit of research on the program, finding out that Tony Allen and Marcus Smart went to OSU, but he didn’t go in depth because he didn’t think he’d leave the east coast for Stillwater, USA.

“It’s a lot slower pace out here,” Newton said. “It’s a lot slower out here compared to the city. There were some weekends in the summer we just wasn’t doing nothing, just in our dorms or in the gym. In D.C., there’s always something to do. I just felt as if once I go used to that, and I just gotta be in the gym as much as possible, that’s where my fun is gonna come from, I would be fine. And that happened. I feel like I’m doing good with that transition also.”

The No. 147 recruit in the 2020 class, Newton initially chose Syracuse over offers from Arkansas, Georgetown, West Virginia, Penn State, Kansas State, Seton Hall and others. As a freshman at Syracuse, Newton played 7.9 minutes a game, averaging 3.5 points and 1.8 rebounds.

“Taking a year off of playing man-to-man defense because of zone, I feel like coming here, it was a real big adjustment,” Newton said. “Every coach and player could say that I really struggled when I first got here because you’re one your toes and just bouncing around, going from the wing to the block in a zone, compared to now, I really gotta sit down, slide my feet, learn rotations, drops, different ball screens coverages. I didn’t have to do all that at Syracuse. When I first got here, I really struggled with that.”

Newton said Rondel Walker, Isaac Likekele and Avery Anderson have provided guidance for him on learning Boynton’s aggressive defense and that he feels he gets better at it every day.

Newton provides a ton of upside for a hopeful Cowboy squad. At 6-foot-8, he hit 39% of his 3-point attempts as a freshman. He fit two of the Cowboys’ needs this offseason, providing depth in the frontcourt while being able to spread the floor.

He’ll get a major taste of Stillwater this weekend for homecoming, something that will unlikely be anything like he saw in D.C. or at Syracuse. It is all part of a string of falling dominoes that started with a midnight text.