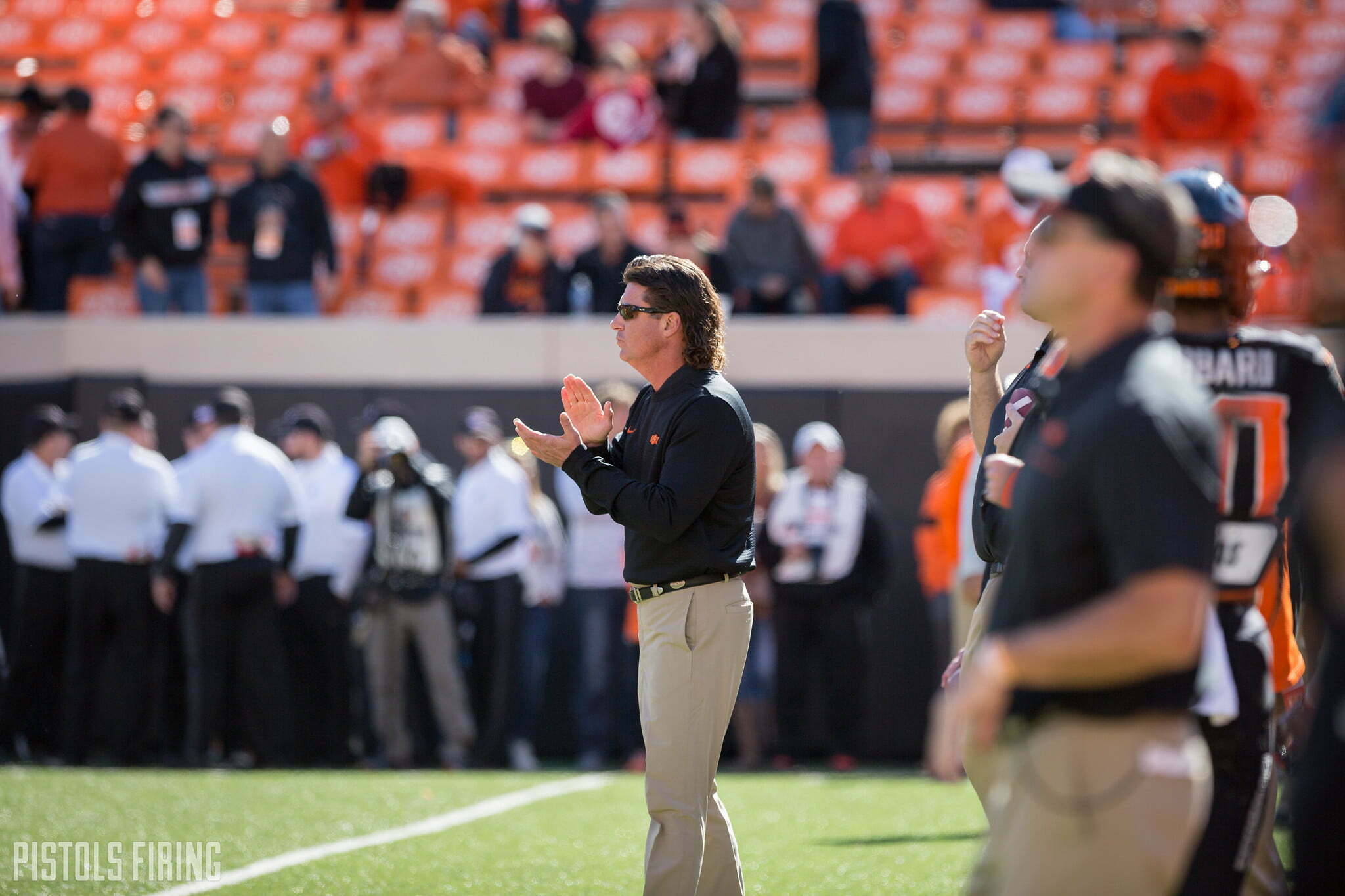 The PFB staff convened to chat about Oklahoma State’s upcoming road at West Virginia and what it would mean if we see Dru Brown earn the start.

Kyle Cox: First off, how worried are you about West Virginia being a trap game before Bedlam?

Marshall Scott: The fact that we’re talking about a potential trap game after the start OSU had in Big 12 play is kind of remarkable. I actually feel confident OSU will be ready for it, which is usually when everything starts to go down hill.

Kyle Porter: Haha, this is true.

I feel not great about it. Mostly because I’m trusting Gundy with a potential QB situation and trusting an Oklahoma State defense to lock it down on the road.

Kyle Boone: I’m irrationally confident OSU cruises here. How much moonshine can one drink before an 11 a.m. kick, anyhow?

Cox: I’d say I’m mildly concerned. OSU has proven — so far — to be much more disciplined than last year’s team when it comes to that sort of thing. The fast KU start after an off week was nice to see.

Cox: I have, maybe falsely, more confidence in this defense than I’ve had in OSU’s for a while. This whole roundtable might be one extended jinx.

Scott: Kolby Harvell-Peel is a legit All-American contender and a lot of his eye-popping stats have happened recently. I think all the defense needed was to sort out its pass rush, and now that OSU is forcing quarterbacks to throw under pressure, it’s causing havoc.

Scott: And he had a pick last week!

Porter: I was just going to bring up Trace Ford.

Cox: I need PFB to print KHP and Trace Ford posters for, er, my kid’s bedroom.

We are adult men with kids.

Cox: Ok, Marsh gets a poster for his cat.

What else gives you confidence (or otherwise) about WVU?

Porter: Having a Heisman contender in the backfield.

Boone: Yeah, true dat. Also … WVU just isn’t that great. Two teams trending in vastly different directions overall the last month. OSU is surging and WVU, save for a win over K-State, has been pretty meh.

Cox: Yeah, the unknown (or mostly unknown) is scarier than Austin Kendall.

I think OSU has started to find its offensive groove a little bit in terms of what they’re trying to do. It’s not the high-flying offense we’ve seen in the past, but they know who they are and what they’re doing. They’re going to run it. Run it again. Run it some more. And pass it every now and then depending on who’s taking snaps.

Cox: I think it’s mostly about OSU and not WVU. If the Pokes come out engaged like they have the last few weeks, I think it’s a somewhat easy win.

Since you brought it up, what if Spencer can’t go due to injury? How you feeling about a truncated Dru Brown era?

Porter: I’m fine with it. I don’t know that he’s as good as Sanders, but this is life when you run your QB 140 times in the first 10 games. You better be confident in the backup. OSU is.

Scott: We haven’t seen a lot of Dru, but what we have has honestly been pretty spectacular. Deep bombs to C.J. Moore and Braydon Johnson against McNeese (not great competition) then that fade to Dillon Stoner against Kansas (again not great competition). It wouldn’t be ideal, but there are plenty of worse back ups in the Big 12.

Boone: Oddly not that nervous about it, if it happens. Obviously you’d prefer to have your most talented QB out there, but Dru, to me, isn’t a considerable step down. Can he win you a game against WVU as a favorite? I think so. Now, can he pull off the unlikely and take down OU in two weeks? We’ll see. I think Sanders and his dual-threat ability is best-suited for Bedlam, but TBD on if we’ll get that.

Cox: I agree, with the caveat that the sample size is small. There’s got to be a reason he was OSU’s obv QB2. If it was for the sake of Sanders’ future development and Dru’s close to, or as good then that’s a bonus for OSU. It may not matter quite as much based on OSU’s offensive gameplan post-Tylan injury.

Porter: Do you guys think Chuba’s going to NY?

Boone: With Tua going down, I think the door is open. I’m not super confident it will happen — there’s not much national momentum about OSU as a team or about Chuba as a contender overall — but he has a reasonable shot at being the non-QB to get into the final mix.

Cox: I think he kinda might. An unfortunate injury and suspension will probably aid him in that but if he goes for 2,200, I think he gets the invite.

Scott: At this point, I don’t know how they would justify not inviting Chuba. And if he doesn’t win the Doak Walker, this town will riot.

Porter: It’ll come down to Bedlam and the 2K. If he hits two-thousand in primetime against a top-10 OU team, it’s going to happen.

Cox: Ah, a Bedlam win I can have some kind of confidence in.