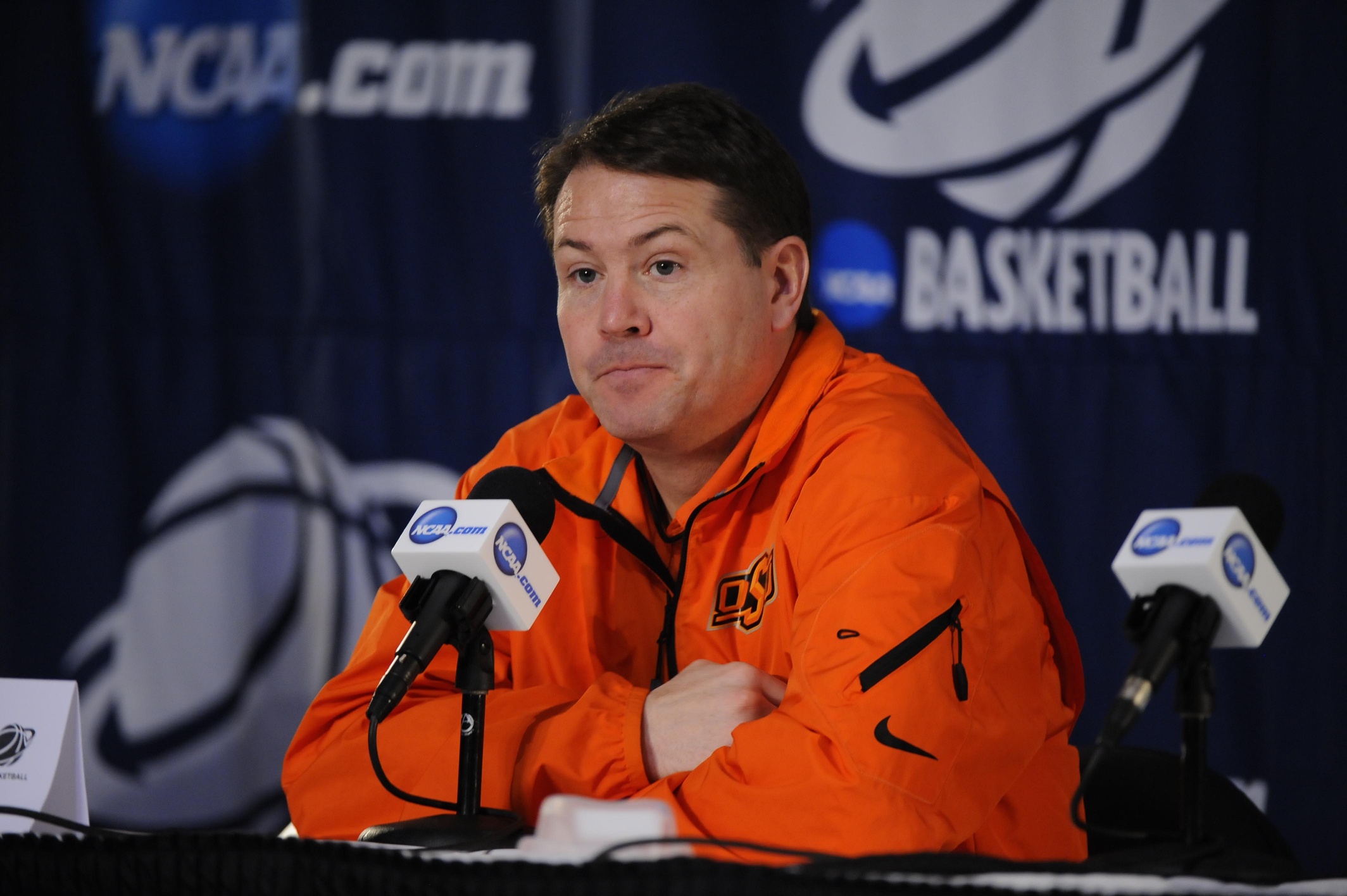 This is not a “Travis Ford is a wasteland of coaching ineptitude” piece. If you’re looking for that then you should meander on over to a message board post or Facebook or somewhere else besides this place.

This is, however, a piece about excellence and what it means and who we want to be as a school. It’s a piece about the past and about the future and a piece that’s not very fun to write but absolutely must be written.

I think Travis Ford gives a crap about his job which is more than you can say about a lot of people at their jobs these days. In fact, he cares more and spends more time on his craft than, I would guess, pretty much everyone reading this post (including myself).

The amount of money he makes doesn’t mean he should care more or less but it does set some groundwork for what success should be within the context of his industry.

First, let’s start with three parameters a fan base must draw around its coach.

1. How many years are an acceptable testing ground for a coach?
2. What is success defined by at a given school and has the coach lived up to that?
3. What is the opportunity cost of keeping a coach or letting him go?

The first question is probably the easiest to answer. I tend to fall on the more conservative side of these things. I think five years is a minimum for building something resembling a good program. The college landscape as a whole might disagree — Auburn just fired its coach after four and Virginia Tech after two (Two! Virginia Tech!) — but five plus seems fair.

Ford has had six and he has had good teams but he has hardly built a good program — the fact that losing a guy who averaged five points and five rebounds a game was the primary reason propped up by the program for why our season fell apart is evidence of that.

The second parameter is tougher to define but maybe easier to answer in regards to Ford. What is success in college hoops?

Conference titles plus early tournament exits will put you under the gun quicker than you can say “it took Bill Self awhile” but is that fair? Deep runs in March coupled with poor conference play seems like you’re playing with fire, scarecrow.

But by what measure, exactly, has Ford been successful?

Conference play? Five No. 7 seeds (or worse) in the Big 12 Tournament in six years.

And it’s not as if the cupboard was bare — the only NCAA Tournament win Ford has is with the players Sean Sutton left him (one of them a Big 12 player of the year).

So who are we as a school? What is our middle ground of success? I understand you’re going to have up and down years but to me, and I wrote this last season, we are a fourth-place, secound-round program. That is, on average OSU should be one of the the final 32 teams left in the Tournament and should finish, again on average, fourth place in the Big 12.

I feel like that’s fair. I don’t expect you to come in and win Big 12 titles and go to Elite Eights every year — that’s just not reasonable. But what isn’t acceptable, especially when you’re being paid like one of the 15 best coaches in the country, is repeatedly finishing in the lower half of the Big 12 and holding two minutes and 51 seconds worth of NCAA Tournament leads in the last four years.

That’s not what you get paid $20 million to do.

You can argue that he’s a great recruiter, I guess — he’s had three top 25 recruiting classes — but what does he have to show for that? Forte or Cobbins is his fourth-best recruit. Solid players, but hardly elite-level talent for a top tier university.

And this is where it gets strange because it might seem as if you’re holding against Ford that he was good at one part of his job (getting Marcus Smart[1. And let’s be honest here for a second, Sean Sutton got somebody as good as Smart — James Anderson — so let’s not put the Smart recruitment on this pedestal]) because he couldn’t live up to all of the expectations that other people set.

But Ford still hasn’t figured out what he wants to be as a program.

OSU is a strange place in that it’s not Lawrence or Chapel Hill or Lexington where one-and-done guys take a 12-month pit stop en route to the League. But it’s not Wichita or Spokane, either. You’re expected to recruit stars but also build a dynamic team.

And Ford clearly has had trouble putting those two things together.

Which brings us to part three of our game of parameters: opportunity cost.

It has been well-documented that Travis Ford’s buyout is not everything you have thought it was all along. Money, I suspect, won’t be a large issue.

But can you fire a guy who just went to back-to-back NCAA Tournaments? That would be kind of strange, right? And what are you missing out on if you don’t?

I guess it would, but what has Travis Ford done that would suggest to you that he can get to another NCAA Tournament without Marcus Smart and Markel Brown next season? He’s really going to coach Leyton Hammonds, Mike Cobbins, and Brian Williams to the Dance?

And even if he does, he’s going to get them out of the first round?

So again, what are we as a program? If we’re supposed to be a below average Big 12 team that just sneaks into the NCAA Tournament every season then I’ll shut up, that’s fine.

But I expect better than that and I think the rest of you do too.

One of my buddies goes to the same church as Ford and said it’s disconcerting to see him there on the weekends and then read things like this about him during the week. It’s not an easy existence to have your profession on the line, much less on public display, ever day of your life.

But the reality is that even if Ford is a great guy — and I’ll concede that if you want — and just because it’s not totally fair that his career plays out in the public forum doesn’t discount the fact that he hasn’t gotten it done.

If I write about golf for CBS for three years and I’m not bringing in numbers or creating a body of work that’s up to the standards set by CBS, I don’t get a discount because literally everything I do can be dissected by the public. That’s the collateral damage of the job.

That’s what you signed up for.

When Ford was given his extension after getting to the second round against Pitt in 2009 Burns Hargis said this about Ford and OSU hoops.[1. We won’t even get into this quote from Holder: “Coach Ford did a tremendous job rejuvenating our basketball program in his first season.” Well yes, a corpse would have been rejuvenating compared to Sean Sutton.]

“OSU basketball has a long and storied history and we look forward to Coach Ford adding new chapters of success.”

He has added new chapters all right, but they have not been of success. More like a how-to guide on lighting $20 million on fire.

Then this from Holder:

“He is committed to success for our student-athletes in the classroom and on the court, and he is committed to Oklahoma State University. This contract rewards him for the job he has done and demonstrates OSU’s commitment to him. We consider Travis a rising star in the coaching profession and look forward to his leadership for many years to come.”

Well that student-athlete ship has sailed and is currently circling the Bermuda Triangle but his leadership is the thing that interests me most.[1. And we aren’t even touching on his in-game coaching!]

On Friday after the loss Ford noted that nobody knows what goes on behind the scenes with him and his team.

All I know is what I see and what I saw this year was an enabled, childish uber-star allowed (and my gosh, at times encouraged) to do whatever he wanted. That’s not “leadership for many years to come” as much as it is a one-way ticket to “I get paid a million bucks to be an assistant for a top-level program.”[1. See: the Jeff Capel files.]

Ford is the king of excuses and that has never been more evident than in the way Marcus Smart acted this season. The entire year was one big “everybody hates us, it’s me against humanity” campaign. That’s not “leadership for years to come” that’s an enabling mindset that approached and subsequently fell off the cliff of public perception.

“It seemed like every call went against us no matter what. When the calls go against you, it’s hard to come back from that.”

The line between “nobody believes in us” and “six billion people hate us” is a fine one and Ford hasn’t figured out how to navigate it.

One of my friends — someone you know from the media, actually — always talks about how teams take on the personality of their coaches. And ours this year was simply a staircase of excuses.[1. Why was I still hearing about how much we missed Michael Cobbins 16 games into the conference schedule?? 16 games!!]

All of that goes back to Ford.

As OKC Dave put it on Saturday after Smart’s quotes about the Gonzaga game came out: “it’s about not allowing your team to have the mindset that it’s OK to blame others for your own failures.”

This isn’t an emotional one-year outburst because our basketball team couldn’t get more than one highlight into One Shining Moment. Really, it’s not.

I haven’t written all year that Ford should be canned because I feel like you should get the full season to prove your staying power. What if I had written this after the seven-game losing streak and Ford had gone to the Final Four? I would look pretty foolish.

No, this is six years worth of frustration that nothing substantial has been built — no foundation for the future has been set. Travis Ford won’t make it to the end of his contract so you might as well fire him now instead of letting him keep the ship barely afloat for another year.

We can talk about replacements later if you want but the excitement level for OSU hoops will be at an all-time low next season. In fact, that’s already started:

I emailed Mike Holder about not renewing my season tickets if Ford returns and he thanked me for my input in less than an hour. #okstate

The opportunity cost of letting Ford stay is that you lose a year (or more) on what could be the resurgence of a once-proud program. Unless you think Travis Ford is the answer to the question “who can lead this team to be, on average, a top four Big 12 team and play to get into the Sweet 16 on an annual basis?” then your answer involves a pink slip and a buyout.

Travis Ford might be a nice guy and he might have a future as a solid basketball coach somewhere but that place will not be Stillwater, Oklahoma and that program will not have “Oklahoma State” on its uniforms.

It’s time for him to go.

By the way: Mike Holder has an email address and he will answer you. You should send this to him.