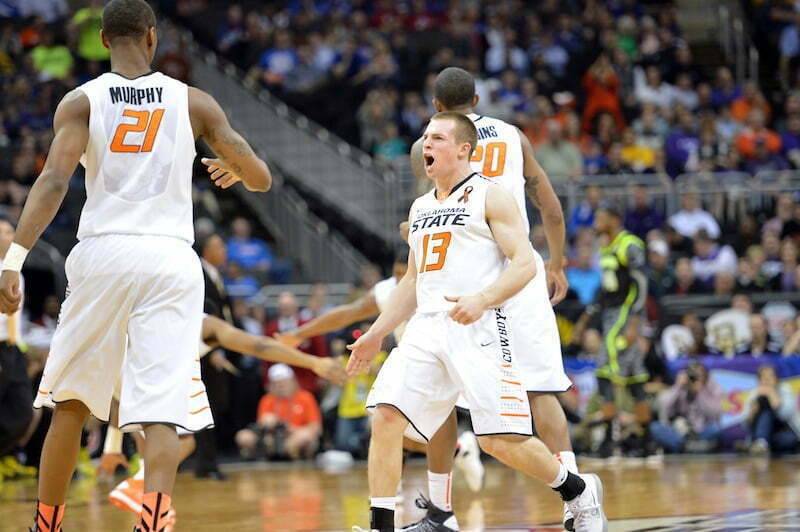 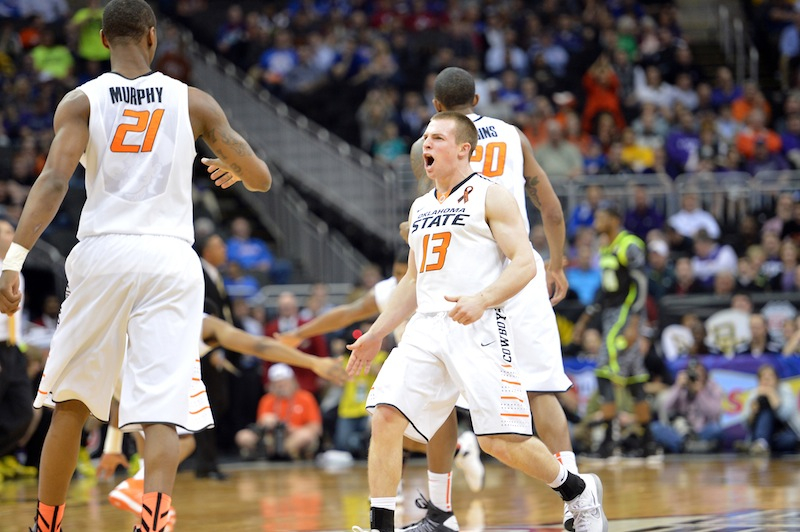 The first thing you must know about me is this: I would rather my team (OSU, Thunder, Federer, Richardson softball — whoever) lose an epic game than win a bad one. I am different in this aspect, I suppose. I appreciate the art of sport over the bloodlust of victory.

My favorite games are triple OT wins — not blowouts. I’ll take an epic loss (Bedlam football last year) over a 40-point win over some crappy squad any day. I love sports, I love games that we still talk about 10 years later, I am not subjectively tied to Oklahoma State at all costs. Maybe that makes you not want to read this blog anymore or maybe it makes you appreciate it more, I don’t know, but it’s who I am.

All that to say, I thought Baylor got royally — like “Kansas thieving Iowa State in Hilton on Big Monday” royally[2. OK, maybe not that bad.] — screwed tonight on that last foul. I just don’t think you can call something ticky-tacky like that in that situation — especially with a tie game[1. I usually judge these things by how pissed I’d be if the roles were reversed.].

Here’s the evidence, you can judge for yourself.

Did Baylor deserve to win? I’m not sure, but I think we should have at least gone to overtime to find out.

1. Why in the [words not suitable for a family-friendly blog] did Travis Ford go away from the halfcourt trap. Scott Drew turns into Mr. Potato Head when he sees any kind of pressure north of the three-point line and I don’t think OSU went to it once in the second half. Why? Who has answers for me? Did anyone ask Ford in his postgame presser?

2. The disparity between the two halves was the biggest I’ve seen from OSU all season. That first half was played at a legitimate Final Four level. Forte canning threes, Smart doing Smart stuff, Markel drilling threes off picks, Cobbins mopping up the messes. I was ecstatic.

Then it just seemed like we remembered “oh yeah, Baylor is good, they’re as good as us, we should let them prove it in the second half.” I thought Smart was incredibly lackadaisical with the ball in the second half and nobody really seemed like they wanted to pull the trigger on Baylor’s season other than Nash. It was really bizarre. Kansas State will run us out of the gym if we try that tomorrow.

3. Pierre Jackson, man, he sure acts like he doesn’t give two craps sometimes when he’s yanking from 28 feet but when he’s feeling it, there’s nobody better in the Big 12. That second half was a total “eff you” to the Big 12 for putting him on the All-Conference second team. I’m sitting here terrified just thinking about what he had in store for overtime.

And while we’re here, he picked up his fourth foul with six minutes left in the game and we just totally went away from challenging him. Part of that was because Nash was feeling it (we’ll get to that) but you get him out of the game and you cruise to the victory.

4. On Baylor’s unis: they honestly looked like some Adidas executive went in his nine-year-old daughter’s room, saw her wacky black and white bedspread and just started dreaming. I mean, how, as an athletic director or coach, do you feel good about throwing your kids on national television in those threads? Brady Heslip looked like he was wearing a zebra costume and going to a Halloween party! Also, the sleeves, were they part of the jersey? Was it all one piece, like a unitard? If Baylor plays Notre Dame in the NIT and they both wear those things, should I worry about my television? So many questions…

5. How about Le’Bryan with a couple of classic second halves in the last two games? He scored — I cannot believe this is real — all of OSU’s field goals in the second half. All of them! All six! He wanted it too (we’ll get to that amazing quote in a second), he legitimately wanted the ball at the end of the game and took it right at whoever was guarding him.

Uber-athletic Deuce Bello? OK, whatever. Go big with Cory Jefferson? OK, I’ll go lefty fadeaway hook on you. He was awesome tonight and OSU would be headed south on a charter bus right now if it wasn’t for his performance.

6. Forte, I mean, what the crap, dude? It’s not like you just hacked Will Spradling on a three pointer that almost brought K-State back from the dead in GIA last Saturday or anything. To do it with under 30 left again, in that situation? And then — I’m not sure if anybody caught this — but he nearly fouled Jackson on the very last three of the game. There would have been a trip to the Apple store for me tomorrow if that had gone down because I would have destroyed my keyboard.

7. The Holly Rowe postgame interviews with Ford and Nash were both jewels. It was fun to watch Ford lie about every single word he was saying when he told Rowe: Baylor is very well coached, Scott Drew does a great job. Then Nash told Rowe: my teammates started giving me the ball as if them not giving him the ball was the issue with OSU’s monster first half. Then he told her that he rise to the clutch at the end of the game. Man.

Baylor playing as if its apparel contract depends on it.

9. Reid Gettys said this on national television: Michael Cobbins has his hand on a lot of balls down there.

10. This just destroyed me.

11. Multiple people mentioned this but Forte should have missed his second free throw with 2.9 left. You’re up one and Baylor probably isn’t going to be able to get much off other than a running shot from halfcourt off a missed free throw. Make the free throw though and they can throw it to halfcourt (which they nearly did) and get a good look at a three (which they did). Ford should know this if half my readers know this.

13. The lady behind the Baylor bench shoving the guy in the sweater is awesome. via @jdubokc (Twitter)

14. I loved how the game was called in the first half — very few fouls, nothing unless it was blatant, just like the Big 8 used to be called. The second half was terrible though. It’s like somebody texted one of the refs at halftime and reminded him “YOU’RE A BIG 12 REFEREE, DO YOUR THING, BRO!”

15. Half the time I feel like somebody just gives the announcers of OSU games a mad lib and has them fill in different adjectives for Smart being smart, Forte having a good work ethic, and them being friends in high school. Does anyone else feel like this?

Today a co-worker told me he thought Smart was overrated

17. Scott Drew putting Brady Heslip (!) on Le’Bryan Nash to start the game after he had five days to prepare for Oklahoma State pretty much tells you everything you need to know about Scott Drew.

18. Am I the only one who thinks Isaiah Austin is a clown? I’m supposed to believe that dude is a lottery pick when his .5 moves can’t outduel Mike Cobbins for 40 minutes? 0-6 from the field for two points and four boards against one of the smaller teams in the Big 12? Okkkk.

While we’re here with Austin, my favorite “probably not everybody saw that” moment of the game was on the MC Slammer dunk in the first half when he got hacked. He came down took a step and went right at Austin, mean mugging him so hard — he might have even pseudo-head-butted him. It was great.

19. My other favorite Reid Gettys quote from the broadcast was him talking about Baylor’s three-point shooting: one for eighteen is under 5%. Come on, Reid, we’re dealing with very divisible numbers here.

20. OSU-Kansas State and Kansas-Iowa State is an awesome semifinals. It’s been a below average year for the Big 12 in general but the next 48 hours have redemption written all over them.