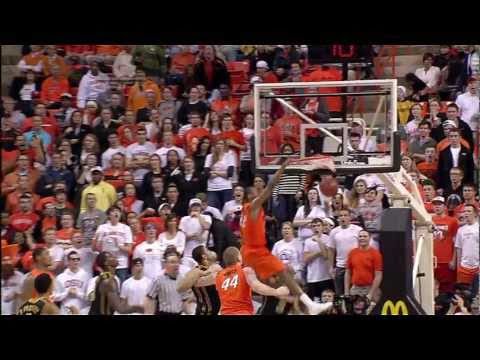 Oklahoma State hung around for much of the game but Baylor’s big men were too much in the end. It’s never fun to lose to Baylor, even more so when it feels like you catch them on kind of an off night (the end of their first half was atrocious) and your guys are going pretty good.

10 more thoughts on the game.

1. Nash really was great today. Even better than what I think we should expect from him. Markel and Forte were a combined 3-19 though. And you can’t miss 11 straight threes (went three-less from 19:30 in the first half to 6:30 in the second half) and expect to win on the road in the Big 12.

And if you’re an OSU fan you can just erase the “miss ten straight threes though (went three-less from 19:30 in the first half to 6:30 in the second half) and…” part of that sentence above.

2. Both of these are true, their court is just hideous [thanks God OSU decided to remove the faded orange/black paint job inside the lanes a few years ago].

Baylor has replaced A&M for the ugliest floor in the #Big12. #okstate

How I know my son is on the right path: he walked into the room and mocked Baylor’s “basketball on the court” design.

3. Does anybody else get annoyed by the overvaluation of great players’ abilities? I know Marcus Smart is great, you don’t have to tell me how spectacularly he keeps his head up, sits down, folds his sweat towel or anything else unrelated to his game. Also Brent, I told Markel Brown you said Marcus Smart was “by far” OSU’s best athlete. He asked me to post this for him.

4. Nothing about Oklahoma State basketball makes me laugh more than Phil Forte’s triple rolled shorts with the white waistband hanging out. It’s the most Phil Forte thing ever. Keiton and Daniel Bobik probably hold an offseason class for this stuff.

5. Loved putting Kirby on Pierre Jackson in the first half. He’s a plus defender and it allowed Marcus Smart to worry about Marcus Smart stuff on offense. Also, it might be a little nonsensical against Baylor (a team Jay Bilas would faint over if he knew how long they were), but I loved our super-tiny lineup of Gardner, Smart, Forte, Nash, and Murphy.

6. CAN I GET BAYLOR’S CLOCK OPERATOR/SCOREKEEPER TO TAKE A CLASS FROM LEE MANZER?!

8. How many times did Brent, Fran, and Holly say the word “blow.” They used it in every possible way you can feasibly use the word within the confines of the english language. At one point Fran said “six minutes of blow.” I have no idea what “six minutes of blow” means but I’m going to guess DeMarcus Cousins is probably involved.

9. Amilian said this in the first half and I think I agree with it: the closer we get to the basket the less we look like we know what to do with the ball. Big men fumbling entry passes, guards dribbling breakaways off their feet — sometimes it seems like we’re better off running the Keiton Page memorial “shoot from wherever the F you want to” offense with Forte. I know we’re not…but sheesh.

10. ESPN opened with a shot of Baylor’s cheerleaders and Brent Musburger’s voice. It’s just…it was way too easy.

WVU at home on Saturday.