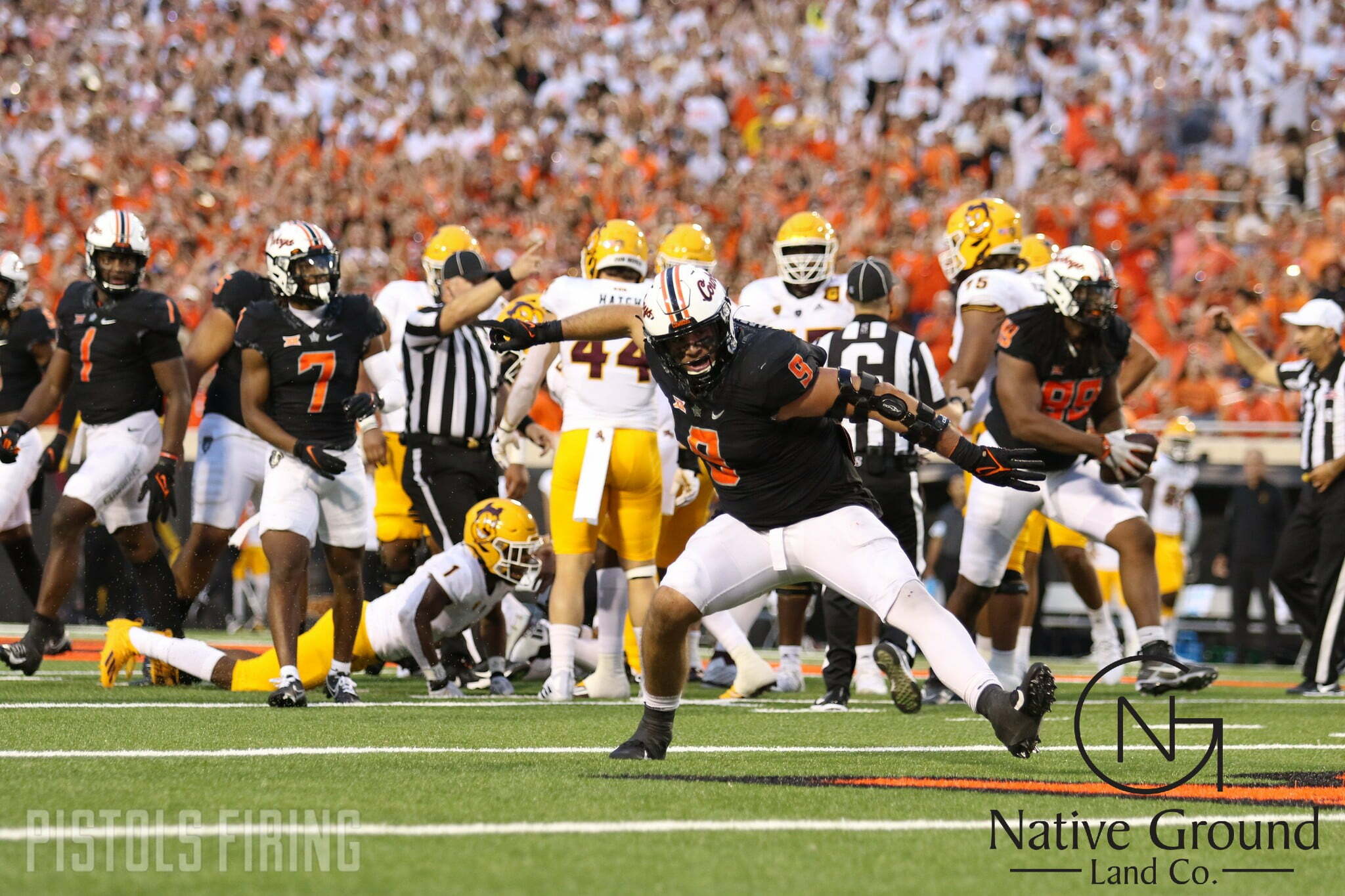 Oklahoma State defeated Arizona State 34-17 on Saturday, pushing the Cowboys to 2-0. Here are 10 thoughts on the game.

Last week things were close between OSU and Central Michigan until the Cowboy defense forced a safety and OSU went on a 30-0 run. This week the spark came when Brock Martin cut a man in half.

On 3rd-and-1, Xazavian Valladay took a handoff, but before he could say “Sparky,” Martin folded him up at the waist. The ball popped out, Tyler Lacy fell on it and the Cowboys were rolling.

Down 3-0, OSU ripped out three straight scoring drives to take a 17-3 lead into the half.

2. The Defense Settled Down

After giving up 44 points to the Chippewas in Week 1, the Cowboys’ defense didn’t enter Saturday’s game with a ton of slack from the OSU fanbase. Then the Sun Devils gained 109 yards in their first two possessions.

One of the Cowboys’ most impressive stats under Jim Knowles was third-down defense. The Cowboys were great in that area Saturday, holding to Sun Devils to 2-for-13 on the money down.

There was still the occasional defensive breakdown — like the 73-yard seam pass to start the third quarter or the 20-yard completion on 3rd-and-18 at the end of the third. There are still some kinks to be worked out, particularly in the secondary, but it was a step in the right direction.

“The biggest improvement — points, right?” Mason said. “Gave up less points. We need to be better. … I thought our guys just played a cleaner ballgame tonight. It wasn’t as clean as any of us would like, but here’s the deal, there’s always tomorrow. So we’re gonna look at the film and get back to the lab and make sure when we come out next week we try to play a cleaner ballgame.”

Tyler Lacy had it all — the size, the length, the push on the line of scrimmage — but his sack numbers left some things to be desired over his first three seasons. He hasn’t had more than four sacks in a season to this point. Well, through two games in 2022, Lacy has two sacks.

I wrote last week about how Lacy was quietly dominant against Central Michigan. Well, it might not be so quiet this season. If he can be a force in the pass rush like he has been, his potential (and his draft stock) raise significantly. He finished Saturday’s game with five tackles (most among defensive linemen), two tackles for loss and the sack.

How did Spencer Sanders respond after going scorched earth last week? He had another solid game.

The numbers don’t pop off the page nearly as much as they did last week, but he was 21-for-38 (55%) with 268 passing yards, 54 rushing yards and three total touchdowns. He did have his first interception of the season, but it’s silly to think he’d throw a perfect game all season. For the most part, he seemed to make good reads, make good throws, and he still ran like a gazelle.

If this can be the average, the Cowboys are in a good spot.

He got in a bit of a scuffle after a Sun Devil defender got a roughing the passer penalty on Spencer Sanders. On the next play, Brooks got an unsportsmanlike conduct penalty called on him, and he got yanked with starter Jake Springfield returning.

Brooks went back out the next series but got pulled again after a holding call.

Two things Mike Gundy doesn’t stand for: running backs who fumble and literally anyone who commits a penalty. We shall see when his next shot comes.

“He’ll be fine, and we need him to continue to get better,” Gundy said. “I’m gonna guess just off the cuff without looking, we need to play him more. But when they lose their emotions, we have a tendency to not put a guy in because you can’t really help us because you can’t think. If you can’t think, it’s really hard to play and that’s anybody on our team.”

6. Have a Day, Bryson Green

Exhibit 913 of Kasey Dunn’s embarrassment of riches: Bryson Green had a great game.

Last week, it was about Braydon Johnson and John Paul Richardson. Much of the offseason was about Jaden Bray and Brennan Presley. Welp, Green, starting for an injured Bray, had five catches for 83 yards and a touchdown (his second TD of the season). It was particularly important Green had a good game because Johnson had a few crucial drops.

Green’s touchdown Saturday was about as easy as it gets, coming off a flea flicker, but they all count.

7. Dominic Richardson Gets to Stretch the Legs

Sanders didn’t hand the ball off a whole lot against Central Michigan, so it was tough to have any big takeaways about the run game. That wasn’t the case Saturday.

After toting the rock only nine times against the Chippewas, Dominic Richardson had 27 carries for 131 yards and a touchdown against ASU. He went to the locker room a little early before halftime with an injury, but he came back out and played the second half, running for 58 yards. After the game, Richardson said it was his decision whether he returned or not, and he is feeling fine.

He was also used quite a bit in the passing game, catching five passes for 44 yards.

It was a much more memorable game for the Cowboys’ new bell cow back in Week 2.

“It was great, man,” Richardson said. “I knew it was gonna come. I was expecting it this game. It was gonna be a running game this game.”

It appears Ollie Gordon has taken over RB2 duties only two games into his true freshman season.

After getting only two carries in Week 1 to Jaden Nixon’s five, Gordon had three carries (to Nixon’s one) for nine yards against the Sun Devils, and Gordon had a 14-yard touchdown reception, his first touchdown at the college level.

Penalties, special teams and turnovers are three things Gundy preaches at nauseum. Those bit the Sun Devils on Saturday.

Particularly the penalties. Arizona State had 10 for 95 yards, 26 yards more than the Cowboys gave up. Special teams also went in the Cowboys’ favor after ASU punter Eddie Czaplicki shanked an 18-yarder into the stands during the Cowboys 17-0 run in the first half. And Carter Brown missed a first-half field goal to Tanner Brown’s two makes for OSU.

It wasn’t quite Iowa ball, but the Cowboys playing cleaner with the officials and in the kicking game played a part in the win.

It didn’t matter how OSU won this game, just that they won is a big deal. Or as Arizona State coach Herm Edwards once said: “You play to win the game.”

Was this the prettiest game the Cowboys have ever played? No. But when you look around the county, there are plenty of fanbases who would’ve taken what the Pokes managed Saturday.