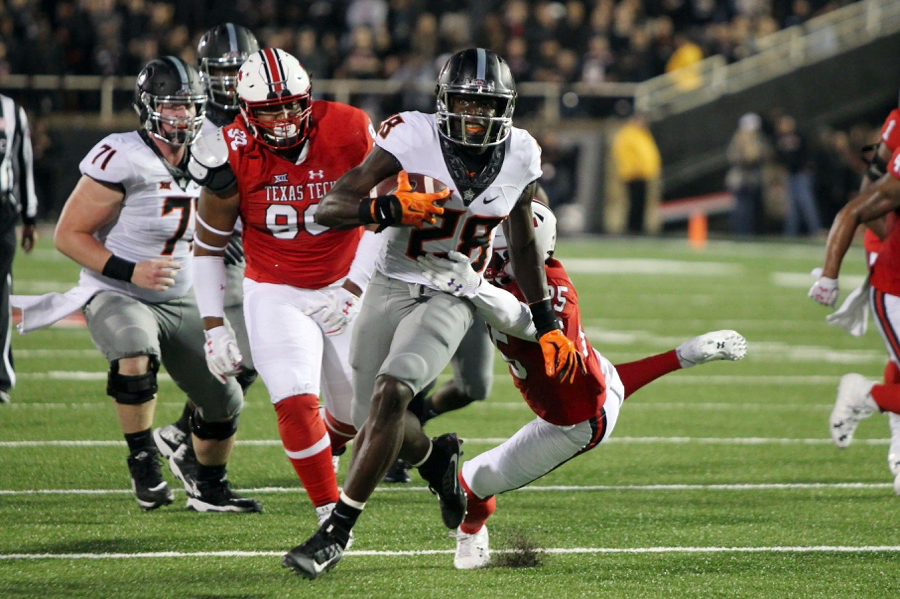 Somehow Oklahoma State managed to make me think it both deserved to lose to Texas Tech and should have won by 25 tonight. The Pokes won a thriller (albeit not a great game) at the end when Mason Rudolph did his best J.W. impression and tucked it for six and OSU’s ninth-straight over Tech.

Rudolph ended the night 27/38 for 376 yards and 3 TDs through the air plus another 50 yards rushing and 2 TDs on the ground. James Washington did his usual thing against the Red Raiders with 9 catches fro 127 yards and a TD. And Justice Hill put up a career-high 164 yards on a career-high 30 carries and had a receiving TD.

The Oklahoma State defense held Tech to three TDs on 12 drives (including two in the last nine) and got turnovers and stops when it needed to at the end.  It wasn’t fun to watch (and OSU failed to cover for the second-consecutive week), but Big 12 road wins are Big 12 road wins, and 4-1 is about 10,000x better than 3-2 going into the bye week.

1. Middle of the Field

Rudolph was kind of lousy in the third quarter and into the fourth, but those last two drives were Big Daddy™ stuff. This throw to James Washington alone (even though the drive ended in a missed FG) was worth the price of admission.

Have mercy, that throw. pic.twitter.com/AiRcOaRig8

I thought Oklahoma State did a much better job of using the middle of the field than it did against TCU. It felt like against TCU it either ran 77-yard or 2-yard patterns. Rudolph hit The Prez and Jalen McCleskey over the middle several times on Saturday evening.

Those yelping about Rudolph not being elite, trust me, I hear you. And I admit that in the middle of the third I was writing my “I was wrong about Rudolph” magnum opus. But then he went 7/10 in the fourth quarter, posted his 17th 300-yard game, ran in the game-winner and moved his record as a starter in Stillwater to 26-7.

OSU turned to him later, and he (and Marcell Ateman) delivered. Was he great throughout? No, no he was not. He danced too much, was in-ack-rut and made a few bad decisions. But like he’s done his whole career, he came away with the W at the end.

Hill had a career-high 164 yards on a career-high 30 carries, and I love how OSU is using him as a pass-catcher out of the backfield. I’d like to see a little more J.D. King, but those cutbacks from Justice deep on a college football Saturday night will never not make me weak.

As an aside: I thought Yurcich called a really good game. The Mason running plays, while not great for Mason’s insurer and OSU fans, were money.

3. Texas Tech offense … not that good?

I don’t know what to do here. Was Oklahoma State’s offense better on Saturday than it was against TCU? Yes it was. But Nic Shimonek might not be as good as Kenny Trill, and Tech was without its best WR for most of the second half.

Surprisingly, I think Tech’s defense is actually somewhat decent, but not good enough to hold Oklahoma State to 41 points. This was the frustrating part to me. Tech had the look of a team begging to get baptized into Big 12 play, and OSU let them hang.

Wouldn't have expected #OKState to hold Tech to 1 offensive TD in first 3 quarters. Would have expected a bigger lead in that case, though.

And if you let Tech hang, Kliff is going to flip to the “fortune favors the bold” page in his playbook, and all hell is going to break loose (which it nearly did). If Tech wasn’t trying to be a homeless man’s 2009 Texas on offense and defense, OSU wouldn’t be 4-1 right now.

Does, uh, Oklahoma State need to hire a special teams coach? I know that doesn’t solve the kicking problem (I literally typed “I would be more comfortable with Ammendola kicking from 75 than 20” on OSU’s last drive), but the Cowboys just seem to be out of sorts on special teams a lot.

Flip it around, though, and getting the punt block in the third quarter was massive (or it should have been — more on this in a minute). Gundy preaches special teams and turnovers, and that’s what flipped the game (both ways) about four different times on Saturday.

5. Strength of DL is in the middle

Oklahoma State got eight QB hurries, six tackles for loss and a sack on Saturday, and /whispers faintly so Jordan Brailford and Cole Walterscheid don’t hear … the interior of the line is better than the defensive ends right now. Between The Blizzard, Sugar Loaf Daniels and Taaj Bakari, Oklahoma State looked really strong at times up the middle. The pass rush from the outside was better, too, but the interior is where the bags are earned (maybe not the best week for that analogy).

We already talked about how Mason was subpar at times. Part of that seems to be him holding on to the ball too much, and part of it seems to be a protection thing. He seems a tad jumpy in the pocket, too, which is both.

Watch this play. Justice semi-whiffs on the block and Rudolph starts hopping around. He has The Prez more wide open than he’s been since he was in 6th grade, but he never sees him. That’s the kind of thing that needs to get fixed by the time Texas and OU come calling, or those games could get ugly in a hurry.

Our own Kyle Cox came up with a stat he calls PPR which is points per time you reach the red zone. OSU came in averaging 4.6 PPR, which was middle of the pack in the league. On Saturday it scored just 3.6 (we don’t include PATs) against one of the worst teams at defending the red zone in the entire league.

OSU got into the red zone on 10 (!) of its 12 drives (and its last drive was a kneel to end the game). The grand total from those red zone trips?

That number should be (at least) 5.0. To undescore all of this, the score was tied at 7 at the end of the first quarter even though OSU had three red zone trips and Tech had just one trip past its own 35.

I got a text from a buddy tonight: “Remember that Ateman catch when OSU beats OU twice and gets into the CFP.” Don’t worry, I will. I told Carson before the season started that Ateman was Rudolph’s “I have to have this third down conversion” dude, and he proved it on Saturday. Facing 3rd and 5 (and the season), Rudolph threw one up to No. 3 who made one of the most grown-ass man plays I’ve ever seen an OSU receiver make. Game-changer and possibly trajectory-changer.

How about this stat Hayden Barber uncovered earlier this week. Oklahoma State is now 9-0 in the last two seasons when it scores on its first drive and 5-4 when it doesn’t. Rudolph has talked about how much they value scoring first. They did (with ease) on Saturday, and it paid off (four painful hours later).

Oklahoma State had the ball on its own 25 with 9:56 left and the scored tied at 34 on Saturday. It had 75 yards and all of its dreams for the 2017 season in front of it. I felt the same way I felt before the Texas game last year. If you somehow pull this off, you can get some momentum and think about running the table. If not, then it’s 3-2 and a mini-disaster to start the year.

The Cowboys ran 17 plays over the next two drives, and Tech ran 11. Tech got one “stop” on a doinked FG. OSU got two stops when it most desperately needed them (the Raiders were 5/12 on third down by the way).

Does that guarantee Oklahoma State will roll all the way to Bedlam without a loss? No, there is (obviously) a lot of work to do. But it at least makes it possible. With everything — onside kicks, Gus, their own special teams play, pick-6s — going the other way as it neared midnight on the plains, OSU gutted out a win as hideous as Mike Gundy’s mane after a day at the lake.

There is much more to discuss, but for now there is a W to savor.