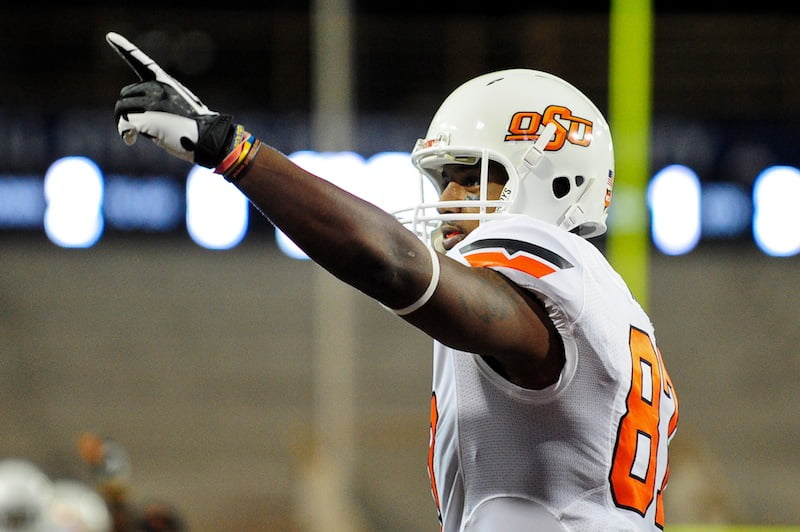 Well that did not go as planned.

1. Certainly when your rush yards and penalty yards are similar (and you rushed for 196 yards) that’s not a good thing[1. While you were reading that sentence Calvin Barnett picked up a personal foul and got fined for littering twice.].

One person on Twitter said this was as undisciplined as he’s ever seen a Gundy team play and I agree. It’s weird too, you’d expect that in 2006 or 2008 but it feels like we’ve progressed enough as a program that discipline issues wouldn’t be your main focus going into week three. Yet here we are.

2. The wide receiver drops reminded me of the Missouri game last year. I don’t know if we have a receiver that DIDN’T drop a ball tonight. And the thing that mad it worse is that Lunt was on point over and over again. “Dropping dimes” as one Twitter follower put it.

Even the triple coverage flea flicker that the Pac-12 announcers nearly broke down over hit Tracy Moore in the hands.

3. Kevin Calabro[2. I bet Ryan Lochte wishes this was his last name: “yeah good to meet you, my name’s Ryan Cala-BROOOO”] said “157 penalty yards ought to take your breath away if you’re a coaching staff.” That’s a direct quote, no elaboration. I would think it would make you want to take your players’ breath away, but maybe that’s just me.

4. Wes Lunt (and his stat line[3. 37-60 for 436 yards 4 TD and 3 INT]) were tremendous tonight. I know the three picks looks bad but one was on Tracy Moore for falling down and one was Josh Stewart basically handing one of Arizona’s DBs the ball. The other one, the pick six, was bad[4. It was like the most freshman pick ever (on the road, under duress, falling away, pick six…there’s not a QB alive who didn’t throw that pick his freshman year)].

But he was everything you needed him to be and more, if anything I felt like the hyped talk of his composure was maybe even underrated. The most flustered I saw him all night was maybe a clap of the hands that lasted .8 seconds. Color me impressed.

5. My dad texted me in the middle of the fourth quarter: “the worst part about all of this…is Herbstreit calling it.” Blind squirrels, nuts, etc. When you put a team on upset alert literally every week, at some point you have to be correct, no? Did he have us on upset alert against Savannah State or did Fowler talk him out of it?

6. The dirtiest little secret about tonight? Justin Gilbert and Brodrick Brown got housed all night. Matt Scott threw for 320 and 2 and it was extremely easy.

7. The unintentional comedy on the Pac-12 production of this game was off the charts tonight. CalaBRO thought Tracy Moore’s third TD was an incompletion for a good 10 seconds. Quinn Sharp was lining up for the extra point before he realized it was caught. Then the studio guys kept saying “we” during halftime highlights like they were either 1.) coaches of the Pac-12 teams playing or 2.) Brian Davis and Grant Long.

THEN Rick Neuheisel called us Oregon State, the Big 10 champs, and compared Tracy Moore to Dez Bryant and Justin Blackmon in his post game. Unprecedented stuff all the way around.

8. The lack of leadership tonight was pretty stunning. I talked about this a little bit here but my biggest question about this year’s team wasn’t talent or how Lunt would perform but whether or not this team would compete together as well as they did last year.

Who would put the offense on his back like Weeden did last year? Who would pick the D up like Markelle Martin and Jamie Blatnick? Still a ton of time but tonight was not promising.

9. Cox has to be feeling pretty good right now, eh?

10. I think the toughest part of the loss tonight for me was the realization that if we really are a top 15 program then we go on the road and take care of business against a team like that. I’m not saying we should be going 10-2 or anything crazy like that but top 15 squads (Oregon, Va Tech, etc.) don’t go out and slop around like OSU did tonight.

It’s just not a part of their DNA. I understand this year’s team is not last year’s team but that doesn’t mean we should revert to what we did tonight.