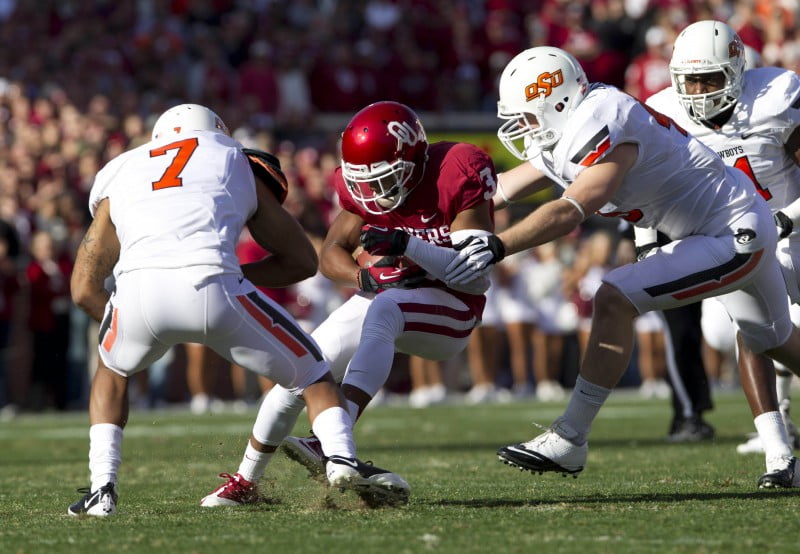 What else do you want from rivalry weekend[1. Besides a W.]?

I thought 2004 was the best Bedlam game of my lifetime[2. That I remember, three-year-old me doesn’t recall 1988.] but tonight topped that and then some.

You might get 100 of them this weekend, but here are my first 10 thoughts about tonight’s instant classic.

1. How long was OU’s last drive of regulation in reality? Because it felt like it lasted seven and a half hours on a 250-yard field. Seriously, that whole drive I felt like I was operating in some sort of alternate reality where playclocks read 45 minutes and slo-motion is the norm. If we ever find any OSU fans repping Al-Qaeda replaying that drive will be way more effective than waterboarding. Just something to file away.

3. Speaking of Monken, you could tell he wanted to run it down their throat all night. And really, that’s the misnomer about OSU’s offense, that’s what we’re trying to do. The passing stuff is all done to set up an open midfield for Joe Randle, Jeremy Smith, and (apparently) Clint Chelf (!) to run through. 4.9 yards per carry tells that story.

4. I’ve watched Caleb Lavey’s dive at the shoelaces of Blake Bell about 18 times now and it’s more painful every time. He had him stopped two yards behind the line of scrimmage and Brodrick Brown had him stood up on the one. Too much dozer though. It kills me to type those words.

5. I tweeted this earlier but some of you might have missed it. To the OU dude who hangs off the back of the Sooner Schooner[3. Has Lou Holtz ever tried to pronounce Sooner Schooner btw? Would be an all-timer.] — you are the bro-est of all the bros in Oklahoma. You win all the deep v-necks.

6. Chelf wasn’t perfect, but he was certainly good enough to win. 19/37 for 253 and a touch, 63 rush yards, 36 receiving (!) yards. He did everything you needed him to do to win. Although a first down or two on OSU’s last drive would have been nice…

7. OU has led zero of the last 120 minutes of Bedlam football. Incredible.

8. Underrated: Oklahoma State’s red zone defense tonight. Coming in to the game OU had 52 trips to the red zone, 38 TD, 10 FG, and four non-scores (5.69 points per trip). Tonight they scored 34 points in eight trips (4.25 points per trip). Not including overtime.

9. I’m worried about Waco next weekend. You can’t empty the tank like that and expect to just roll through a really good offensive team like Baylor. In Gundy we trust, but I’ll be stunned if OSU has an easy time with the Bears.

10. If an alien landed on earth today and immediately wanted to know what college football was all about, what took place in Norman, OK tonight would have pretty much summed it up for him.

A rivalry in the midst of its best years ever, a desperate-to-defend-its-Big-12-title O-State squad leaving the chamber with no bullets, a OU team with BCS aspirations riding its dual-QB system to the ground.

Traditional unis donned on both sides of the field.

The first overtime in Bedlam history.

It was strangely, almost hauntingly one of the most beautiful things I’ve ever watched.

Back at it tomorrow on the blog. Thanks so much for reading.