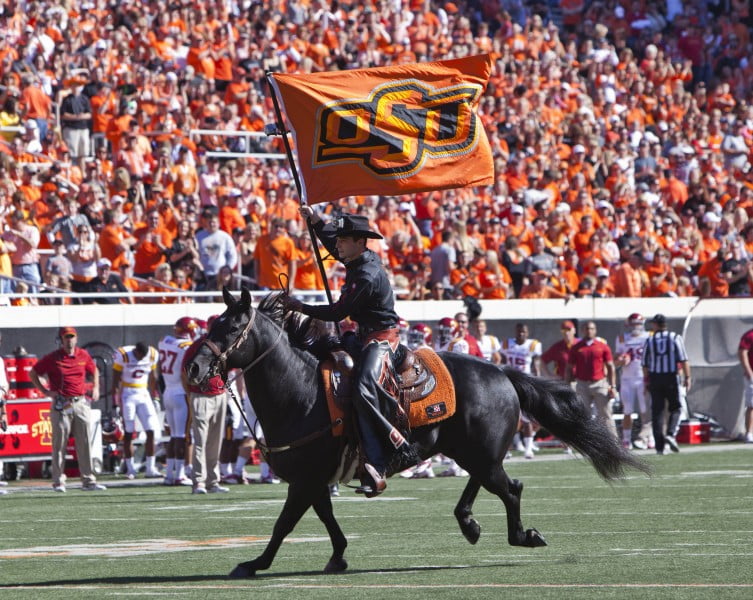 1. I don’t understand J.W. Walsh, he defies my ability to process and comprehend the game of football or the quarterback position. He always seems like he’s a pick six from transferring to Lamar and yet he goes out today and posts the 7th best passing day in OSU history[1. With 46 rushing yards and a rushing TD to boot.].

There’s still not a quarterback controversy [2. The real controversy now is whether or not to redshirt Lunt] but he played an awfully good game today against a great Iowa State defense.

2. The uniforms were awful. I know everybody thinks it’s cool that we do the all orange thing or whatever but I’m not even sure the color of the helmets matched the color of the jerseys and pants and the logo was the size of an acorn.

The orange looks a lot sharper when it’s only on one piece or even accenting everything like in Tuscon.

3. I tweeted it like 10 times but I think we’ve found Quinn Sharp’s kryptonite: field goals against Iowa State. He’s one for his last four against them.

4. Props to Monken for going with and staying with the pass. Iowa State was all in against the run and Monken put his trust in Walsh on the line in the 2nd/3rd quarters. Only Weeden, Robinson, Lunt, and Pogi have ever thrown more passes in a game than Walsh did today (47).

5. Charlie Moore set the white guy receiving yards in a single game record[3. In the Gundy era.] today with 129. Previous high was Cooper’s 128 against Iowa State last year. This seems important for some reason.

6. Why does Wes Lunt even dress out? Is he the backup? 3rd string? What are we doing with him right now. It seems like he’s either going to play or not play and if he’s able to play but the coaches are just choosing to go with Walsh then why don’t we just redshirt him?

8. Has anyone ever regressed more from one season to the next than Justin Gilbert? Dana is watching tape of him late at night in his hotel room housing Red Bulls, smiling, laughing, drawing up plays.

9. How many weeks in a row is Jeremy Smith only going to play one play?

10. Really good win for OSU today. Chris Williams mentioned in our preview that Iowa State hasn’t given up over 30 points in regulation in 12 games and OSU really could have had 40+ today. Plus today is a turning point of sorts, now you can use the TCU game as a springboard back into the upper portion of the conference as you head into that KSU-WVU-Tech-OU stretch.

Much more to come throughout the weekend.