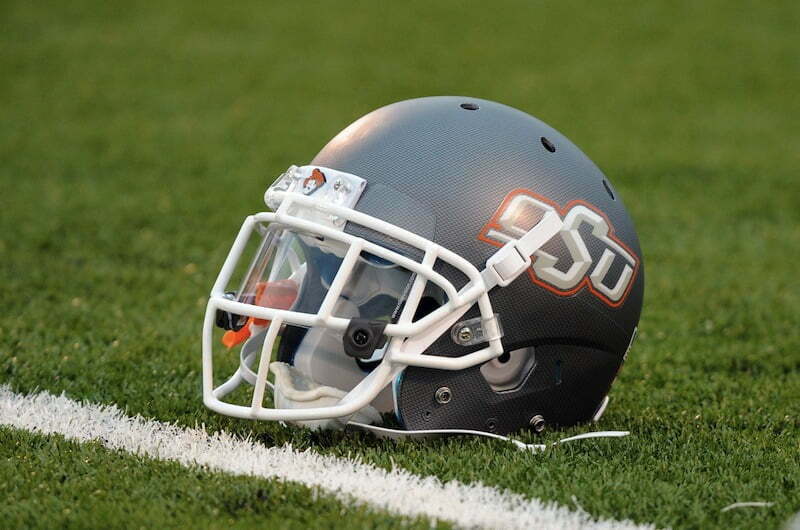 Hold on, give me a second. [puts down brown paper bag with 99% CO2 in it, fans self with OSU baseball hat, looks at rest of schedule, cries, comes back to computer] OK I’m back, let’s get to the 10 thoughts.

1. That was less than fun. Kansas has won two Big 12 games since 2008. Two. And OSU tried to make itself number three today. I don’t care if you have Alex Cate behind center, to come within six of Kansas with the running game you have and this supposed turnover-creating machine (more on that shortly) is an embarrassment.

2. OSU has now created four turnovers in five games and has a -5 differential in the turnover department. I was wavering between “it’ll return to the mean” and “we’re just not very good” this week but I think I was given my answer.

5. One of the few positives of today was the improvement of the gray helmets. We went from G.I. Joe/Lego helmets to something straight of the Oregon uniform catalog. Like I said on Twitter, if I was giving these a harder thumbs up you’d be calling me Phil Mickelson.

6. I don’t know who specifically was the problem but the playcalling/pass routes were horrendous. Walsh was trying to heave throws across the long side of the field and we got Randle into open space about as much as we got me into open space.

Part of me blames Monken (because of how much better the plan was against Texas) but maybe it’s partly Walsh’s fault? Either way, whatever was left of the absurd “do we have a QB controversy?!” question was buried and eulogized in Lawrence today. Lunt will be back for Homecoming next week.

7. Was this the first time a channel has ever put our team’s name in black on the top graphic? I thought that was so odd, like we were the Raiders or something.

9. We like to giggle and chuckle about Quinn Sharp being our most valuable player but today he honestly was. 4/5 touchbacks, 2/3 field goals, 5 punts with an average of 54 yards, a potential-TD-saving tackle on a kick return, and exacerbating the last roughing the kicker penalty which sealed the game. Sharp4Groza.

10. How hurt is this team right now? Walsh was throwing outs to Austin Hays during huge drives late in the 4th quarter. My unofficial count on injuries was Brodrick Brown, Tracy Moore, Caleb Lavey (though he looked fine), and Isaiah Anderson who apparently hurt his fingers which is crazy because nothing ever touches them.

Also, Lunt and David Glidden didn’t play which meant we were back to the Barnum and Bailey’s stuff on punt returns.

[takes deep breath, remembers OSU is one of only three teams in the Big 12 that still fully controls its own destiny]

More coverage coming throughout the weekend.