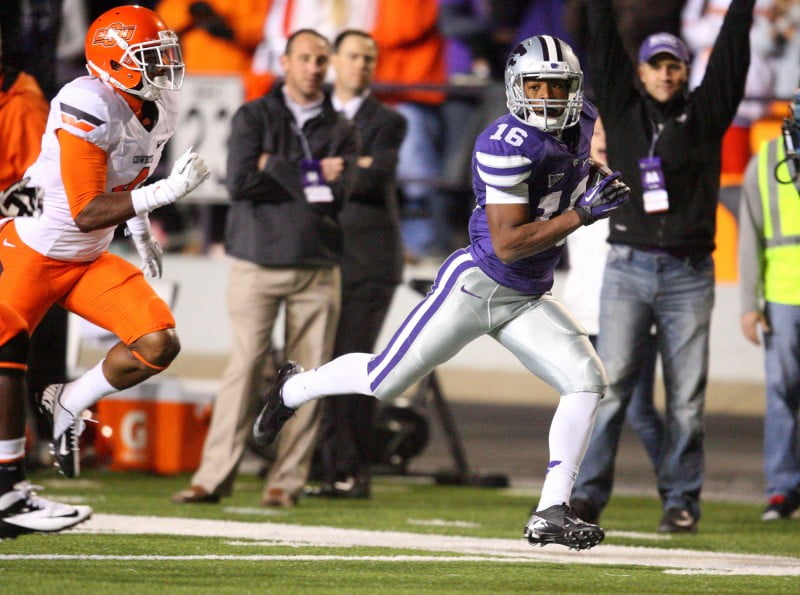 Well we have a lot to sort through…

1. The defense was terrific again tonight. Remove the kick return and pick six and they held a team averaging 45 to 30, knocked Klein out of the game, and held them below their average yards per play on the season. The offense gave them little to work with.

2. I’m going to write about this more in-depth later on but obviously Lunt was a huge reason OSU lost tonight. You can’t turn it over five (!) times to Kansas State (five!) and expect anything better than what happened. Really the fact that OSU even came within two touchdowns was pretty miraculous as it was[1. Another hat tip to the defense.]. I’m still all in on #11 but I think questions have at least been raised — both about his performance and his ability to stay healthy (but like I said, much more on this later on in the week).

3. I had a Fisher-Price joke queued up for my writeup when Carson tweeted this pic of the helmets but they actually looked a lot better on TV. I personally think there’s more work to do here (take a visit to Beaverton, Oregon perhaps?) but we’re moving in the right direction.

4. Brent and Herbie. I mean we almost had to go TV-MA in the second half because of how close they got to having a nationally televised orgasm over the Bama-LSU game. I don’t dislike those guys[2. My Twitter feed tells you differently, I know] but I didn’t feel like they way they conducted the last 30 minutes of our game was very professional at all.

6. LSU-Bama got Wright Thompson for its intro video work, and from the sound of it I think OSU-KSU got somebody off the street…

7. Snyder is a psychopath. I know he projects this old man nice grandpa image thing but if you give the man a two score lead he’ll bleed you out until you’re crying for the game to just end.

8. Clint Chelf, my man. All the coeds for you tonight. Not only does OSU have the best QB2 in the country, it has the best QB3 as well. How much money would Randy Edsall pay for Chelf to transfer to Maryland right now? $500K? More?

9. Back to Brent and Herbs real quick — how about the way they talked about Klein not playing the last quarter and a half? Brent acted like Snyder was just sitting him because he’d gotten his work in against and KSU was just going to run the game out — like they were playing Northern Iowa or something. It was a three possession game with the #1 offense in the country on the other side of the field!

Then they acted like the assistant coaches were playing a game of hide and seek with his helmet. He had a head/neck injury! Where was Jeannine Edwards and why was nobody talking about this?! You’re better than that, ABC[3. I think….].

10. This is about what I expected tonight with two slight differences. 1) I expected OSU to take better care of the ball — five turnovers is a joke. 2) I expected more out of Kansas State’s offense. They weren’t explosive and never made you feel like they were going to do anything you couldn’t recover from. I guess that’s kind of the point with Snyder though.

Back with much more on the game tomorrow.

Oh, and don’t forget to fall back (like the OSU offense!) tonight…