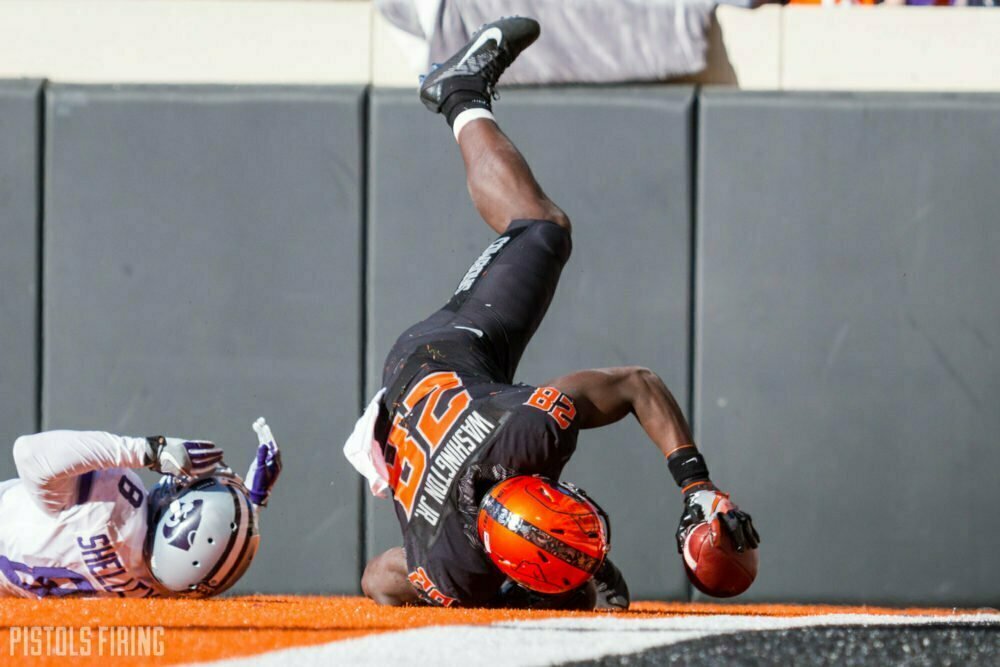 My three-year-old son said it best at halftime. He knows exactly one player (Rudolph), doesn’t really understand how the game works and calls the teams by their jersey colors instead of their names. And yet … he knew.

“This white team is really good at catching the ball and making the touchdowns.”

Oklahoma State got trotted out of the building early on Saturday before nearly snagging yet another victory from the jaws of defeat late. I think it was the worst loss of the Mason Rudolph era and maybe even the worst of the Mike Gundy era.

A nine-drive TD drought in the middle of the game sunk the Pokes, even though Mason Rudolph, Justice Hill and James Washington eventually got their numbers. Rudolph finished 32 for 53 for 425 yards and 3 TD. Hill had 91 yards on 23 carries and a TD. Washington had 8 catches for 159 yards and 2 TD.

But Skylar Thompson and Byron Pringle lit the Cowboy defense on fire. Thompson threw for 204 yards on just 13 passes in his second career start and Pringle had a career high (that I don’t even have to look up) 166 yards, 3 TDs and another kickoff return TD. Thompson ran for 93 more on the ground, and the Wildcats out-gained the Pokes per play 6.8 to 6.1. In the words of our sitting president … Not good!

Here are 10 thoughts. Proceed at your own risk.

1. Kansas State’s offense is not great

I have often been a defender of Glenn Spencer in his tenure as the Oklahoma State defensive coordinator. OSU has had a top 3/4 defense in the five years he’s been at the helm, but the last three outings for his unit (and specifically the last two) have been horrific. Some of that is on the players. They looked disinterested early at Iowa State and for the entire game on Saturday against Kansas State. But you can’t get rid of players, and players aren’t responsible for bringing in new ones.

Kansas State came into the game ranked No. 54 in points per drive on offense, and Oklahoma State made them look like 2013 Florida State! Thomas Fleming and Adam Lunt will do a better job of breaking down what specifically went badly next week, I’m sure, but all I know is that KSU posted a 2.53 PPD number on Saturday (above its season average) and wasn’t even trying on the last 3-4 drives!

That should not be happening on a Big 12 title contender at home, especially through the air by an offense that hates the forward pass more than Walt Garrison.

I was wrong, though. OSU was out of juice on Saturday, and looking back on it, the entire week felt odd. We were more interested in the TCU-Texas Tech game, and the vibe at BPS was just kind of weird. Maybe that’s what happens when you know your Big 12 title dreams are probably shot and the OU game is already behind you, but Oklahoma State was clearly disinterested in playing this game after an emotional last few weeks against WVU, OU and Iowa State.

Does this go back to not having horses like we talked about in 2015? Maybe, but the problem seems to have less to do with top-tier talent and maybe more to do with depth and managing the rhythm of your season (i.e. not being able to close late in years). I don’t know what the specific end-of-season issue is, but Oklahoma State is 1-4 in the last two games of its seasons in the last three years. Hopefully (hopefully!) that goes to 2-4 next week and not 1-5.

After 12 runs of 10+ yards against Oklahoma and Iowa State, Justice Hill had only one such run on Saturday against the Wildcats. He came into this game with 206 carries on the season which is the exact number he had last season as well. So technically we’re in uncharted territory with his workload. Maybe it’s a fatigue issue. Maybe it was an offensive line issue. Whatever the case, he didn’t seem quite as explosive as he’s been in the last few outings.

Even though Hill is close to 100 yards rushing today, the K-State run fits have been great. Not a lot of open space out there for him.

Rudolph has had some very misleading games against Kansas State. The numbers? They’re there. But if you watched, he has not been very good in these games. In 2015, he missed 21 of his 55 throws. In 2016, he threw two really poor interceptions. This year, a little of both.

At one point on Saturday, Rudolph was 16 for 32 for 169 yards a TD and two picks. And I’m not sure that begins to describe just how ugly it was. It was the full Bad Mason Experience, but this time (unlike a lot of other times) the overthrows turned into picks. As our Xs and Os guy Thomas pointed out during the game, Kansas State knows he ignores his check downs often so they backed up and feasted. He largely corrected that late, but it wasn’t enough.

All that being said, I’m sure going to miss this after the next two games. Two all-timers in Stillwater, and Washington probably locked up the Biletnikoff with his 159-yard, 2-TD performance.

You knew it would bite them at some point, and I’m not sure why we didn’t think “some point” would come against a team that has scored 45 kick and punt return TDs since 2005 (15 more than any other team in that span).

And there’s your game. I know it’s not nearly that simple, but even great teams need to be elite when it comes to the details to win 10+ games. OSU hasn’t been all season, and now they’re not going to reach 10 wins because of it.

He has to be either exhausted or injured, right? Green has looked like a star all season, and he got abused by somebody with fewer receiving yards this year than Jalen McCleskey. Abused! Byron Pringle beat Oklahoma State’s secondary about every way you could possibly beat them. It got so bad that he scored one of his TDs without a shoe on. Abuse!

I’m a big believer in No. 4 going forward, but this was not his finest game. Also, it’s the last time I ever pick Oklahoma State to rout a Bill Snyder-coached team. Ever. Kansas State could leave its football team at home and roll out a group of nine media members that have to play both ways against Oklahoma State short-handed, and I would not believe that the Cowboys could blow them out. Here are the scoring margins of the last 11 KSU-OSU games.

That’s an average of 8.4 with a 34-pointer in there. Astonishing.

You should have seen our Slack chat during the 4th quarter. I’ve seen less frantic mass invasions of foreign countries. To recap: OSU trailed 42-13 with 20 minutes left in the game. Then it went 272 yards on 27 plays and scored four times in the next 16 minutes. Incredibly, OSU gained just 238 yards on its other 57 plays compared to the 272 in that burst of madness.

It would, in a lot of ways, have been the perfect capper for this team. The ultimate Cardiac Cowboys game. Unfortunately, just like Bedlam, the Pokes fell one drive short. Also, this is the best Cardiac Cowboys theory I’ve ever been privy to.

What if you flip the TCU and Kansas State games? Is Oklahoma State still 9-3? Or are they 11-1? I think you could make the argument either way. Would OSU have lacked the offensive firepower to beat Kansas State in the first game of the conference season? Maybe, the Wildcats also still had starting QB Jesse Ertz so they would have looked different as well. Would OSU have been more jacked to play TCU at home in late November to get to the Big 12 Championship? I have to think so.

That’s not an excuse. You have to win the games that are in front of you. In a lot of ways, OSU has been lucky the last few years to have that OU carrot dangling in front of them at the end of the season when they’ve been in the Big 12 title race. This is more of a general point that it takes some luck to have really special seasons. Great teams need less luck than not great teams. Oklahoma State, as we have all now discovered, is not a great team. It needed some scheduling luck.

I honestly don’t know. It’s been since maybe 2012 that the last game of the year and subsequent bowl felt like this big of a bummer. Next week will be a nice sendoff for Rudolph, Washington and the rest, but what was supposed to be a warm-up for Arlington for this batch of seniors will instead be a lethargic farewell to the Camping World Bowl or (at best) the Alamo Bowl.

Like I wrote earlier, expectations matter. And these Pokes did not meet the ones we set for them or even the ones they set for themselves. That’s a bummer, and this game was the nail in that coffin. The Cardiac Cowboys have rocked for the last three years, and that matters. But I’m afraid that ultimately (unlike 2011), we will remember them more for what could have been than what actually was.