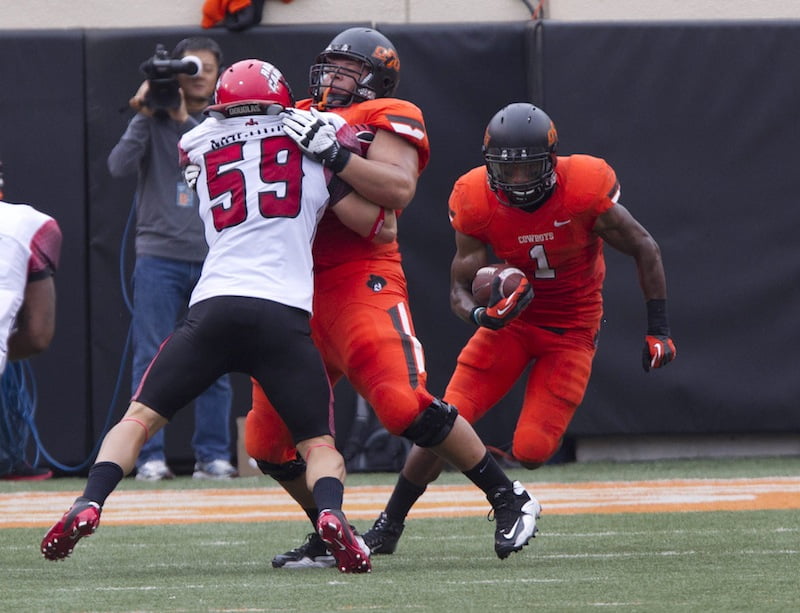 1. I don’t know what people are going to write this week (and I’ll write about this more later) but to me the Lunt/Walsh[1. Lunt has a dislocated kneecap and is out 2-3 weeks btw.] narrative is how deep OSU is these days. Injuries happen[2. You hope your star QB isn’t prominently involved in sentences like this but that’s the way it goes sometimes.] and OSU has been really fortunate the last few years[3. The 11 guys that started the season on defense last year started 138 of a possible 143 games, that’s just luck, guys].

No major QB injuries have derailed games save the atrocious OU-Ole Miss double dip in 2010 when Zac’s right shoulder was on the hearts of coeds everywhere. So QB1 goes down this year and J.W. Walsh steps in and plays really well. That doesn’t mean there’s a QB controversy or they should split time after Lunt gets healthy, it just means OSU is deeper than it’s ever been, and that’s something to be excited about.

2. As for Walsh — it’s not pretty, that’s for sure, but I have to give it up to him for getting the job done today. It’s not like Louisiana is Savannah State[4. They won nine games last year, their first two this season, and were giving up 12 points a game coming in.] and he buried them early.

I lose control of my bowels when he stands in the pocket because he has happy feet that would make Nate Hybl guffaw but with as spread out as this offense is maybe having Zac 2.0 running around like a maniac isn’t a bad thing.

Plus he could have started mailing it in after an 18-year-old took his job but good on him for hanging in there and going hard. Deserves all the credit he gets for his performance today.

3. Totally agree with Slater that the performance of the defense was lost in the QB commotion. They were flawless in the first half after getting housed in Tuscon and the secondary especially played a pissed off game. Thumbs up all the way around.

4. The announcers today were unprecedented, they’re definitely getting their own post later.

5. Blake Jackson was a monster today. Whoever’s playing QB is going to be a big fan of his over the next three months. Also, I think I saw Tracy Moore massaging Lunt’s knee on the bench in the first half – Walsh threw at him seven times with not very much success (three completions, four incompletions).

6. Synopsis of the first three games: what channel is the blowout of the game and of Lunt’s knee on?

7. Of all the games OSU could set the school record for yards — shootouts with OU/Texas the past five years, with Dez and Kendall doing work, with Weeden and Blackmon, against Kansas last year, against Savannah State (!) — we set it with a backup dual threat QB (whom we weren’t sure could throw the ball successfully in a collegiate game) against a halfway decent Sun Belt team whose conference is having a banner year.

8. I usually have a lot of questions after OSU football/basketball games but my biggest is: how did Arizona beat Oklahoma State by three touchdowns?

9. The J.W. Walsh throwing experience is a lot like what I imagine the “Britney Spears going to a bar” experience is like. A hideous sight that usually works out but when it fails it fails on an historically grand scale[5. My question is how you can be a 4-star QB coming out of high school and not be able to throw a 15-yard out while on the run, and really not even come close to being able to throw it.].

10. The biggest takeaway from today: 2007 OSU might have folded today if its first string QB went down, heck, it might have folded without its first string QB going down. OKC Dave and I had a conversation yesterday about how nervous we were about this game even though we feel like this program has moved past its “losing stupid games to Troy” days. I’m still not sure that we know how good this year’s squad is going to be but at least we know everything is moving in the right direction[6. Tuscon not withstanding.].