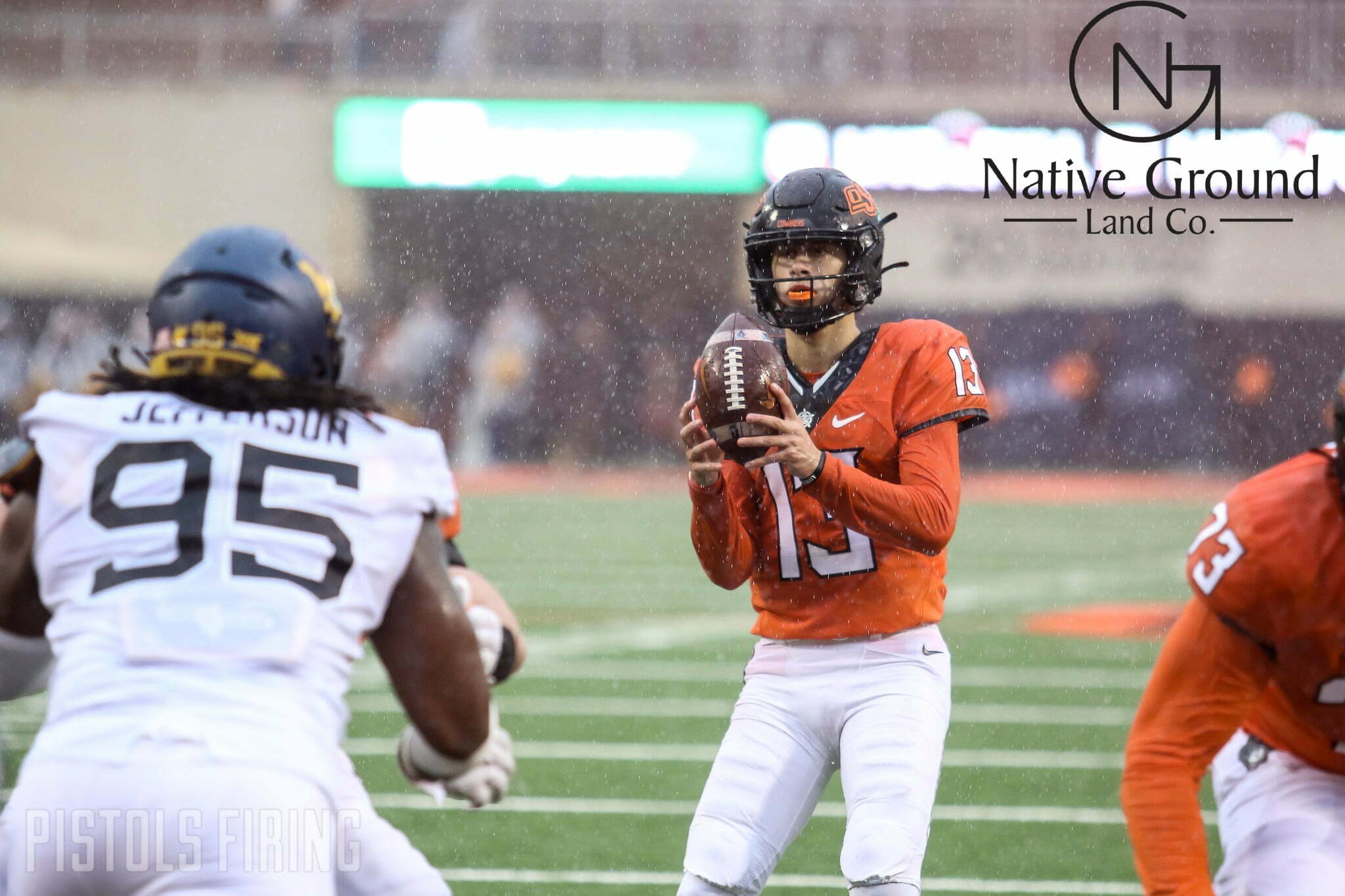 STILLWATER — With rain falling from the heavens, the Cowboys sputtering regular season finally, mercifully came to a close.

Oklahoma State fell to West Virginia 24-19 on Saturday in Boone Pickens Stadium, as OSU finished the regular season winning only one of its final five games. Here are 10 Thoughts from Saturday’s contest.

The Cowboys ran a similar concept on two crucial offensive plays — and neither were successful.

When the Cowboys scored late in the third quarter to pull to within 21-19, they smartly elected to go for 2. True freshman Garret Rangel threw to true freshman Ollie Gordon on a wheel route, but the ball landed splashily on some orange turf.

But the Cowboys got the ball back and went driving again.

Trailing 24-19, OSU had a 4th-and-3 on WVU’s 28-yard line. Gordon was again sent on a wheel route, and again, the ball fell harmlessly to the turf.

If at first you don’t succeed, try and try again — I guess. Or the definition of insanity is doing the same the expecting different results. Choose your cliché.

“On that, it wasn’t necessarily going to go to Ollie,” OSU offensive coordinator Kasey Dunn said. “… We actually wanted to get back through the progression of it. It’s just a young quarterback, and he’s thrown that wheel to Ollie a few times, and Ollie is a great receiver, so I understand why he — he’s a great running back catching the ball. I understand why he would go there, but the way that they passed that thing off, it was a move through the progression and take the shallow, which would’ve been BP on that. We would’ve got the numbers. In my mind, that’s where it was kind of going.

“It’s just one of those things. A veteran QB probably moves through it. A younger guys says ‘Hey, the coaches have told me that in man coverage, it’s gonna get here.’ So, it’s neither here nor there, really. But I thought that was a good number, and I was really in my mind trying to get it to BP.”

Brennan Presley was the Cowboys’ offense early on. At one point he had 63 receiving yards while OSU had only 60 yards of total offense — tell me how that works? (Sacks, that’s how).

He finished having brought in five of his seven targets for 77 yards, but according to the stats, he didn’t get a target in the final 17:16 of the ballgame. With OSU trying to find a way back into this thing, trying to force-feed Presley the ball would’ve been better than not getting it to him at all.

“He’s a dynamic player,” Dunn said. “We’ve got to find a way to get him the football.”

The Cowboys took a lot of shots, particularly late to Braydon Johnson. Johnson finished having caught four of his 11 targets, having a handful of drops.

It was certainly no easy day to be a receiver in the pouring rain and with a quarterback making only his second start. Johnson’s most talked about play from Saturday came on OSU’s last drive. He nearly brought a ball in that would’ve put OSU in the red zone but in trying to keep a foot in bounds, the ball squirted free.

Then there were a couple of balls that could’ve been better thrown but were also balls Johnson could’ve brought in.

Credit to Johnson, he faced the music postgame.

4. OSU Defense Has Solid Day … Outside of Three Plays

Three plays were the difference in those soaked OSU fans leaving the game happy regardless of some offensive blunders. Even stopping one would’ve made a world of difference.

On back-to-back drives in the third quarter, WVU running back Jaylen Anderson broke touchdown runs of 54 and 57 yards. Those came shortly after Kendal Daniels left the game with injury.

OSU’s past five starting quarterbacks have gone as follows:

If that pattern holds, Gunnar Gundy ought to start OSU’s bowl game. It’s been one of the strangest parts about this incredibly strange year.

6. And the Spencer Sanders Situation Gets Stranger

Spencer Sanders is banged up. He started last weekend but was sacked on six occasions, probably not helping with the whole being banged up thing.

He didn’t go through warmups Saturday, but emerged for Senior Day festivities in full pads. And he stood on the sideline in full pads. I wondered if OSU was in for another Mariano Rivera-esque save where he comes out in the fourth quarter to put a game away like he did against Iowa State. He didn’t. And when asked whether Sanders was available at all Saturday, here is what Mike Gundy said.

“I’m not sure, really, how to answer that anymore,” Gundy said. “It just depends on how he feels and kind of where our medical people are. It’s not an injury that’s black and white. It’s a gray area so you just kind of roll with it as it goes.”

7. Even in the Downpour and with a Freshman Quarterback, Pokes Lacked Confidence in Ground Attacked

Weather-wise, this was probably the crummiest game OSU has played in since at least Bedlam in 2016.

If you recall that day, OSU lost to Oklahoma 38-20 with Mason Rudolph, a junior at the time, having attempted only 25 passes. On Saturday, Garret Rangel, a freshman, threw the ball 27 times in the first half. Rangel dropped back on OSU’s first seven offensive plays.

I imagine Rangel hasn’t quite garnered the trust that Rudolph had back then from OSU’s coaching staff, so that crazy stat probably says a lot about where OSU knows its run game is — which is not a great place.

It turns out, OSU did have a run game, which we’ll get to. But it’s hard to blame the staff for not thinking it would show up Saturday because, well, it hasn’t all season.

“We felt like that we needed to be able to try to balance out some of our issues rushing the ball,” Gundy said. We felt like if we could try to get a little more depth and width with the defense with passes, it might open up a little bit of running game, and I’m not so sure that it didn’t work. And then little bit of those numbers will be inflated because of the last possessions. Like we’re behind. He probably threw it 10 times in the last 15 plays, so that got inflated a little bit based on being behind and trying to conserve the clock.”

8. But There Was a Run Game, and It Was Ollie Gordon

But it turns out Saturday was the day — OSU could move the ball on the ground despite struggles doing so all season.

Ollie Gordon was the workhorse with Dominic Richardson missing the game entirely and Jaden Nixon exiting early with injury. A former four-star prospect with offers Michigan, Texas, Arkansas and others, Gordon toted the rock a career-high 17 times and ran for 136 yards and a score.

It was OSU’s highest rushing yardage total of the season. Richardson had a 131-yard outing against Arizona State, but did so on 27 carries.

Before Saturday, Gordon hadn’t had more than seven carries in a game.

Deondre Jackson, a transfer from A&M who at one point had offers from Alabama, Ohio State, Florida and others, also had a solid game when given the most opportunities he has had as a Cowboy. Jackson finished with 12 carries and 56 yards.

In OSU’s final five games of the regular season, the Cowboys were outscored in the first quarter a combined 59-0.

It’s almost as if there is some sort of forcefield around their end zone in the first quarter of these games. OSU even scored on the first play of the second quarter Saturday.

10. This Strange (Regular) Season Is Over

What a weird year.

Injuries undoubtedly decimated this team. Spencer Sanders, Tyler Lacy, Trace Ford, Bryson Green, Blaine Green, Dominic Richardson, just about every offensive lineman at one point or another — it wasn’t pretty. But from a Top 10 team with the Big 12 title game feeling like a lock to wondering whether the Cheez-It Bowl will be too big for OSU is strange.

The torrential downpour was an appropriate way to end it.