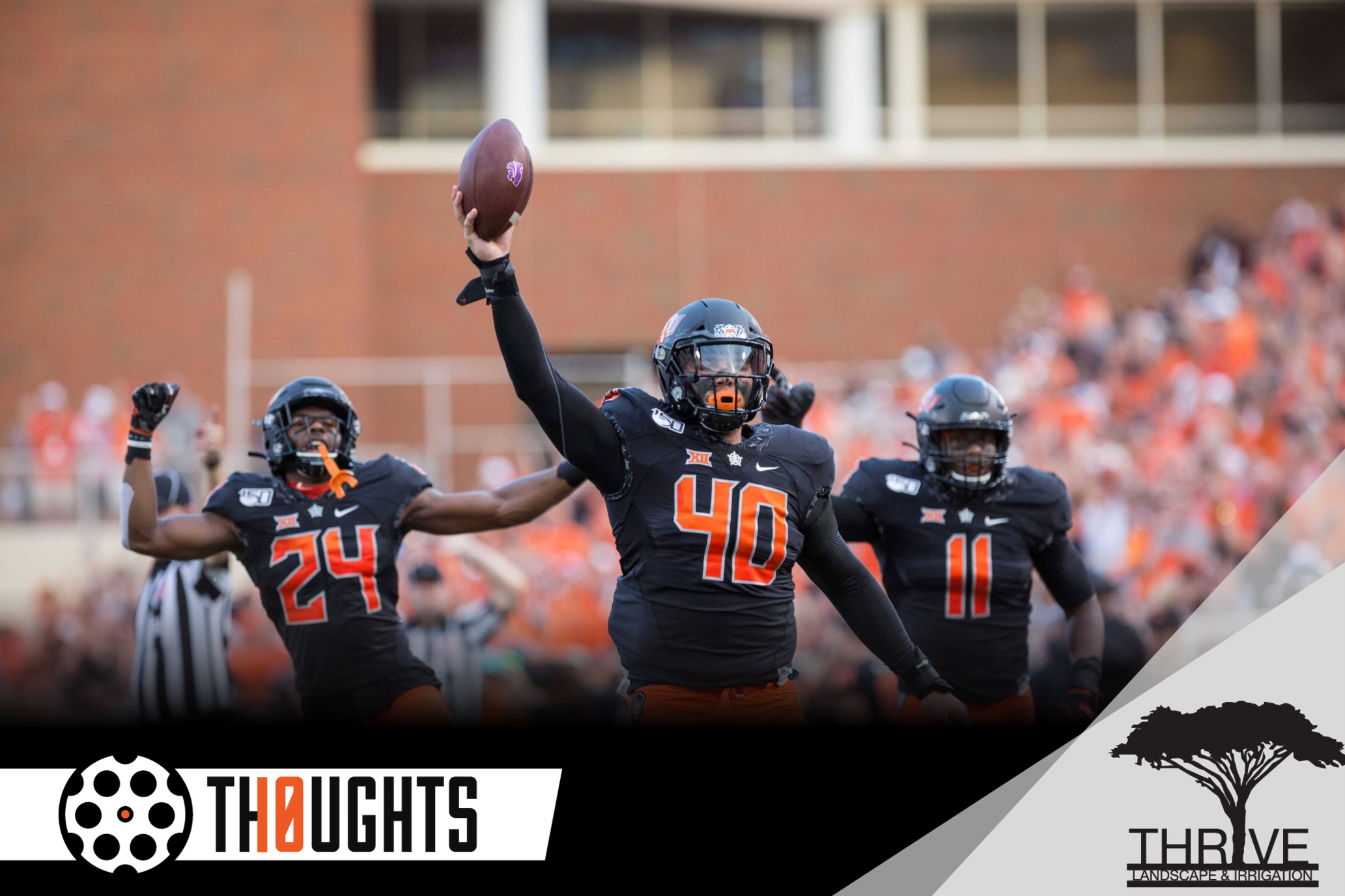 Oklahoma State doubled up Kansas State 26-13 on Saturday in a weird, winding game that was delayed for 70 minutes by lightning, nearly saw an all-time Barry Sanders record fall and did see the Cowboys’ defense (?!) dominate.

Offensively, Chuba Hubbard led the way with a dazzling 296 rushing yards on 11.8 a carry (which almost literally never happens). He had dashes of 18, 20, 44, 53 and 84 yards on Saturday, and I can promise you they were better to consume than they read on paper (and they read pretty great on paper).

His quarterback Spencer Sanders threw for 153 yards and ran for another 52 but also tossed two interceptions. Most of those 153 went to Tylan Wallace, who had eight catches for 145 yards, all in the first half.

The real story of the night was OSU’s defense and has been pretty outstanding for five straight halves of football (more on them below). Tre Sterling had seven tackles to lead the way, while a casted-up Amen Ogbongbemiga and Jarrick Bernard added six of their own as the Pokes allowed just 13 points on 14 total Wildcat drives.

Before we dive deep into the 10 thoughts, a reminder that Thrive Stillwater is sponsoring the 10 Thoughts this year. If you live in Stillwater and need any landscaping work done, give them a call.

He had just three carries in the first quarter and ended with nearly 300 yards. The headliner will obviously be the 84-yard lightning strike to kick-start the second half and — given the way Kansas State was playing offensively — slide the dagger halfway in. But the one that stood out the most actually didn’t even count.

Chuba took this one from Kansas State’s 10, hit his first guy at the 8-yard-line and bullied his way to paydirt. This is in the fourth quarter after four hours against one of the most physical teams in the league. Normal.

Marshall Scott is writing about it in more detail, but his 296 were the sixth-most in school history. Only Barry (four times LOL) and David Thompson have ever had more in a single game.

“He’s really running good,” said Gundy on ESPN+ after the game. “His speed allows him to be a difference-maker. When he gets in the open field he can really roll.”

And you thought I wasn’t going to post the GIF of him outrunning the entire state of Kansas (and portions of Missouri). He can really roll.

At one point in the game, OSU’s defense reached a string of 16 straight drives (over the last two weeks) in which they had given up just six total points. Nothing in the last four drives against Texas and just two field goals against KSU. That’s astonishing. However, here’s the difference in the two games.

Stopping a team like Kansas State early on and getting ahead double digits is nearly a death knell for the purple and silver because teams like Kansas State aren’t built for fireworks. They’re oxen. They move at the same pace the entire game, laboring for the finish line. If you get up two scores on them, it’s going to take loads of turnovers for them to catch up.

But from the jump, they went at a top-five pass defense in the country (in yards per game allowed) and threw it 19 times in the first two quarters to just six in the last two. This is the stuff Gundy’s game architecture dreams are made of.

“In the end we were able to rush the football and secure the game,” he said. Not adding, This is all I’ve ever wanted to do.

In all seriousness, this is how I thought last week would go. Hit a banged-up Texas secondary with all the Tylan, McCray and Jelani they could handle and then end them with Chuba. I had to wait an extra week (and an extra loss), but that’s more or less how Saturday evening in BPS went down.

It was clearly an imperative for the Oklahoma State staff to shift some of the playmaking load from 30 ➡️ 2 this week. In theory, this is smart. In reality, it can end with Tylan taking handoffs out of the diamond formation and running for his life. But while the end result on this particular play was not ideal, I certainly agree with the notion that when you have a pair of All-American caliber players, one shouldn’t have 5X the number of touches as the other.

Coming into this game Chuba had 105 touches, and Tylan had 20 (twenty!). This is both unsustainable (for Chuba) and unwise (because Tylan has eight college games left, including this one). In this game, they had the same number at halftime (although Chuba tripled him up in the end as Gundy took the game out of Spencer’s hands and put it in Chuba’s Canadian mitts).

Still, the first-half reverse from Wolf to Tylan was terrific, and the myriad other ways OSU tried to even the work between their best running back and their best wide receiver, and I hope they make this a trend going forward.

After a good not great first half, he threw it six times in the second half and completed just one more pass to his team than he did to the other one.

Thankfully Chuba was the hammer.

Listen, I’m not mad about it. It’s fine. He is what he is, and guys like him don’t get worse over time, they only get better. The game-to-game trajectory might look like a wave, but the overall trajectory looks like a missile.

One reader in our gameday thread summed it up well after his second pick. Somebody else piped up that Corn would have never thrown that pick and our reader popped back, “Yeah because Corn would have been sacked four seconds before that.”

That’s the whole deal with him.

One thing I do think he needs to work on — and this is maybe the hardest thing as a freshman playing his second game at home with all those emotions — is not trying to score 14 points on every play. He gets zealous to overzealous on some of his rollouts, and instead of taking a 2-yard gain, he tries to fit the ball into a window the size of a cantaloupe 28 yards down the field. Again, this is a delight for me — I love it all — but it’s not the best way to go on a six-game winning streak.

To sum it up: Me if you have anti-Sanders takes that aren’t micro in nature. ⬇️

If you read this blog with any regularity, you know we talk a lot about things like dudes and recruiting rankings and stuff that maybe a lot of you don’t think is important. However, it is important. The way we normally talk about it is when OSU is facing superior talent in the OUs and Texas’ and Art Briles Baylors of the world. It’s sometimes easy to see going the other way, too.

Kansas State recruits poorly, a lot more poorly than Oklahoma State. In the first half, OSU’s defense — not renowned for its speed, size and playmaking ability! — looked like the Cowboys taking on the Giants in Little Giants. They just completely out-classed a hapless KSU offense that, when the weather delay hit, had just 32 yards to OSU’s 200+.

This continued for most of the second half.

Not all of this is on account of the players and their inherent skill (the Devin Harper clip above is more scheme than talent), but some of it is. Maybe most of it.

It’s why we beat that drum until all of our ears ring with it. And while it doesn’t always matter, it certainly matters more often than it doesn’t, as we saw in a good way on this Saturday against KSU.

With Dylan Galloway and Teven Jenkins out with injuries, OSU had three guys starting up front that had combined for five starts before today. They sprung Sanders, Chuba and LD for 9.2 a pop on non-sack plays and nearly 400 yards overall.

All on Charlie Dickey’s old team.

For a unit that’s been two steps forward, one step back throughout, this was definitely a two-steps-forward week that I hope is followed by two more next weekend in Lubbock. 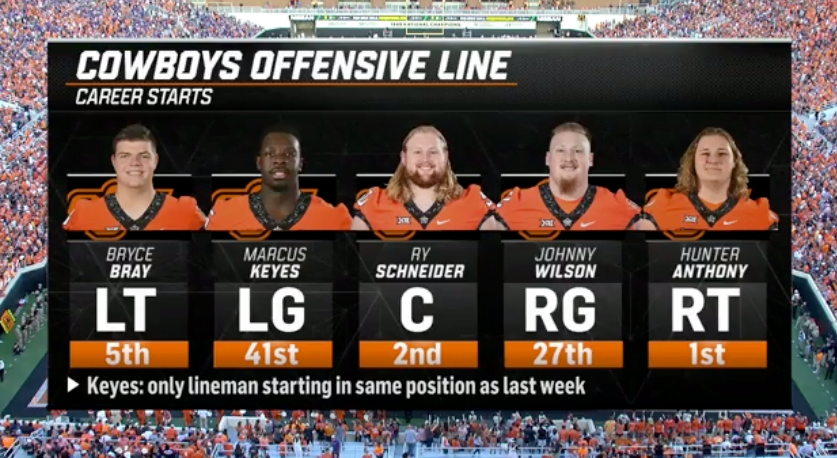 If you just look at the numbers, they look fine, right? OSU was 5-for-5 in the red zone and won by 13 points. Dig a little closer, though, and you’ll see four FGs and still a whole lot of despair inside the 20. The one TD they did have was a good one, and it highlights what I think they should do with Sanders inside the 20.

But one reader posited an intriguing theory in our thread that I think merits some attention: I’m telling y’all Sanders has struggled in red zone practice … Doesn’t hit the back shoulder on the fade. Overthrew Wolff real bad there. I think red zone playcalling is protecting him more than it is just poor playcalling…

Regardless of where the problem is, Kansas State is one of the two or three teams in the league you can kick field goals against and get away with it. OSU has a few other squads coming up where that’s not going to fly.

9. But really, the defense

A sampling of numbers.

“Our defense was tremendous. They knew this was going to be a physical game, and they got right in the middle of it. In the end we were able to rush the football and secure the game. Very proud of Chuba, but I can’t say enough about the defense.”

When Chuba was interviewed after the game, he hit on something that’s been in my head but I hadn’t given thought or words to until he said it. He was asked what they proved against a top-25 team in a bounceback game. This was his response.

“I don’t think it was our best game, but we’re a tough team.”

After watching what I don’t really think was all that tough of a team last year for 13 straight games, this resonates. Is this the best team of the Gundy era? No. Is it the most talented? Certainly not. Does it have the highest ceiling? Doubtful.

But after five games I think we may have learned what Gundy has been preaching all spring and summer. That discipline and toughness were again going to be pillars of the program. Maybe that doesn’t last. Maybe they roll over next week in Lubbock going into the bye week.

However, Chuba is right — at least as of now — they may not always play to the level we (and they) believe they can play to, but they make up for it in ways they haven’t in the past. How many games in the past few years would OSU have been torched in if their QB had thrown for just 153 yards and a pair of picks?

But this year’s squad was buoyed by an unbelievable defensive performance that never waned even a little bit and one of the great 25-carry games in the history of the conference from somebody who was coming off a 37-touch night just seven days earlier.

If that doesn’t define a tough team at this point of the season then I’m not really sure what does.