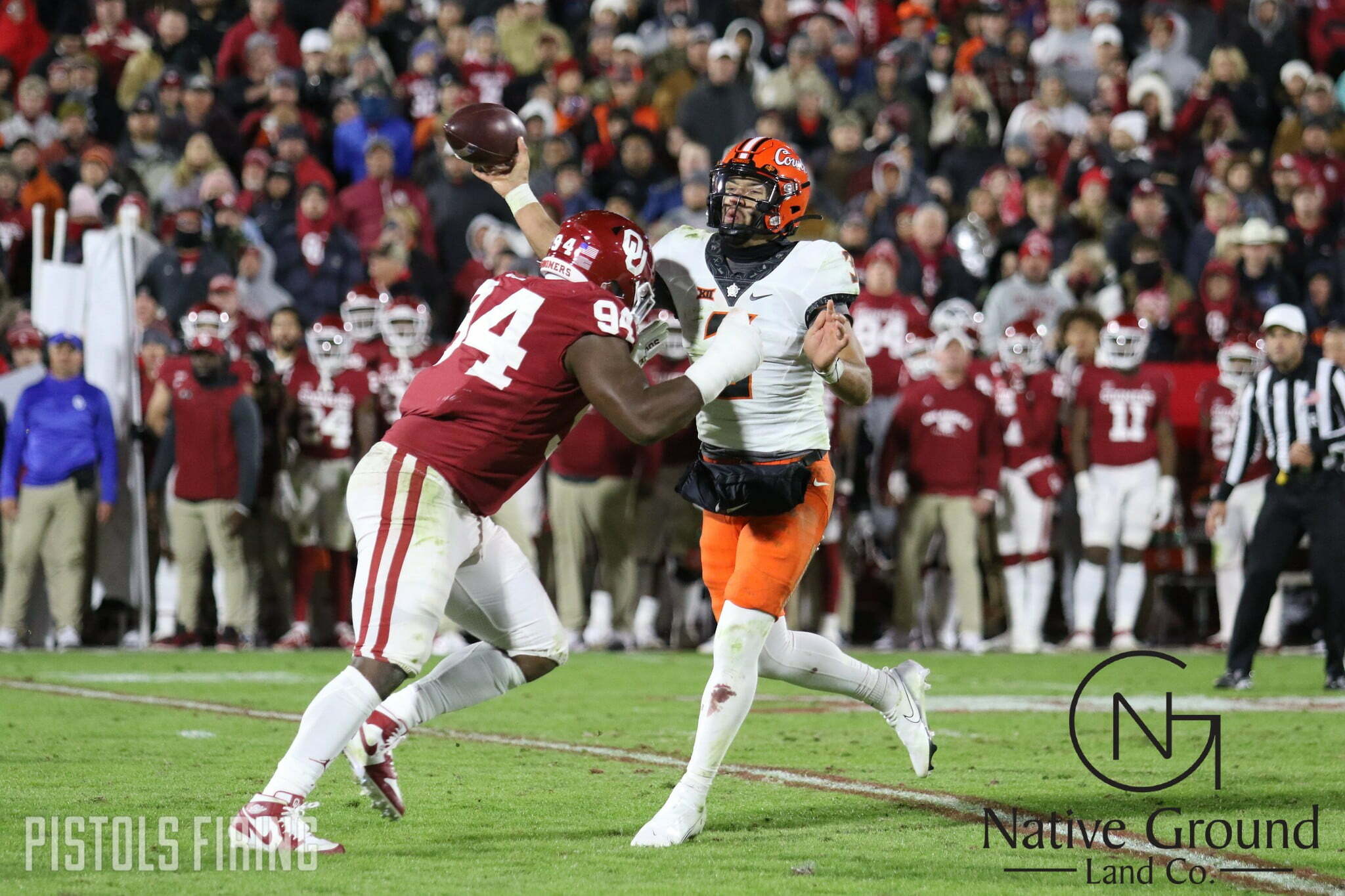 NORMAN — With a rare chance at consecutive Bedlam wins up for grabs, the Cowboys laid an egg.

Oklahoma State fell to Oklahoma 28-13 on Saturday night at Gaylord Family Oklahoma Memorial Stadium. Here are 10 Thoughts from the game.

1. The Worst Quarter of Football in OSU History (Probably)

The OU band, a band known for playing Boomer Sooner on repeat, could hardly keep up with all of its opportunities to blare Norman’s favorite song in the first quarter.

After the first 15-minute period, OU had a 28-0 lead, had forced OSU into two turnovers and had a 299-61 advantage in total offense. It was the least competitive quarter of OSU football I had seen in my 27 years on this rock hurling through space, and I just watched OSU lose 48-0 a few weekends ago.

2. OSU Football Fans Are in a Toxic Relationship

OSU fans got their hearts ripped out a quarter into that game. The Pokes were down 28-0. The offense couldn’t go anywhere. It was over. The Cowboys were dead.

The five stages of grief had already started. And then OSU found a way back into the game, placing their fans’ hearts back in their respective chests just in time to disappoint OSU a second time when the Cowboys’ comeback bid fell flat on its face. The partner in this relationship keeps drawing you back in with its charm before hurting you again.

Surely other fanbases have similar levels of disappointment, but it feels like only at OSU could a basketball team shoot 10% from 3 on Friday night, a cross country team lose a national title on a tiebreaker on Saturday morning and then a football team break its fans’ hearts twice on Saturday night.

3. And It Came against OU’s Worst Team in the Mike Gundy Era

Mike Gundy’s record against OU is well documented (it’s now 3-15 if it isn’t well documented enough), but at the height of Gundy’s tenure, Oklahoma has been historically great.

For a long while, the Sooners had enough Big 12 title trophies to use some as paperweights and doorstops. But this year was different. Since Gundy took over at OSU in 2005, OU had only had five losses in a season once (in 2014). Ten games into 2022, and this rendition of the Sooners already had five losses.

OU had lost five of its past seven. The team was scrambling for bowl eligibility, and a loss Saturday would’ve sent the Sooners to a night game in Lubbock next week in search of a sixth win. It was too perfect.

As we’ve gone over, OSU fans are used to being beaten in this game — it happens (a lot). OSU has only beaten OU in consecutive games five times in history. But given how things were entering this game, it’s a travesty this wasn’t the sixth time.

Gundy has become known for conservative fourth-down calls, and despite it angering fans on occasions, it usually works for him. But what did OSU have to lose down 28?

Here are a few fourth-down decisions OSU made Saturday in the first half:

I can usually at least understand where the decision is coming from when OSU punts in similar scenarios, but those made less sense than usual.

The Cowboys ended up going for a 4th-and-2 from the OU 17 in the third quarter while down 25. They completed a slant pass for 1 yard … so, does that make all of those other calls right? No. Will it deter OSU from going for it on future fourth downs? Probably.

“Well, there’s no reason to go for fourth downs in the second quarter, and potentially dig yourself deeper into a hole,” Gundy said. “But then as the game goes on, the clock starts to work against us and so we have to try to convert to keep things alive.”

5. But Logan Ward Had a Day

If you’re gonna punt, might as well punt it well.

Logan Ward was one of the Cowboys’ lone bright spots (it’s probably not ideal for a team when its backup punter is a bright spot).

In the first half alone, Ward had 244 punting yards, had two punts of 50 or more yards and downed two punts inside the OU 10-yard line.

After Spencer Sanders’ savior performance against Iowa State last weekend, there were a few talks of where he stands in the pantheon of OSU greats — he was mostly being compared to Mason Rudolph.

Sanders is two wins away from tying Rudolph as the winningest starting quarterback in program history. But in trying to get to that plateau, Sanders set a different record Saturday. With his four picks, Sanders has thrown 40 in his career, passing Tone Jones and Mike Gundy for the most in program history.

After that Iowa State game, OSU fans realize now more than ever what Sanders brings to his team. But the fact that Sanders could finish his career with the most wins and most interceptions in program history somewhat poetically describes the journey he has been on as the Cowboys’ quarterback. It’s been chaotic.

He doesn’t have (and hasn’t had) a good offensive line. Sanders was sacked sick times Saturday and hurried another 12 times. He doesn’t have a run game. OSU running backs had 56 rushing yards on 15 carries Saturday. But four picks in a game, whether its Bedlam or for a Big 12 Championship, probably isn’t going to win a whole lot.

7. Somehow, That Defense Deserved to Win

When it was 28-0 14 minutes into the game, Derek Mason’s defense looked like it might get 70 hung on it, but OSU’s D held Oklahoma scoreless in its final 12 drives of the game, forcing nine three-and-outs.

OU had 299 yards of total offense in the first quarter and only 135 yards in the final three. OSU’s defense did enough to win the game. Was the start something out of a horror movie? Yeah, but this wasn’t on OSU’s D.

8. And It Wasn’t Even Eric Gray

Over OSU’s past four games, the Cowboys are averaging 12.3 points per. For reference Iowa (IOWA) is averaging 23.5 over its last four.

It’s bad, and it starts up front. OSU can’t run the ball, and with two games left, it’s safe to assume the Cowboys aren’t going to figure it out between now and then.

OSU had two receivers (Brennan Presley and Braydon Johnson) with more than 100 receiving yards Saturday and came away with 13 points. It’s almost inconceivable.

Yes, the Cowboys are banged up more now than they have been in a long while. Sanders has been hurt, receivers have been hurt, running backs have been hurt and the offensive line is still playing its yearslong game of “musical chairs.” But 12.3 points a game isn’t going to do it.

After Saturday, OSU is officially out of the Big 12 title race, so what now?

The best OSU can do is finish 9-4 after some bowl win, and that kind of feels like what this year could amount to.

OSU will probably find a way to squeak by a West Virginia team waiting to fire its coach next weekend before going to some bowl and handing it off to a defensive lineman and pulling off some quarterback throwback that’ll be fun and propel OSU forward. That’s what Gundy teams do in spots like this. But after the Texas game, it just felt like this team was destined for so much more.