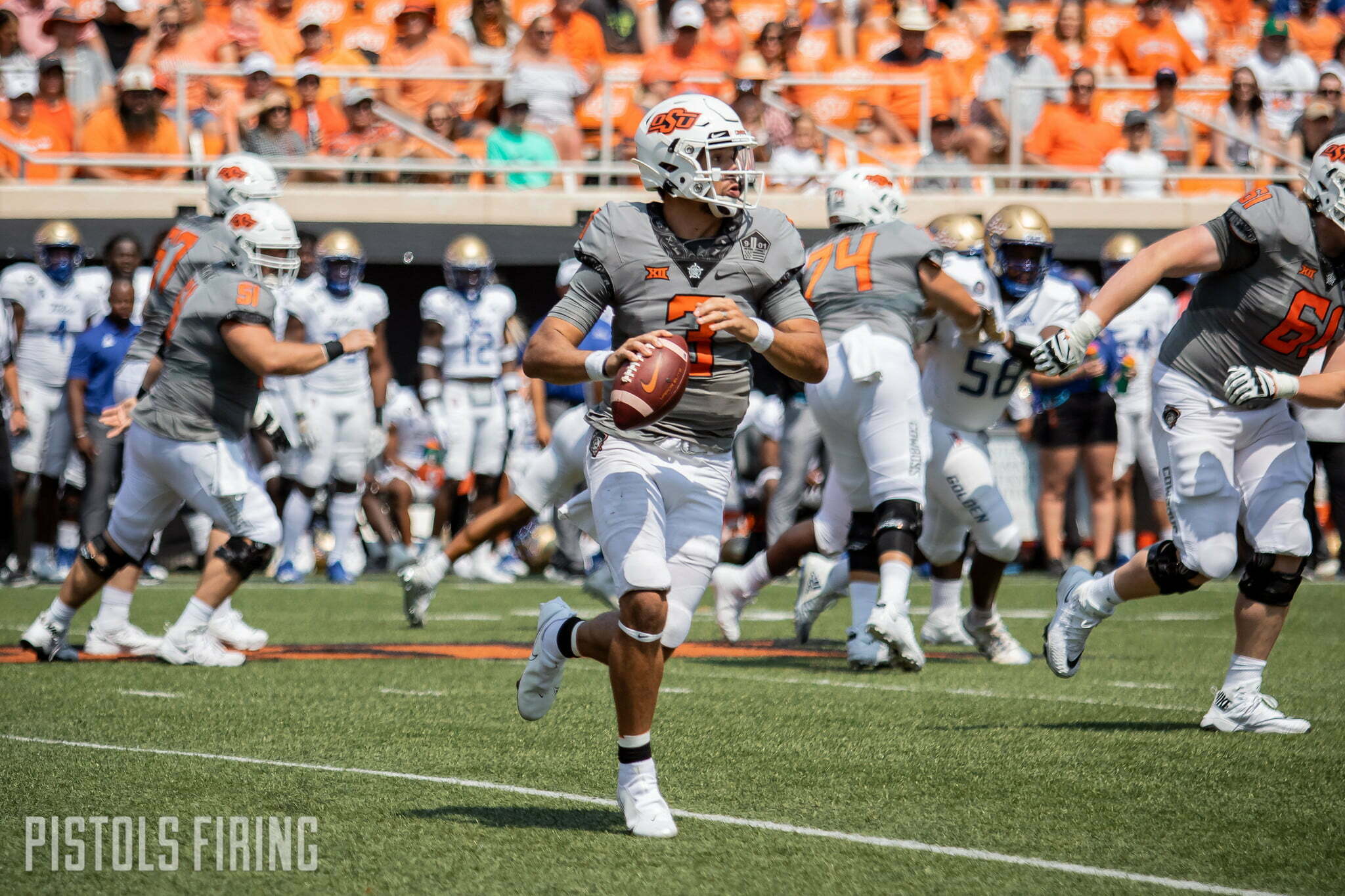 STILLWATER — The Cowboys are unbeaten two weeks into the season, but neither win was particularly pretty.

1. Explaining Spencer Sanders’ Time as OSU’s Starter in One Play

Early in the fourth quarter, Spencer Sanders provided a spark that the Cowboys were missing last week with Shane Illingworth.

From Tulsa’s 45, Sanders found a seam and scampered down the sideline to his left. The Boone Pickens Stadium crowd roared. This was the Sanders that has often been advertised, a gunslinger with wheels. However, the ball was in his right arm, something TU defender LJ Wallace took advantage of punching it out. Luckily for Sanders it was touched by a defender out of bounds, meaning the Golden Hurricane’s recovery was nullified. It showed the highs and lows of a rollercoaster OSU’s fanbase has been on for the better part of three years.

Through 21 games, it’s still tough to tell exactly what Sanders is for the Cowboys. He has shown what he can be. In his last game before Saturday’s, he won the MVP of the of the Cheez-It Bowl against a Miami team that entered this season ranked in the Top 15. In that game, he had 305 passing yards, four touchdowns and no interceptions. Then he has stretches like his first half Saturday where the rhythm just seems off, and it’s topped off with an ugly interception.

Sanders finished Saturday’s game with 173 passing yards, two touchdowns and the interception. He also carried the ball 10 times for 25 yards.

It was Sanders’ first game of the season in a game where almost everyone else had already gotten their feet wet, so maybe it’s too harsh to judge at this point. When Sanders is good, he is great. When he isn’t, it’s tough to watch. To this point consistency has been the issue, and with Boise State next week before a full Big 12 schedule, OSU had better hope he finds that consistency.

If such a poll existed, Kasey Dunn’s approval rating as OSU’s offensive coordinator was at an all-time low in the first half.

The Cowboys mustered 135 yards of total offense and seven points, five punts and the aforementioned pick-six.

It got better in the second half, particularly in the fourth quarter. But this feels like the most heat Dunn has received from the fanbase since being a darling hire ahead of the 2020 season. In the first quarter, OSU ran five pass plays, three came on third down. It got a tad predictable, which bemoaned the Cowboys’ fanbase on social media and in the stands at BPS.

On of OSU’s more creative play calls of the game iced it. On third-and-eight, the Cowboys came out in the I-formation, and it felt as if the Pokes were going to hand the ball off a third consecutive time and accept that Tulsa was going to get the ball back. Instead, Sanders faked a handoff and did an old-fashioned bootleg to get the nine yards necessary for the first down. It was brilliant. It caught everyone in the stadium off guard and took advantage of Sanders’ running ability.

The Cowboys won the game, but Tulsa had 347 yards of total offense to the Cowboys’ 313. OSU ran the ball 43 times but picked up just 3.3 yards per carry. Aside from Kansas, these first two games are supposed to be the Pokes’ easiest. Now they’re forced with trying to figure things out on a blue field in Idaho.

Three of the four receivers who caught a pass for the Pokes against Tulsa were true freshmen. The other was sophomore Brennan Presley.

Sanders’ two TD passes went to freshmen and both were excellent efforts. Jaden Bray, who caught four of his five targets for 81 yards, caught a ball across the middle in the first quarter. With a TU defender wrapped around his ankle, the 6-foot-2, 187-pound Bray side-stepped a second defender and broke free for a 26-yard touchdown.

Bryson Green one-upped his classmate in the fourth quarter, with OSU trailing 14-7, Sanders heaved a ball to the corner of the end zone on third down. Green miraculously came down with the ball and managed to narrowly get his foot down in bounds before he fell out of bounds.

It was so inconceivable that he caught that ball that the officials didn’t signal for a touchdown or an incomplete pass. They just kind of stood there dumbfounded. Green caught two of his three targets for 16 yards.

There will be growing pains. Bray had a third-down drop that would’ve helped the cause in the struggling first half. But, Dunn’s position group looks to be in a good spot moving forward.

Jaylen Warren was a hot name through spring ball and fall camp.

The Utah State transfer running back garnered a lot of praise, but the fanbase just hadn’t seen him in action. In his first outing as a Cowboy, Warren mustered just nine yards on six carries. It wasn’t just a him thing, the Cowboy run game was poor all the way around.

It wasn’t too much better against Tulsa, but in bursts, Warren showed how good he could be. He had 37 yards on 14 carries with one touchdown run that saw him evade seven Golden Hurricane defenders.

“Hell of a call,” Dunn joked. “That’s exactly how I drew it up: zig-zag three or four times, run a couple guys over, get yourself in the end zone.”

5. But Richardson Made Good on Limited Carries

With the lack of a competent run game against Missouri State, sophomore Dominic Richardson was the odd man out of the Cowboys’ four-headed running back room. He didn’t get a carry.

Dezmon Jackson left in the second half of Saturday’s game with a leg injury, and Richardson got his chance. On his first carry of the year, Richardson ran 13 yards, the longest run an OSU running back has had this season. He finished with four carries for 18 yards. His 4.5 yards per carry, though a limited sample size, is best among the Cowboys’ backs.

For the first time since 2014, the Cowboys have a kick return touchdown (not including last year’s onside return TD).

LD Brown promptly erased a Tulsa lead with a 98-yard TD. It is the seventh-longest kick return in school history. He went from one side of the field to the other, didn’t get tripped up by the kicker and had enough gas in the tank to finish his sprint.

Also give credit to Kanion Williams who finished a pancake off after blocking his guy for about 50 yards.

“I knew I had to get to the left side of the field very fast, so I just seen it,” Brown said. “The field just opened. I just hit the hole after that. Everybody got the block. Kanion Williams had the touchdown block. Just make a kicker miss. If I got tackled by the kicker, everybody was not gonna let me hear the end of that.”

OSU not having a special teams coordinator often gets brought up when something goes wrong, but the Cowboys were solid in that aspect Saturday.

The Cowboys had 150 return yards to Tulsa’s 17. Yes, the 98-yard touchdown return helped that, but take that away and it’s still 52-19. OSU was good in returns and great in coverage.

8. Jelani Dominates Across the Country

The Cowboys were without Logan Carter again Saturday. His absence has been undisclosed, but he was on the sideline in street clothes. In his place Braden Cassity and Austin Jarrard filled in. Neither have a catch in as a Division-I football player. They were solid in their blocking assignments, and Jarrard had a fumble recovery after Brown lost hold of the ball.

But the Cowboys’ inexperience at the position is compounded when stats started coming out from Virginia’s 42-14 victory against Illinois. Jelani Woods, the quarterback turned Cowboy back turned Virginia Cavalier, had five catches for 122 yards and a touchdown Saturday. Woods was a fan favorite in Stillwater because of his willingness to move from quarterback, so it was cool to see him have success.

9. What Malcolm Rodriguez Is Doing Is Crazy

Malcolm Rodriguez entered Week 2 of the college football season second in the country in total tackles. He had 15 last weekend against Missouri State.

He’ll be near (if not at) the top of that list after this weekend. Rodriguez added another 13 tackles to his state line against Tulsa. Quick math, Rodriguez has 28 tackles in two games. For reference, Brock Martin had 27 tackles during all of last season. Trace Ford had 22.

“He’s making me look good,” defensive coordinator Jim Knowles said. “I said to him before the game, ‘I’m glad you’re here. Go out and make me look good.’ We work really well together. He’s almost like a son to me. He knows how I think, he knows the scheme and I do my best to put him in positions where he can see the play and react because he’s a guy that gets people on the ground.”

10. Bring on the Smurf Turf

The next time Oklahoma State takes the field, the field be blue.

Boise State’s turf a unique aspect of college football, and it’s going to be cool to see the Cowboys take part in that tradition. As fun as that aspect of it will be, this will be quite the test for OSU.

Boise State is 1-1 on the year, beating the bricks off UTEP on Friday night. The Broncos started the year with a tight loss to newly accepted Big 12 squad UCF.

The Boise State game was a bright spot in OSU’s 2018 season. Taylor Cornelius led the Pokes to a 44-21 victory in Boone Pickens Stadium. That 2018 squad had its fair share of struggles, but scoring wasn’t one of them. If OSU can figure out its offensive woes in a hostile environment, it would go a long way to putting the fans’ minds at ease entering the Big 12 slate.