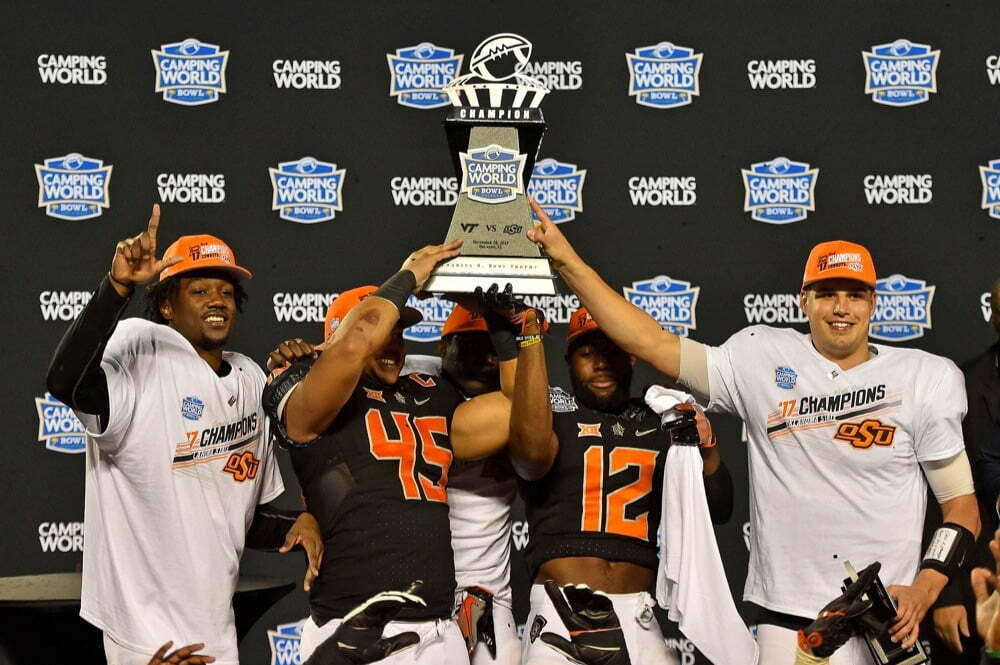 In maybe the longest game in bowl history, Oklahoma State outlasted Virginia Tech 30-21 and came within one point of the scoring the most anybody has scored on the Hokies all year (CFP semifinalist Clemson also posted 31).

Mason Rudolph tossed for a tasty 351 yards in his farewell in the orange and black, Justice Hill ran for 120 as he launches an early HEI5MAN™ campaign for 2018 and James Washington and Marcell Ateman combined for 10 catches, 133 yards and a TD. Offensively, it was about as ideal of a sendoff as you could ask for from the Pokes.

Defensively it was a different story. Virginia Tech came into the game with a freshman at QB and without its best receiver and running back and proceeded to shred the OSU defense to the tune of 26 plays for 158 yards on the first two drives. The Cowboys settled in (sort of) later and allowed just 3 TDs on 11 drives.

It’s the end of an era for Oklahoma State football, and it was a hell of an era. With that, for the final time with Mason Rudolph and James Washington playing football for the Pokes, let’s dive into 10 thoughts.

We might as well start here. No. 2 was below average in the first half and badly missed some open receivers, but he turned it on in the second. He had a stretch of 13 targets in the middle of the game that resulted in 10 plays of 10+ yards, including a final strike to James Washington for six and this filthy toss to Dillon Stoner for another six.

Guessing Justin Fuente doesn’t see a whole lot of this in the ACC. What a throw. What a catch. 20-6 #okstate. pic.twitter.com/Iowpv2ZeE3

We will debate his value at OSU until the end of time (or at least until Spencer Sanders’ first game), but it’s hard to deny 32 wins, the single-season passing record, the career passing record and the 92 TDs. Despite the frustration and the overthrows and the poor decisions at times, it was fun to watch him deal one final time.

Virginia Tech had the ball for 38 minutes and ran 29 more plays than Oklahoma State. Justin Fuente said at halftime that they were doing exactly what they wanted to do, and they’re exactly the kind of team (sort of a more extreme and slightly more athletics Kansas State) that can pull it off. Eventually turnovers and OSU’s offense overwhelmed them, but this was about as good a postseason matchup for Oklahoma State as Snappy Salads is for Bartolo Colon.

3. James Washington is That Dude

What can I say that hasn’t already been said? He’s the most accomplished wideout in Oklahoma State history after surpassing Rashaun Woods on Thursday on this bomb. He finishes his career with 4,472 yards, second in Big 12 history.

He was as fun to watch as anyone in recent college football history. He put up 5 for 126 on a secondary that had allowed just three other 100-yard receivers all year. Once Rudolph started finding him late, he was magnificent.

4. Third Down Woes, Saved by TOs

Virginia Tech came into the game No. 73 in the country averaging 39 percent on third downs on the season, but they completed 56 percent of their 18 third down attempts against Glenn Spencer’s defense. The reasons were innumerable. Stupid penalties. Out-classed backup corners. Calvin Bundage overpursuit (drink).

Delaware (Delaware!) held VT to fewer yards per play than the 5.6 they gained on Thursday. Losing A.J. Green and Rodarius Williams certainly hurt OSU on the perimeter, but that wasn’t their only issue. They got pummeled up front all night and had few answers at the second level.

And yet … the one thing they didn’t get all season, they got when they desperately needed it. A fumble recovery by The Person Most Likely To Be Hired By A Company Post-College That Immediately Doubles Its Revenue For No Apparent Reason and Darius Curry’s pick. VT was driving to make it 14-3 (gulp) before the first TO and driving to make it 28-27 before the second. Game-swingers, both. And that doesn’t even include the fumble/TO on downs Tech had in the first minute of the fourth.

Darius Curry with the late pick. #okstate now looking for the dagger. pic.twitter.com/8fhGihwcMC

Here’s what will probably end up as the game-sealing run by Hill. pic.twitter.com/C4dpyeuVvH

I thought Mark Cooper said it well in the tweet below. Hill seemingly does not tire throughout the season. He’s like the Benjamin Button of running backs. He keeps getting stronger and fresher. Maybe that’s a house of cards come next year sans Washington, Ateman and Rudolph, but he’s somebody it seems like you can build around for at least 13 more games.

Is it just me, or does Justice Hill look faster with every game?

He has it all, and it was all on display on Thursday against a team that had allowed just one other 100-yard rusher this year. The vision, the patience, the power, the speed and the durability. He is the greater Joseph (Randle), and I’m glad OSU has him for 2018. Also, did you notice who OSU went to when they needed a closer? I count 11 of OSU’s last 16 plays that were either handoffs to Hill or targets to him from Rudolph. Ice man.

When this play by A.J. Green on Josh Jackson it struck me as odd because of how few times I’ve actually seen it happen over the last few years. Normally an OSU corner would lay back, and Jackson would scoot for the first down. But Green trusted the safety behind him and got in Jackson’s face.

It should not be startling to see more plays like this, and I hope the Cowboys incorporate more of this as they (hopefully) pile up more athletes on the defensive side.

Dan Bailey and Ben Grogan only had one season each that was better, percentage-wise than what Ammendola just slapped together. He went 23 of 29 on the year and didn’t miss in the last five games (11 of 11). His game-clincher looked like it was heading for that place that national titles go to die but something kept it true, and now OSU has another valuable piece of the scoring puzzle going into 2018.

And with the chips down late OSU fed its bellcows. Hill had 48 big yards in the second half. Washington had all 126 of his yards in the second. And Rudolph had 201 of his 351 in the final 30 minutes of his career. It all added up to 8 yards per play on 33 plays against a top 10 defense nationally, and it all sort of points to why we were all so frustrated all season with just nine regular season wins.

OSU seemed to do whatever it wanted whenever it wanted to do it. How that resulted in losses to TCU (stinks!) and Kansas State (really stinks!) will be one of the great mysteries of the Gundy era. Regardless, Thursday was confirmation that maybe Big 12 defenses don’t stink. Maybe Big 12 offenses are just the best in the country. Maybe OSU got into VT’s lunch pail and stole its eating money and feasted with its playmakers.

Five plays stood out during this game. One was the timeout OSU called with 4 seconds left in the first half. They basically told Fuente, DO THE CENTRAL MICHIGAN THING TO US IF YOU WANT TO HERE’S SOME TIME TO PLAY WITH HAVE FUN! Another was the fake punt. What, you came into this game thinking VT wasn’t going to run a fake punt/field goal/kickoff/bus ride to the game? That is literally what they’ve built their program on, and you’re in a bowl game, and OSU looked like it had just seen the ghost of Bob Fenimore.

The other three were fourth-down calls. One was on the first drive. The other two were late in the game when OSU was searching for the dagger. Here’s my preference for decisions.

They had an opportunity to go up 16 with just under 7 minutes left which means VT has to either score three times or score twice and get two 2-point conversions (which for VT is like asking them to part the Atlantic Ocean and walk to England). You were on their 31 which means you’re asking for a bomb from Ammendola, but he was feeling it. I don’t feel strongly one way or the other, and I could be talked into going for it there, but that was what I was thinking in the moment.

10. Microcosm of the season

I’m glad Carson tweeted this because I think we were all thinking it. Three times OSU drove late in the fourth quarter with an opportunity to slam the door, and they got exactly 3 points out of that. It was the OU game all over again but thankfully for OSU with a lead this time.

This game really encapsulates the entire #okstate season: Allowing an inferior team to hang around.

Ultimately (and unfortunately) I think this will be the legacy of the Rudolph era. Great players, good teams, but lacked that blood-in-the-water instinct of champions. We’ll never ultimately know whether this squad overachieved or underachieved overall (probably a little bit of both), and I’ll always remember No. 2, No. 28, No. 3 and the rest fondly. But Thursday was another reminder of what could have been.

Was this a great three-year run for OSU? Of course. It was one of the best (if not the best) in school history. A 30-win stretch over three years is no joke. And OSU did what it needed to do against Virginia Tech to grab some momentum for what should be a fascinating 2018.

But the year ended unlike it began. After OSU came out popping against Tulsa on that late summer day in Boone Pickens Stadium, we all had roses dancing in our heads. This group was tantalizing all year, all of the last three years. Maybe we thought they were something they were not. Maybe they never learned how to end teams. Maybe they never graduated to where they were supposed to go. Who knows.

What I do know is that they took care of business in a bowl for the second-straight year. I know Washington and Rudolph got their records. I know Gundy’s mullet got its airtime. I know only Alabama, Ohio State and OU have more 10-win seasons since 2010 than Oklahoma State. I know I’m going to miss those deep strikes from Rudolph to Washington. I know Marcell Ateman is a grown ass man.

I know Mike Gundy is going to make $417,000 a month next year despite the fact that he looks like he manages a 7-11. I know this season was fun and infuriating and divisive and grandiose (sometimes all at once). I know Spencer Sanders is going to be awesome. I know all of this all goes by way too fast.