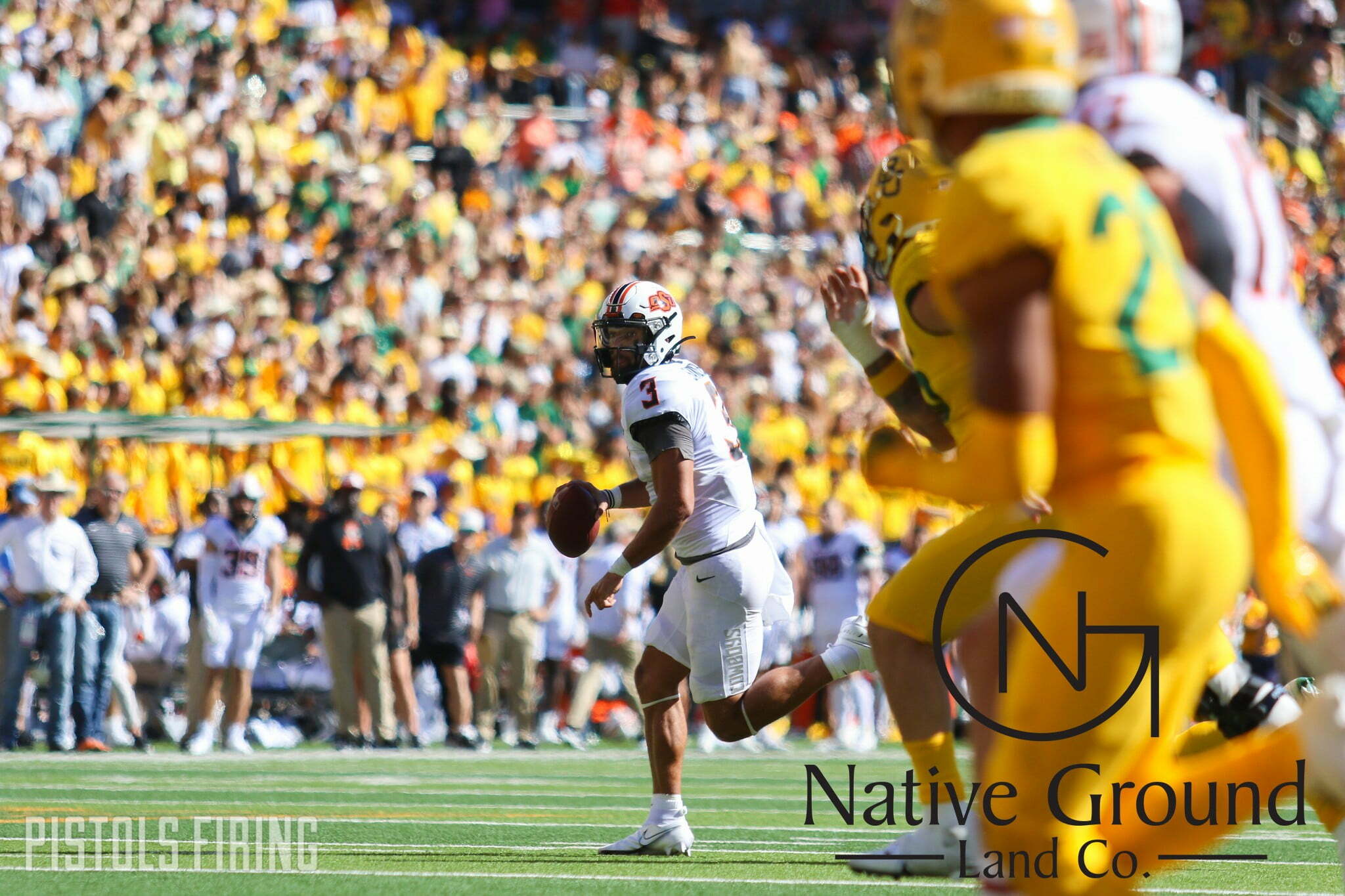 WACO, Texas — The Cowboys have finally been tested in 2022, and they came out winners.

Oklahoma State beat Baylor 36-25 in the Big 12 title rematch at McLane Stadium on Saturday. Here are 10 Thoughts from the game.

A number has been attached to the name Spencer Sanders all week — seven.

Any time Sanders was mentioned in relation to this game, the fact that he threw seven interceptions against Baylor last season was soon to follow. Well, he might’ve thrown one interception Saturday, but Sanders went to the Bear den and played fantastically.

Sanders was 20-for-29 with 181 passing yards, 75 rushing yards and two total touchdowns. He looked like a video game character against bad teams in the nonconference, but he was stellar again to start Big 12 play.

Early in the second half, Baylor found some momentum, and Spencer Sanders threw an interception. You could cut the feeling of “here we go again” with a knife. How did Sanders respond? With a 49-yard nuke on OSU’s next offensive play to Braydon Johnson to set up a score.

“It was, ‘We’re not gonna ball up. We’re gonna play ball,'” said OSU offensive coordinator Kasey Dunn of taking a shot after the interception. “I think we got into our 10-personnel set and wanted to get aggressive with it and wanted to play as fast as we could. Wanted to get back to kinda how we moved the ball in our first series and wanted to play some tempo. It just so happened that we got the shot like that.”

Sanders’ most impressive throw of the day probably came in the first quarter. On 3rd-and-7, shortly before getting cut in half, Sanders threw a dart to where he knew Brennan Presley was going to be before Presley had made his cut. It went for 19 yards to continue a drive.

“Spencer’s a competitive dude, now,” OSU coach Mike Gundy said. “We all know this because we cover him locally, but for some reason, people don’t give him enough credit. It is what it is.”

2. And His Most Impressive Play Wasn’t a Throw or Run

OSU was chewing clock in the fourth quarter and needed only a field goal to go up two scores when true freshman Ollie Gordon made a true freshman mistake and put the ball on the turf.

There were more Bears than Cowboys around the loose ball, but Sanders supermaned into frame for the recovery, perhaps the most important play of the game. Him securing that ball and Tanner Brown’s ensuing field goal all but put things on ice.

“I seen the ball come out, and that ball ain’t nobody else’s but mine,” Sanders said. “That’s the only thing that went through my head. I did the best I could to get to it as fast as possible.”

When Mike Gundy elected to punt on 4th-and-4 from the Baylor 39, you could almost hear a collective groan from Stillwater all the way down here in Waco, but with a weapon like Tom Hutton, Gundy knew what he was doing.

Hutton coolly pinned Baylor on its 2 (with help from Braylin Presley of all people). And the first play of the ensuing series, Brock Martin blew up a Baylor pitch play, forcing Baylor’s ballcarrier to bounce deeper into his endzone where Kendal Daniels and Mason Cobb brought him down for 2 points.

It’s the second time this season Hutton has essentially forced a safety after a similar instance against Central Michigan.

And that was just the start of OSU’s special teams dominance. To start the second half, Jaden Nixon housed a kickoff 98 yards for a score, and not too long later, Brennan Presley returned a kick to the 50.

In the postgame, Gundy said the difference was special teams.

“We out-special teamed them by about 157 yards, so almost a football field and a half in special teams,” Gundy said. “… The difference in the game was special teams.”

4. Dave Aranda Is a Computer

If the analytics told Dave Aranda to punt on 1st-and-10 from the opponent’s 11-yard line, I think he’d do it.

The Bears went for it on five fourth downs Saturday, converting three of them.

The most head-scratching of them came in the third quarter. On 4th-and-2 from the Baylor 33, Blake Shapen threw an incomplete pass that led to an OSU field goal. This isn’t a new thing for Aranda. Last season in Stillwater, he went for it on 4th-and-4 from his own 36 and didn’t get it.

Sometimes it does work, like later in the third quarter. On 4th-and-5 from his own 30, Shapen threw a 70-yard touchdown to Monaray Baldwin.

It’s the definition of a double-edged sword, and Aranda’s dedication to the analytics is admirable. Previous results don’t affect his future decisions. It’s a wild thing to watch.

5. And Gundy Let the Mullet Flow a Little, Too

On OSU’s first drive of the game, the Pokes’ got down to the Baylor 15-yard line before getting stopped on third down. Instead of tucking tail and kicking a field goal to tie it, Gundy went for it.

A Spencer Sanders quarterback sneak continued a drive that ended in a touchdown. It’s a further example of analytics versus feel on going for it on fourth down.

Months after the Cowboys’ conference title and college football playoff dreams ended at the 1-yard line in Arlington, they were in similar positions against the same team in Waco, and the Pokes came through.

Oklahoma State got to the Baylor 1-yard line three times and walked away with 17 points. The first time ended in a Spencer Sanders QB sneak, the second in a Dominic Richardson dive over the top and the third in a field goal to put the Cowboys up three scores instead of two, Gundy’s reasoning for not going for it on fourth down.

Questions were rightfully asked about the Cowboys’ defense through the nonconference, but that was a lot better.

For most of the first half, it seemed bend-not-break, but Baylor had only 3 points at halftime. It’s not quite at the level of last season, but if this inch-by-inch improvement can continue, the Cowboys will be fine.

“It’s progression, right?” OSU defensive coordinator Derek Mason said. “It’s progression. I think these guys are determined to get better. We’ll look at the tape, and there’s obviously some things we’ll want to clean up. But I think for the most part, guys are straining. I see the strain. We’re playing a lot of guys, which is good for the future of Cowboy Football, but right now the future is today. We need guys to be able to give us everything they’ve got, and I thought they did today.”

Before Saturday, Baylor hadn’t allowed more than 90 rushing yards. The Pokes had 112 at halftime.

OSU ended with 166 rush yards. Sanders’ 75 were the most among individuals, but Richardson was an absolute hammer.

Richardson toted the rock 24 times for 73 yards and the one score. He didn’t have a rush longer than 10 yards, but when there seemed to be nothing there, Richardson would pound through arm tackles and fall forward for a gain of 4 or 5. It has to wear out a defense to have to tackle him over and over again.

Through the nonconference, it looked like OSU might not have a guy dominate targets this year, but in the Cowboys’ first actual test of the year, Dunn went to Brennan Presley.

Presley had eight catches on 10 targets, more than double the number of catches as OSU’s second receiver, for 86 yards.

In the first half in particular, Presley and Sanders found a soft spot in a Baylor zone and hit it time after time. Presley had seven catches for 70 yards in the first half.

Is this a matchup-specific thing? Or is Presley going to get the lion’s share of looks from here on out? Tough to say for now, but it looked purposeful that Dunn was putting the ball in Presley’s hands.

10. The Road to Arlington Is Clear, Yet Treacherous

The Big 12 is surely going to cannibalize itself. So, a road win like Saturday’s is huge, and a road win against a title contender is even bigger.

With how OU and Texas have looked, Oklahoma State might be favored from here on out, but it isn’t that simple. Texas Tech, TCU and Kansas State already have big upsets on their resumes this season over Texas or Oklahoma. Texas is always going to be athletic. Kansas is undefeated. And, despite starting the conference slate 0-2, Oklahoma is still Oklahoma.

So, strap in because Saturday’s big win doesn’t guarantee the Cowboys a spot in Arlington, but it sure is a good start.