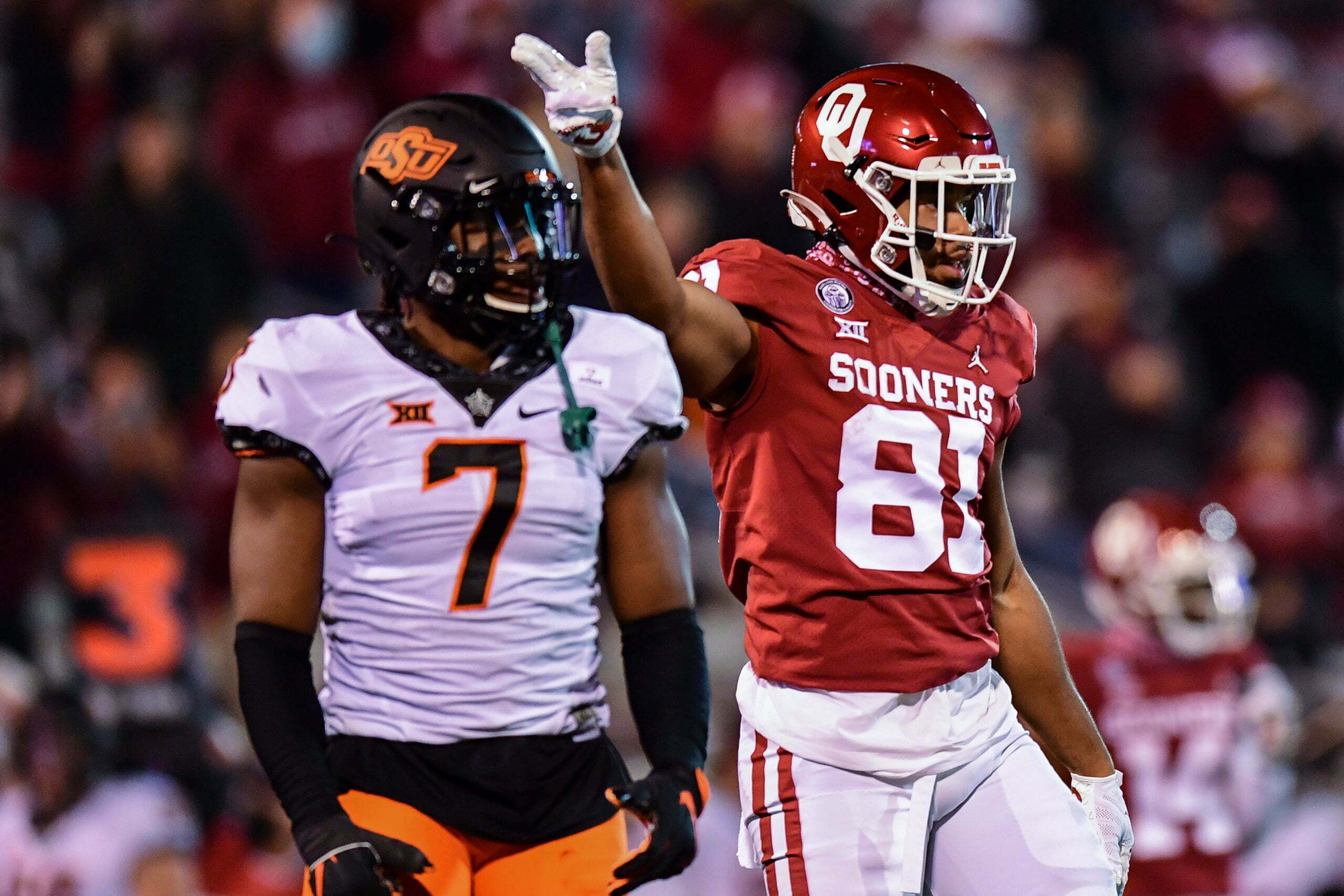 The Cowboys are now 7-19 in Bedlam since I arrived on this planet.

Oklahoma State fell to Oklahoma 41-13 on Saturday in Norman in a ranked matchup that didn’t live up to its billing. Here are 10 thoughts from the contest.

1. The First Quarter Was All It Took

It was like the Sooners threw a stun grenade at OSU at the opening whistle, and when the Cowboys came to their senses, they were down 21-0.

It took OU less than 10 minutes to gain that lead, and it looked as if the Sooners might compete with the 75-0 beatdown they put on the Pokes in 1904.

OSU then showed a sliver of life, but not nearly enough to overcome that.

At one point, OU had 21 points and OSU had 2 total yards. The Cowboys just weren’t nearly as ready to play as OU was Saturday night.

Spencer Sanders got shaken up on a first-quarter sack, prompting OSU to turn to Shane Illingworth for the first time since Sanders’ return from his early-season injury.

Illingworth promptly threw a touchdown and led two drives that ended in field goals. But after that, not a lot happened.

There was a portion of the OSU fanbase calling for Illingworth to be the guy (the backup QB is always the most popular guy on the team). When Illingworth threw that first-quarter touchdown, that might have became the popular opinion.

But further data points for Illingworth probably proved Sanders is and should be the guy for OSU.

Illingworth finished 5-for-21 (24 percent) for 71 yards and a touchdown. He went on a dreadful 1-for-14 streak before Gundy made the switch back to QB1.

Sanders returned (from injury or otherwise) in the fourth quarter, where OSU’s offense found its footing (relatively). He finished 10-for-19 for 97 yards and an interception.

Illingworth was serviceable when he filled in for Sanders when OSU’s starter was injured in the Tulsa game. But there wasn’t a ton of data on Illingworth against solid competition. He’s shown he may be the QB of the future, but he might not be ready to be the QB of the present.

He was 19-for-26 for 218 yards, no touchdowns and an interception against Tulsa and West Virginia. His Kansas outing inflated those averages. He was 17-for-23 for 265 yards and three touchdowns against the Jayhawks.

Illingworth is still going to be a good college quarterback some day, but as a true freshman in a year where preseason practice was limited, it was always going to be tough for him to be able to compete with the Big 12’s elite.

There was a lot of good news on the injury front for the Cowboys entering the game, but that somewhat quickly got turned on its head.

Jake Springfield returned to his role as OSU’s starting left tackle after leaving the Texas game with an injury.

Still down Hunter Anthony (who suited up Saturday) and Cole Birmingham, that returned OSU’s O-line to:

However, Teven Jenkins, a soon to be NFL right tackle, got hurt during the game and didn’t return, causing a new shift that made OSU’s O-Line:

This is obviously a big part of the struggles OSU’s offense has had this season, and it isn’t anyone’s fault. But offenses that are struggling aren’t going to get helped by giving up four sacks and four QB hurries like what happened Saturday.

All-Canadian American running back Chuba Hubbard has been below 100 percent for at least the past few weeks.

After having four games of at least 30 carries last season, Hubbard has only had four games of 20 carries in 2020. He had just six touches against Kansas State and had only eight in Bedlam.

His eight were solid, though, despite an ankle that was clearly hobbling him. Hubbard was fiery all evening in what could be his last Bedlam game. He gained 44 yards, coming out to a 5.5 yard per carry average.

He looked more like his hard-running, forward-falling self Saturday than he has in a while.

I already hit a little bit on this at the beginning, so we won’t spend too much time here, but the Sooners didn’t have much of an issue putting points on what was, statistically, the Big 12’s best defense.

Jim Knowles’ bunch was able to stabilize, though, giving up just 6 points between when there was 6:09 left in the first quarter to 14:15 left in the fourth.

There was more bad than good, but there was at least some good.

That brings me to my next point, though, in that Trace Ford and Tyler Lacy had solid games.

The best part about that statement for OSU is that they’re both sophomores.

The pair combined for 10 total tackles, 1.5 sacks, 2.5 tackles for loss and a quarterback hurry. Ford’s praises have been sung off the mountaintops this season, but Lacy’s emergence has been more lowkey.

Statically, Lacy actually had a better game than Ford, recording six tackles, a sack and two tackles for loss.

I’m not sure whether one or both will be able to make an early jump to the NFL, but OSU fans will for sure take at least one more season of these two getting after Big 12 quarterbacks.

Generally, I can see the argument as to why coaches punt at the behest of their fanbase, but in one instance late in Saturday’s game, I didn’t get it at all.

OSU was down 21 with about 12 minutes to go in OU’s territory, and Mike Gundy and Co. decided to punt the ball away on 4th-and-8.

Tom Hutton delivered an outstanding punt, pinning OU at its 1-yard line, but then Rhamondre Stevenson rushed for 30 yards on the next play, essentially giving the Sooners the ball where they would’ve gotten it if OSU would’ve failed a fourth-down attempt.

It was just weird to see OSU not quit after instantly being down 21-0 to seemingly raising the white flag after the Cowboys were able to stabilize and had a chance to cut it to a two-score game.

8. The Sooners Have Found Their Form

Coming into this game, I was unsure how good OU actually was.

Sure the Sooners looked better in their past couple of games, but it came against weak competition. Against a one-loss team, Spencer Rattler and Co, didn’t slow down.

If it does come down to an Iowa State/OU rematch in the Big 12 title game, that should be a fun one. Especially considering Iowa State blanked K-State 45-0 on Saturday.

9. Road to Big 12 Championship Gets Complicated

This is a post that me or someone on the site will get to Sunday, but OSU’s chances at making the Big 12 title game are quite convoluted now.

OSU just needs to finish second in the conference, but that gets tough because the Cowboys lost their head-to-head matchups with OU and Texas.

The way the Big 12 tiebreaker works is that if two teams are tied, it goes to the head-to-head game.

If three or more teams are tied, all this madness happens:

If only two teams remain tied after any step, the winner of the regular season game between the two tied teams shall prevail.

So, yeah, that gets a little crazy. But if I’m reading it correctly, if OU, UT and OSU finished T2, OU would go ahead because OSU would be third in the “mini round-robin,” leaving OU and UT tied, where OU has the head-to-head.

So, the Cowboys would do good from winning out and UT and OU each losing another game.

10. What Are Reasonable Expectations Now?

This was supposed to be the year for the Cowboys, but that all seems unlikely now. So, where do the expectations reset?

OSU should be favorites in its remaining games coming against Texas Tech, TCU and Baylor, teams that are eighth, seventh and ninth in the Big 12, respectively. So, the expectation should be to finish the season 8-2.

That’s as many wins as OSU had last season despite two fewer regular season games. It’s a win higher than 2018, again with fewer games.

Who knows what bowl games will look like in 2020, but that should be enough to get the Pokes into a decent bowl.

Would that make this season a failure? A success? Wait and see how the bowl game goes if there is one? I’m not sure considering how upside down this season has been.